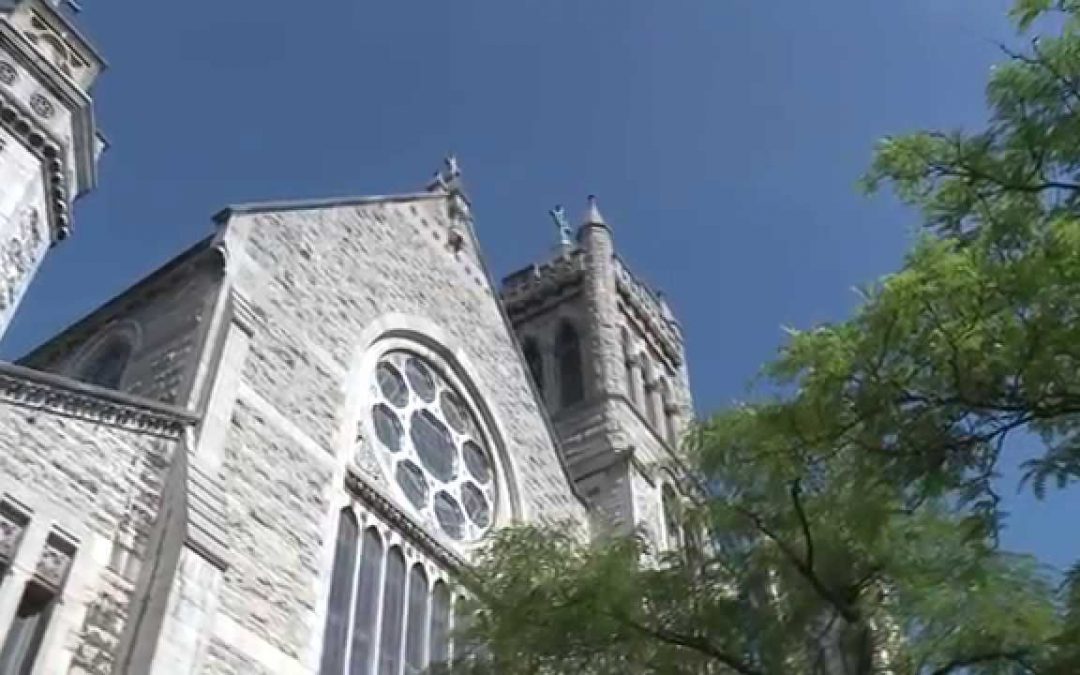 Deacon Nick Alvaro is well-informed about Acts of the Apostles Chapter 6, and understandably so. That chapter focuses on the first deacons of the Church, including St. Stephen.

A stained-glass window depicting St. Stephen is part of the newly renovated Cathedral of the Immaculate Conception in Syracuse. The Deacon Community of the Diocese of Syracuse, including Deacon Alvaro, memorialized the window.

“Well, you want to be a part of it, because … the Cathedral is the mother church — this is our home,” he said. “This is the seat of the whole diocese. … It’s like as you grow up you’ve got that feeling of home.”

Chapter 6 of the Acts says that St. Stephen had the face of an angel and spoke with spirit. On Sept. 8, a chancery conference room across from the Cathedral was filled with spirit as deacons and priests got reacquainted in preparation for the rededication Mass.

“Stephen spoke out and was then martyred,” Deacon Alvaro said. “So that becomes a symbol for all of us as well.”

He had not yet seen the new interior of the Cathedral.

“At ordination,” he said, “you have that first excitement as you walk through the doors into home. I’m going to hopefully have that same excitement.”

Deacon Michael Colabufo, who also contributed to the memorialization of the stained-glass window, always appears to be excited, enthusiastic. On this day he was especially eager to speak.

“Each time there’s a liturgical service that the deacons participate in at the cathedral,” he said, “by looking at that window we will remember our role and our journey along with Stephen to this day to keep bringing Christ to the world and being an example of Christ in the world today.”

Of the whole renovation project, he said, “I think it adds a sense of renewal and inspiration to those that come to the Cathedral as the mother church. … By renovating it, hopefully it rejuvenates our desire to continue our faith journey in the Diocese of Syracuse.”

“I think the renovation is absolutely magnificent,” added Deacon Dean Brainard. “It’s a beautiful memorial to not only the diocese but also the community of God here. … It’s just beautiful to see the outpouring of the community. … It’s hopeful for the diocese.”

Deacon Burke, who is based at the Cathedral, was asked how he thought the renovation came out.

“It’s beautiful,” he said. “Actually my favorite parts are the Stations of the Cross. Because if you look at the Stations before, they were very nondescript. Now … they really stand out. And it’s such an important part of the whole.”

He added: “They did a beautiful job. They made the chapel into the gathering space, which we’ve been using for Masses for the last several months. And that’s very comfortable. All of the meeting rooms and the offices have all been redone and some of them made new. It’s very comfortable, and it’s inviting. It’s something that I think is going to hold together for a long time.”

The dozens of deacons and priests who participated in the rededication don’t see one another very often, Deacon Burke said: “That’s why when they do they’re very into it.”

Father Joseph O’Connor, laying out the instructions for the rededication Mass — where to walk, the protocol for Holy Communion — had to project his voice through the crowded conference room and out into the hallway where the spillover clergy had gathered.

“Could you hear anything out there?” he inquired after his presentation.

Yes, they could. And soon, the procession began, deacons first in the line of clergy.