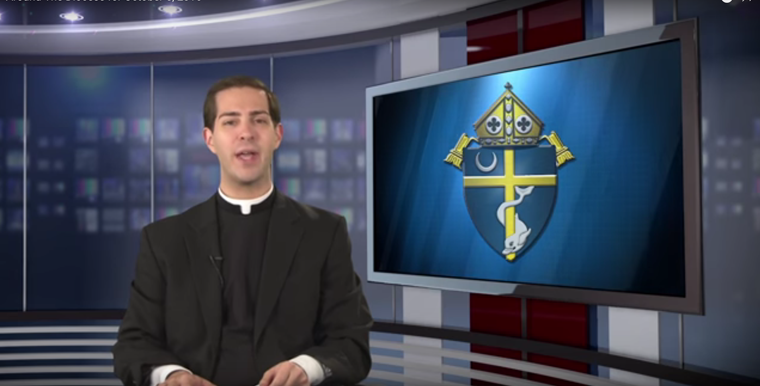 They started one year ago with a collar, a camera, and a collection of broadcast rookies.

Today they constitute the ever-informative team of “Around the Diocese,” a biweekly program that airs on the diocesan YouTube channel.

Whereas some broadcast outlets highlight the on-air talent in lieu of the subject matter, “Around the Diocese” emphasizes the stories: the clergy, parishes, schools, and youth groups in the diocese’s seven counties.

And “ATD,” as the team calls itself, packs several stories into less than the combined commercial time in the average TV show.

For example, the Oct. 5 edition of “ATD” totals 8 minutes, 58 seconds. The anchor, Father Christopher R. Seibt, introduces segments on Mercy in Action; the “40 Days for Life” campaign to end abortion; the Blessing of the Animals on the Feast of St. Francis at Purpose Farm in Baldwinsville; and the leader of Catholic Charities USA. The show ends with the “Media Minute,” which concerns a contest for identifying stained-glass windows.

Bishop Robert J. Cunningham, who appears in the “40 Days for Life” segment, said he sees the YouTube program as “one means of spreading the Gospel.”

Like so many communication opportunities, the program helps to unite the diocesan family, the bishop said. “We get to know about different things that are going on in different areas,” he said. “We’re one family of God and it’s good to know what other members of the family are doing. It helps us to know our brothers and sisters in the faith in various areas of the diocese, and truly even beyond sometimes.”

Asked about the team itself, Bishop Cunningham said, “We appreciate very much the people who work on the program and bring their cultivated gifts and put them at the service of the Church.”

Father Seibt, for example, braved the host duties despite having no formal training in communications other than public-speech classes in his seminary years. He also serves as Parochial Vicar of the Church of Sts. John and Andrew in Binghamton.

“This is new to me in a sense,” Father Seibt said of the anchor job, “so I really had to work at it first to get it down. … I’ve enjoyed it. I’ve really enjoyed growing in that role. … I’m grateful to be a part of it because it’s so important in our mission of evangelization.”

Father Seibt said he likes his role on the show because it helps strengthen people in their faith. “People do seem to be excited about it,” he said, “because they like to see what’s happening.”

Highlighting the Catholic schools always makes for a good story, he said, and the team is trying to figure out what else the people would like to see on the show. “What we try to do in stories,” he said, “is not just give factual information about what’s going on, but also to teach a little bit about our faith.”

For example, some stories originate in the diocesan evangelization office and the bishop’s office. He said the team tries to make the stories user-friendly.

That is a big part of Producer Rick Mossotti’s role too. He and Father Seibt write the show, and Mossotti shoots it and edits it.

“It’s been neat to meet all these people and be able to tell their stories,” he said. “It’s been terrific to go to all these different places I didn’t know existed: shrines, basilicas, and monasteries.”

He has noted the progress of his team: Father Seibt; Katherine Long, the editor of the Sun; and Nicole E. Ossevoort, communications and social media specialist for the diocese.

“It’s been great to watch the on-air talent grow into their positions,” Mossotti said. “They didn’t have any formal TV experience, and they’ve really gotten very good at it.”

“I think the best thing about “ATD,” Ossevoort said in an email, “is that it’s something new and different for us, and a YouTube news program is something that very few dioceses are doing. We have a strong team: Father Seibt is an excellent anchor — he’s a natural! — and despite our reluctance to be in front of the camera, both Katherine and I are getting more and more comfortable. I think the content is always interesting and appeals to the different audiences across our diocese.”

Diocesan Chancellor and Director of Communications Danielle Cummings praised the entire “ATD” crew. She said that a Syracuse news anchor watched “ATD” and tweeted her this about Father Seibt:

“OK, if he says, in the next shot, ‘Now I’m turning to weather,’ we’re going to hire him and take him away from you.’”

“ATD” exists because of the generosity of the people of the diocese, Chancellor Cummings said. She noted that Hope Appeal dollars provided the funding to buy new HD video equipment that helps bring stories to life.

Asked about the future of the program,    Chancellor Cummings said Father Seibt and Mossotti are talking about getting out into the field a little bit more so that people can see the show being put together. She would also like to show more international news, because people always want to see Pope Francis.

Ossevoort said she would like more “on location” filming as well. She would also like to air special editions of “ATD,” perhaps during Advent and Lent; a Catholic-schools-focused edition; and a look back at the previous year.

“It would also be interesting to have the occasional co-anchor sitting alongside Father Seibt,” she said.

For now, the YouTube viewers will see a solo Father Seibt deliver his tagline for every show:

“And remember that God is doing great things in each of us, and all around our diocese.”