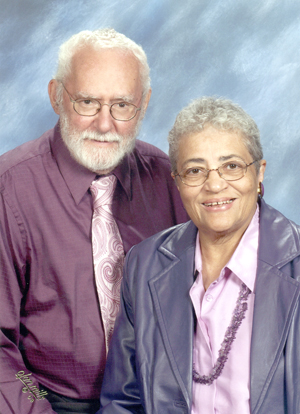 Dolores and John Brule will celebrate their 10th anniversary this month. They were married in St. Anthony of Padua church in Syracuse on Nov. 27, 1999.
Father James Pierce, SJ, officiated, assisted by Father Robert Chryst. Bishop Thomas Costello was the homilist. The sisters of Dolores and John were the witnesses and dear friends and members of both families completed the wedding party.
The family and their friends will celebrate the anniversary at Thanksgiving
time. The bride and groom have been actively working for social change for many years in church and community and they continue their involvement.  The union of the couple created an enhanced family of 13 children, 31 grandchildren and 18 great-grandchildren.
They have traveled extensively exploring new vistas and making friends around the world. For the past several years they have spent winters in Buenos Aires and while there, they serve as lectors in the church “Mother Most Admirable” during the English Mass on Sundays. In their early years their paths followed significantly different routes and their experiences enriched their lives because of their diversity. The vows they wrote included the thought: “together we will find our way.” In closing they told each other: “grow older with me for in God’s plan our youth was but the half. The best is yet to be.”