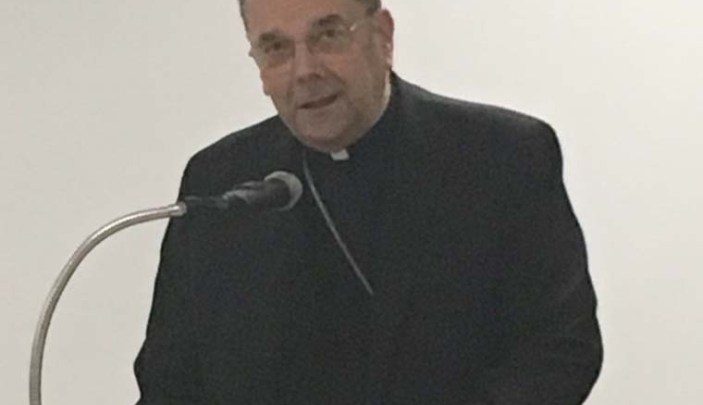 The Diocesan Pastoral Council (DPC) met at Bishop Grimes Jr./Sr. High School Sept. 8 to discuss a slate of issues, including developments related to clergy sexual abuse, parish reconfiguration, and the diaconate. The DPC is composed of pastoral council and ministry representatives from across the diocese.

The meeting got underway with remarks from Bishop Robert J. Cunningham, who addressed the summer’s ongoing revelations of clergy sexual abuse.

“A topic that we wish we did not have to discuss, but very honestly we do,” he said. “We need to be aware and conscious of this problem” and “see what we’ve done, where we’ve been, how we can improve.”

Bishop Cunningham spoke about the pain and confusion surrounding allegations of sexual abuse against Archbishop Theodore McCarrick, allegations made by former nuncio Archbishop Carlo Maria Vigano about knowledge of the abuse, and the August grand jury report detailing clergy sexual abuse in six dioceses in Pennsylvania before briefly turning to state Attorney General Barbara Underwood’s subpoena of the Diocese of Syracuse and New York’s seven other Catholic dioceses. Bishop Cunningham acknowledged that abuse changes a person’s life forever. He noted that safe environment policies and procedures implemented since 2002 have been effective. He encouraged everyone to participate in the Masses of Forgiveness being celebrated throughout the diocese the following weekend.

Msgr. James Lang, Vicar for Parishes, offered a look at some timely topics related to pastoral planning and parish reconfigurations in the diocese.

To provide a frame of reference for the pastoral planning work done and being done, Msgr. Lang provided statistics of baptisms, marriages, funerals, religious education enrollments, and other sacramental information in the diocese from 1974 to 2017. The numbers show significant decreases — with the exception of funerals, which have remained steady. Msgr. Lang noted the numbers show “the nature of our population, our business, our industry, the size of our families, and attitudes toward religion have changed.”

He also presented statistics on clergy — of the 100 priests currently available for assignment, 33 are under 60 years of age and 67 are over 60 — and parish configurations: 39 parishes “stand alone” under one roof, six parishes include a mission, and 30 parishes comprise multiple sites.

Msgr. Lang also presented an update on the work of the Oswego Catholic community, which is in the midst of a yearlong process to bring four parishes together as one faith community that will worship on one church campus. He noted that the work began with parish representatives analyzing sacramental and financial data and determining a new plan for the faith community was needed. A variety of committees have since been formed to help move the process forward, including those focused on Faith Formation, Traditions and Welcoming, Prayer and Worship, Evangelization and Community Building, Facilities and Real Estate, and Communications. The Steering Committee will coordinate, facilitate, and administer the recommendations made by the other committees. Msgr. Lang also noted that one of the faith community’s first efforts was selecting a name; earlier this summer, the faith community chose Christ the Good Shepherd as its patron. The community has set July 1, 2019, as its goal for locating on one church campus.

Deacon Greg Cross, director of the Office of the Permanent Diaconate, offered a look at the role of the deacon in today’s Church.

He noted that this year marks the 50th anniversary of the restoration of the permanent diaconate, though the Order of Deacon dates to apostolic times. Deacon Cross explained that the original deacons were chosen to help overcome cultural and language barriers and to serve as emissaries between the Apostles and the Greek-speaking faithful.

Deacon Cross described deacons today as emissaries from the bishop to the diocese and from the pastor to the parish. He explained they are ordained clergy and may be married and have secular jobs.

Currently in the diocese, there are 78 active deacons, 20 retired deacons, and five on a leave of absence. Ten men were ordained to the permanent diaconate in 2018; 14 are projected to be ordained in 2020 and 10 more in 2022.

Chancellor and Director of Communications Danielle Cummings provided an update on the diocese’s Independent Reconciliation and Compensation Program. Announced on Ash Wednesday, Feb. 14, the voluntary program run by independent administrators will determine monetary settlements for victim-survivors who previously notified the diocese of their abuse by diocesan clergy.

Cummings said the program is nearing conclusion and that a full accounting of participation and cost would be provided when it is complete, but offered the following insights on the program to date:

• Abuse allegations known to the diocese and included under the program date from 1941 to 1990.

• These allegations involve 40 priests, 17 of whom are still alive and permanently removed from ministry.

• Claim packets were sent to 84 individuals, inviting them to participate in the program.

• About 70 percent of those individuals have accepted settlements.

Cummings said that the overall response to the program has been “extremely positive.” She underlined that the program is being funded through the diocese’s general liability program and that no donations given to the HOPE Appeal, the Heritage Campaign, or the Cathedral Restoration would be used, nor would parishes be assessed.

While nothing can change the past, the intent of the program was “to move from providing counseling to providing a gesture, to help people move forward a little bit further, to reach reconciliation and hopefully forgiveness,” Cummings said. “And I can tell you personally, I have seen that.”

Jacqueline Bressette, Director of Safe Environment and Victim Assistance, gave an overview of efforts to prevent and address abuse in the diocese.

First and foremost, all clergy, religious, parish and diocesan employees, and volunteers whose ministry or role places them in regular contact with children, young people, or vulnerable adults are required to complete Safe Environment training and pass a criminal background check. Recertification training is required every five years. Since 2002, 41,000 individuals have been trained. Additionally, more than 15,000 Catholic school and faith formation students received Safe Environment training last year. Bressette later noted that, after two years of work, the office has updated its Safe Environment training, which includes an updated code of conduct.

In her role as Victim Assistance Coordinator, Bressette receives and responds to allegations of abuse.

When a complaint is reported, she explained, victims are encouraged to report it to the relevant District Attorney’s office, and the diocese itself refers the complaint to the appropriate DA.The diocese does not begin an investigation of a complaint until the civil authorities have completed their investigation.

The diocese contracts an outside firm, AMRIC Associates, to interview the victim, the accused clergy, and others during its investigations. These findings and supporting documents are presented to the Diocesan Review Board, which determines if the allegation is credible, not credible, or unsubstantiated.

The Review Board is “a confidential, consultative body whose primary purpose is to assist the diocesan bishop in making a determination of a cleric’s suitability for ministry upon receipt of an allegation of sexual abuse,” Bressette explained. Current board members are Christine Larkin; Valerie Brogan; Catherine Diane, LCSW; Sister Grace Anne Dillenschneider, OSF; Father John J. Kurgan; and Robert B. Murrett.

The Review Board presents its recommendations to the bishop, who then begins canonical action as necessary.

The meeting closed with a question-and-answer session with Bishop Cunningham. The next meeting of the DPC will be held November 17.