A beautiful vision in Broome 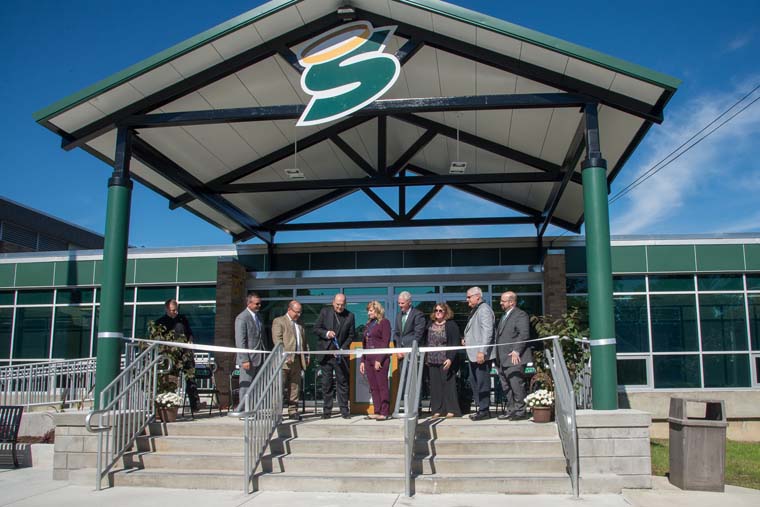 A neighbor called a school official and said, “‘It is so beautiful. My husband and I stare at that school all the time when we’re sitting out on our porch.’” 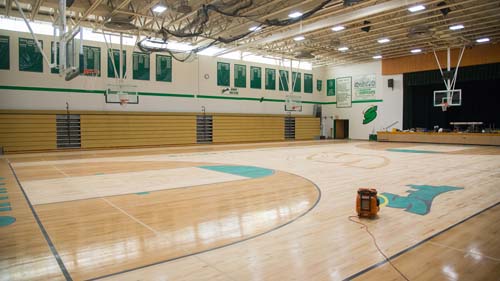 Dozens of people were staring at the improvements Oct. 5 when Bishop Robert J. Cunningham cut the ribbon and blessed the school’s new façade, renovated gym, and refurbished library/learning center.

The façade features a big awning with tall pillars, shiny silver railings, and an upturned crest — a suspended three-foot “S” with a halo.

Dr. Elizabeth Carter, president of Catholic Schools of Broome County, agrees with the dazzled neighbor who called her up. “It really makes the school look so much more modern and beautiful,” Dr. Carter said.

She added: “We are very blessed at the Catholic Schools of Broome County to have such generous donors and loyal supporters. The campaign gifts we received have enabled us to complete some major renovations, enhance academic, athletic, and performing arts programs as well as provide scholarships for students in need. We are forever grateful!”

The campaign, called “A Shared Vision that Will Enrich Our Future,” has raised $3 million in pledges since the fall of 2016, said Jason Giblin, controller for Seton and the system’s three elementary schools. The schools have spent just over $1M on various projects, with $225,000 left to raise. Around 50 percent of the system’s students receive some form of tuition assistance through many generous supporters and benefactors, including the local parishes and the Diocese of Syracuse, Giblin said.

A TINT OF GREEN

Just inside Seton’s new entranceway, the new double-pane windows are tinted green to conform with the Saints’ theme; the days of inefficient windows and a sweltering hallway are gone. Winter should also be comfortable for students who love sitting on the inside ledge by the windows.

Here are some other projects that have been completed:

• New LED lighting (saving over $10,000 annually) and ceilings at Seton

Here are projects to be completed:

• Program for students with special needs

• New lighting at All Saints and St. John’s elementary schools 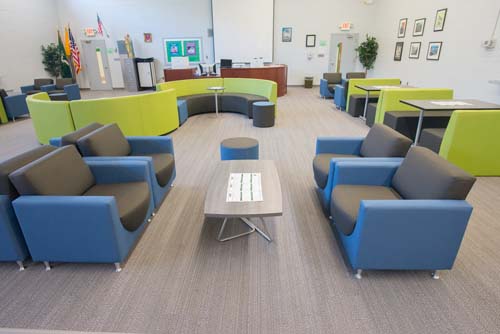 Bishop Cunningham said all science and teachings about the world and about human life that we pursue “must have as their final purpose to bring us to a knowledge of the truth and to the worship of the true God today as we ask God’s blessing on Seton Catholic.” The bishop said students must “join in the discoveries of human wisdom with the truth of the Gospel so that they will be able to keep the true faith and to live up to it in their lives.”

Seton senior Marina Maerkl, the captain of the soccer and basketball teams, said the new façade “makes the school look more appealing, but I think it really emphasizes how we’re all united as a school community. The big ‘S’ on the front of the school really represents who we are and what we stand for.”

Also the president of many clubs, she was asked which of her activities will benefit the most from the renovations.

“Probably basketball,” she said, because with the old court, “you would go to bounce a ball in a certain spot and it just wouldn’t come back up to you.”

Senior Sophia Czabala, who is on the student council, said the improvements offer a “great new environment” as the seniors ponder the “toughest time of our high school career trying to figure out all of our life decisions.”

She loves the couches and the mini-tables — perfect for study tools like Chromebooks — in the new library/learning center.

Junior Fritz Huff, who is also on the student council, said, “It’s a totally different feeling early in the morning getting up and walking through the doors.” He noted that during Catholic Schools Week all the elementary schools visit for Mass in the gym, “so it’ll just make it that much nicer.”

The shiny new gym floor looks like a clever combination of woods from different trees, with large Seton insignias and turquoise domes at the top of the basketball court’s keys. The sparkling space was dedicated as the William “Pete” Gallagher Gymnasium. Seton Principal Matthew Martinkovic noted that the late Mr. Gallagher, “the Saints’ No. 1 fan for sure,” served as superintendent of Broome’s Catholic schools. His two youngest grandchildren, Red Gallagher and Bridget Martin, are sophomores at Seton and both play basketball.

“It’s beyond our expectations as far as how the resource center came out,” John said, “and the gym is 99.9 percent done. … And the façade came out great, and the programs that they’re starting are really impressive.” John is chairman of Mirabito Holdings Inc., chairman of the board of Broome’s Catholic schools, and co-chair of the capital campaign with Micki Mathews and Maynard Fahs. John Mirabito’s family has pledged $1M to the capital campaign. 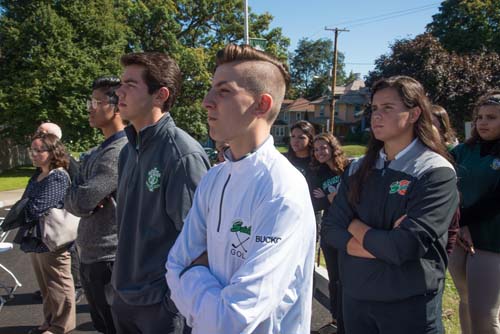 The upgrades at Seton Catholic Central have gotten high marks from the students.

“The overall purpose of our campaign … is to help our students achieve success,” John said, “but also to cultivate what I call ‘public-spirited generosity.’ … If you are not currently a supporter of the campaign, maybe something that you hear or see today will inspire you.”

His sister RoseMarie, a former teacher in the Sidney Central Schools and now a resident of Jensen Beach, Fla., said her mother asked her to speak for her at the dedication.

The Mirabito learning center, RoseMarie said, “will give Seton students access to the latest innovations and technology; a place to study and to collaborate on projects. Times change, educational needs change, and we must meet the challenges of these fast-changing times. I hope the students will take advantage of these new resources that are now available to them.”

“I see students doing more schoolwork in the student learning enter now than they did before,” said Leslie Thesier, who teaches 10th– to 12th-grade math.

Joseph Ryan, a 2017 graduate of Seton Catholic, said the books that used to be in the learning center have been moved to various classrooms. One book, a Bible, remains in the learning center. “Yes. It’s the important one,” said Ryan, who is a seminarian at St. John’s University in Queens. Seton Catholic, he said, “definitely gave me the foundations that allowed me to move along in my life the way I’m going.”

Another Seton grad (’96) in attendance was Kim Ehret, the Broome Catholic schools’ director of institutional advancement. She hopes the renovations open the doors of Seton to “new families that want a more modern, fresh look” to their children’s school.

While presenting the schools to prospective families, John Kiereck, director of admissions and enrollment for the school system, uses the phrase “faith, family, and academic excellence.” He said the system has just under 1,000 students in pre-K through 12th grade. “We are a choice for the greater Binghamton area, and even northern Pennsylvania,” he said.

An hour or so after the ceremonies ended, a white car pulled in front of Seton. It stopped, and the driver appeared to be taking photos of the façade.