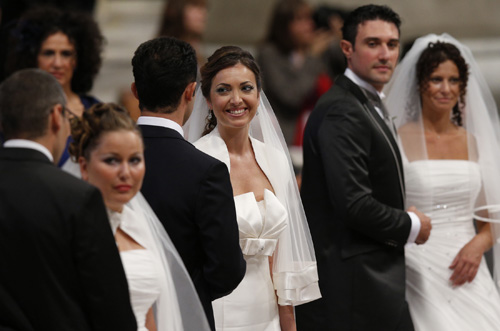 VATICAN CITY (CNS) — Eleven cardinals, at least four of whom will participate in the world Synod of Bishops on the family in October, have urged fellow church leaders to maintain the church’s rules regarding marriage and strengthen Catholic education about marriage and family life.

Their book, Eleven Cardinals Speak on Marriage and the Family, is scheduled to be released in English in the United States Sept. 15 by Ignatius Press, which provided copies in advance to the media.

With the contributing cardinals coming from Europe, Asia, South America and Africa, the essays include personal pastoral reflections as well as urge extreme caution in considering any plan to readmit to Communion Catholics who have divorced and remarried civilly without having received an annulment.

While several of the cardinals insist that the media in general and many church leaders mistakenly tried to make it appear that the situation of the divorced and remarried was the primary focus of 2014 extraordinary Synod of Bishops, most of the 11 essays also discuss the problem. The issue is expected to be raised again at the world Synod of Bishops on the family Oct. 4-25.

Italian Cardinal Carlo Caffarra of Bologna, who was not elected by his peers to attend the synod, said showing mercy to such couples without requiring their conversion — demonstrated by at least refraining from sexual relations with the new spouse — “is the mistaken pity of an incompetent and/or weak physician who contents himself with bandaging wounds without treating them.”

German Cardinal Paul Cordes, the retired head of the Pontifical Council “Cor Unum,” knows for a fact how long some church leaders and theologians have been seeking a possible penitential process or other procedure that would allow the divorced and remarried to receive Communion without an annulment or that promise of sexual abstinence.

In the 1970s, he was appointed secretary of a task force set up by the bishops of Germany, Switzerland and Austria to find what he described as a “loophole of mercy.” The experience, he wrote, proved that even “theological and canonical acrobatics” cannot defend giving those couples Communion while effectively teaching that marriage is indissoluble.

Dutch Cardinal Willem Jacobus Eijk of Utrecht, who was elected to the synod, said it is neither pastoral nor merciful for the church’s ministers to pretend that without an annulment a civil remarriage is anything other than “a form of structured and institutionalized adultery.”

But one change in church practice absolutely must occur, he said. After decades of weak catechesis, “true pastoral ministry” means presenting church teaching, “transmitting and explaining its foundations more adequately and clearly than we have done in the last half century.”

Czech Cardinal Dominik Duka of Prague, who was not elected to the synod by the Czech bishops, also placed at least some of the blame on the failures of the church’s ministers. Too many Catholics, he said, have no idea what it means to give their word and make a vow forever.

“The synod should never forget the past and present scandal of the basic destruction of the word” seen in the broken “promises of a large number of religious and priests in the latter half of the past century,” he wrote. It is “a scandal that we must confess humbly in the presence of husbands and wives who, amid the thousand difficulties of their life in this era of degradation, are fighting to remain faithful to their promise, to their word, to the oath that they made to each other and to God.”

All of the cardinals emphasized the importance of marriage preparation and the fact that it cannot be just a weekend of talks a few months before the wedding. It begins in the family with real examples of love, care, self-sacrifice, sharing and celebrating together.

Guinean Cardinal Robert Sarah, who as prefect of the Congregation for Divine Worship and the Sacraments is automatically a member of the synod, urged the church’s ministers to find committed Catholic couples to serve as witnesses to Catholic youths.

“Even though deep down they desire an indissoluble union,” he said, too many young people “cannot manage to believe that it is possible. This is a crisis of trust and faith in God and consequently a crisis of confidence in human love and in the human ability to be faithful.”

Venezuelan Cardinal Jorge Urosa Savino of Caracas, who is not one of his country’s delegates to the synod, urged a renewed emphasis on how seriously the Catholic Church takes the vocation of marriage.

“The church not only promotes, praises and defends marriage, but also celebrates it liturgically,” he noted. “In fact, she considers it one of the seven sacraments, instruments and signs of grace and salvation for the contracting parties and their children, and gives it a legal structure so as to protect the rights and specify the duties of the spouses.”

While it is true that growing segments of societies across the globe no longer understand marriage the way the church does, that does not mean the church should “yield,” he wrote. “The truth does not depend on acceptance by a majority. Neither does pastoral practice.”