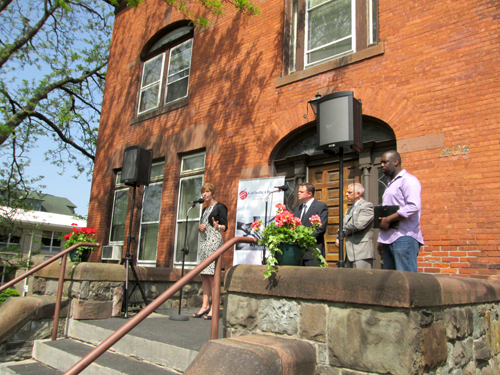 Grady’s Way will soon be more than just one man’s philosophy of benevolence in Utica.

Grady Faulkner helps troubled students. And in about 18 months, the Grady’s Way emergency shelter for homeless boys ages 12 to 18 is scheduled to open in a three-story red-brick building on Genesee Street.

The shelter is a project of Catholic Charities of Oneida/Madison Counties, which has owned the building at 1404 Genesee St. for a number of years. Renovations are estimated at $1.2 million.

Denise L. Cavanaugh, executive director of Catholic Charities, said Grady’s Way will have 11-13 beds, and boys will stay there for 30-90 days. Programming will include life-skills development and tutoring, if necessary. Youths will be self-referred, or they will be referred by their school, their family, or the county.

According to Catholic Charities’ written summary of the shelter plan, the facility will “respond to the needs of youth in crisis, including food, clothing, emergency shelter, treatment, referrals, and long term planning.”

The problem of homeless children in Utica has been bothering Faulkner, a parent liaison for the school district, for at least six years. About one year ago, Faulkner and Steve Darman, Mohawk Valley Housing & Homeless Coalition chairman, approached Catholic Charities to consider taking on the project.

Executive Director Cavanaugh thought it was a great idea. She explained why in her speech on the wide stone Romanesque Revival front porch of the future shelter:

“I’m going to make a big assumption here that all of you had a good night’s sleep last night. … I’m going to guess that you had a bed, you had a pillow, you had a blanket, roof over your head, maybe a fan on, an air conditioner, refrigerator where you could grab a snack.

“Well, the youth in our area, some youth, right here, in our city, in our county, didn’t have that luxury last night. Can you imagine going to school, and your focus being, Where am I going tonight? How do you study? How do you take a test? How do you learn, when you don’t know where you’re going to go?

“You might have been couch surfing, which is a popular term for staying at friends’, colleagues’ [homes]. Maybe their parents got sick of you, so now what? You find an abandoned house, a corner on a street by a Dumpster. You walk the streets all night, ducking into an alley, so the police cruiser that goes by doesn’t identify you. You’re not going home, because the abuse at home, sexual abuse, physical abuse, drugs being sold out of your home, any number of reasons.

“And what are the risks once you’re on the street? More assault? Drug use? Anxiety? Sex trading? Depression? Suicidal tendencies? That’s what our youth are facing.”

Darman said that according to a 2011 survey of 2,233 seventh-, ninth-, and 11th-graders in Oneida County schools, 121 of them said they were homeless and on their own in the past 12 months. He said the survey was conducted by the Herkimer-Oneida Counties Comprehensive Planning Program.

According to a 2015 survey by the same program, about 2 percent of teens in Oneida County reported that they were homeless with their family for a week or longer during the past year.

Homeless children are called the “invisible youth,” Darman said, because they hide out from adults. There can be serious conflicts in these children’s homes, and they are not safe when they leave, he said.

They are very vulnerable, he said, and they engage in high-risk survival behavior. “They get involved in sex trafficking,” he said. “They get picked off by older adults that traffic them. We’ve rescued a number of young people that wound up getting victimized in that way.“ The youths were placed in a transitional housing program, he said.

“You’ve got to have a safe place for these young people to go,” Darman said.

That’s why Catholic Charities is going ahead with the Grady’s Way project.

“It’s kind of hard to put a number … on it [youth homelessness], because a lot of kids don’t identify themselves as homeless,” said Victoria Paolozzi, development director for Catholic Charities. “They don’t want to admit that they’re homeless. They are bouncing from couch to couch, friend to friend, staying wherever they can.”

Catholic Charities Board President Jason Gugnacki said there is a major need for a shelter for homeless children. “So now they will have a place that they can seek the help that they need to get on the right track,” he said.

Oneida County Executive Anthony J. Picente, Jr. said Grady’s Way addresses important questions for young men: “Where do they go? What do they have? Who’s looking after them? Do they have shelter? Do they have a place that somebody cares about them? And who helps them get to the next step?”

Picente said the county stands eager to be a part of the shelter as it goes forward.

Picente, Darman, and Cavanaugh all praised Faulkner for his vision as he lobbied for the shelter that will bear his name. An early proposed title for the shelter was Grady’s Home, but it eventually became Grady’s Way.

“It is an honor; I’m pleased with it,” Faulkner said.

Asked about the genesis of the project, he recalled that a colleague had complimented his work with children in the school district. “So we looked into what we need to do,” he said. “And I put some things on paper.
And came up with a plan.”

Faulkner has worked in the school district for 19½ years, including his current nine-year stint as a parent liaison.

A tall man, Faulkner constantly scans for signs of distress among the youth. And he listens carefully, too.

Asked how he gets an inkling that a child has a problem, he said, “You just see how they behave. You have a kid that’s coming to school every single day, and they’re putting their head down, or they’re not talking to people.” Other signs of trouble include acting out and misbehaving in school.

“I talk to them,” Faulkner said. “I talk and see how everything’s going, and you find out once they get your trust, they will tell you a lot of things.”

“Grady works with these children, these youths, every single day,” Catholic Charities’ Cavanaugh said. “And he’ll text me over the weekend and say, ‘I got a call. There’s a kid that doesn’t have a place to stay; what are we going to do?’”

Faulkner works on behalf of eighth-graders at Donovan Middle School. “I’m in the middle between the home and the school,” he said. “I’m the liaison.”

“I’ve done it for so long,” he said, “and I was a student myself. I know. My friends at points were homeless at school. They either misbehaved, or they did stuff to get in trouble. It was just different things, different telltale signs.”

Homeless youths might be living under a bridge, or in cars, he said. “They’re staying with a friend for two days, and staying with another friend for a few days, staying with an aunt for another couple of days. They find ways to survive. They’ll stay at the Hotel Utica.”

He said everybody thinks homelessness means living on the street with dirty clothes, but there are other people “that are walking around Utica homeless that do have nice clothes.” They might get those clothes at the Salvation Army, or perhaps they borrow them.

“So homelessness is not the typical New York City living in the train station; that’s the old look,” he said. “The new look is them playing a part. And a lot of the kids, they play a part. They wear the nice clothes to make people think they’re not homeless.

To pay for Grady’s Way, Catholic Charities will pursue funding from multiple sources. The organization will apply for a Homeless Housing and Assistance Program (HHAP) grant from the state Office of Temporary and Disability Assistance.

Anthony Farmer, assistant director of public information for that office, said in an email:

“HHAP funding is awarded through an open, competitive process. Catholic Charities is welcome to submit an application for consideration. Applicants are required to document the need for the project in the application, which is part of the scoring rubric.”

Farmer added: “Statewide, the historic level of homelessness is well-documented. We have funded multiple projects in Central New York and the Utica area specifically – most recently Johnson Park Apartments ($2.6 M for an 8-unit project for families awarded in December 2015), which is one of several projects HHAP has funded with that agency (JCTOD Outreach).”

Cavanaugh said the HHAP grant would be for the bulk of the renovation.  Catholic Charities will also seek funding from private donors, The Community Foundation, United Way, Oneida County Youth Bureau, Oneida County DSS, City of Utica, and other appropriate federal and state grants.

The Grady’s Way building is impressive even before the renovations begin.

The architect working on the project, Chuck Tomaselli of C. Lewis Tomaselli Architects of Utica, said the structure features a combination of Romanesque and Dutch-Normandy styles. It includes Romanesque Revival stonework on the base, a Palladian window, and a gambrel roof. The interior of the building includes eight marble fireplaces, oak paneling, custom windows, and high ceilings.