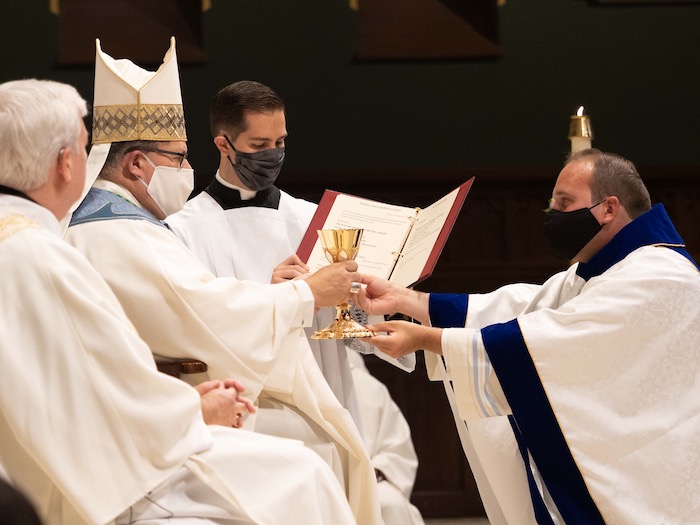 A day long anticipated was joyfully celebrated Aug. 15 as Father Malachi Clark was ordained the newest priest of the Diocese of Syracuse by Bishop Douglas J. Lucia at the Cathedral of the Immaculate Conception.

As he blessed family members and friends in the warm sunshine following Mass, a beaming Father Clark said he was feeling “a lot of joy, a lot of gratitude — and just humbled.”

During the Mass, Bishop Lucia commended the Clark family, noting that it takes a village to raise a child “but it takes a family to raise a vocation.”

Father Clark, 28, is the youngest of Courtney and Mari Jo Clark’s eight children. He is Uncle Malachi to 65 nieces and nephews; his young nephew, Ezekiel, was among the altar servers assisting at the ordination Mass.

Father Clark credits his family for supporting him throughout his discernment and formation for the priesthood. “They’ve loved me, they’ve cared for me, prayed for me, and challenged me — and they keep me from taking myself too seriously,” he told the Sun in an interview before his ordination.

Father Clark said his calling came solely “because of His goodness alone. It’s not [because] of any qualities I possess, not of any strength that I have, it’s only [through] God’s goodness alone that I’ve been called.”

The first seed of a vocation was planted when he was just three or four years old, he recalled. “I just remember looking up and seeing Father at the altar…. It was a growing sense of, ‘maybe that’s what I want to do with my life,’” Father Clark said.

Those thoughts “took a little bit of a hiatus” during his teenage years, “although even there, it was in the back of my mind,” he said. “I started more seriously thinking about it when I was 16 or 17,”  and in 2012, he entered Cathedral Seminary in Douglaston, N.Y., graduating with a B.A. in Philosophy at St. John’s University in 2015. In the fall of 2015, he entered St. Mary’s Seminary and University in Baltimore, Md., graduating with a M.A. in Theology this spring.

The last few years of formation, however, brought unanticipated challenges and surprises for Father Clark.

In November 2017, soon after beginning his pastoral year of service at Holy Family Church in Syracuse, Father Clark was diagnosed with testicular cancer. After multiple surgeries, 12 weeks of chemotherapy, and countless prayers, he was declared cancer-free. He remains in remission today. “There’s still the usual exhaustion and all that, but I’m doing what I can,” Father Clark said. He called the experience the “crucible in which I was formed.”

Having “been in a place of deep fear before” also gives him a unique perspective during this time of the coronavirus pandemic, he explained. He tries to “show another way of living for this time”: a way of love. “It’s very difficult to not let the fear stop us from living in God’s love and light and truth and beauty,” he said.

The pandemic cut Father Clark’s final semester at seminary short as St. Mary’s, like many other colleges and schools, closed in mid-March. He returned to Holy Family, where he’s been ministering since St. Patrick’s Day, and he finished up his semester remotely via online classes, recorded lectures, and independent study.

And of course, his ordination was postponed due to the pandemic as well. But Father Clark called the rescheduled date, August 15, the Feast of the Assumption of the Blessed Virgin Mary, auspicious “because Mary has been a huge companion in my journey of faith.”

Bishop Lucia drew on Mary’s great example of faith as he preached a homily specifically for Father Clark — the first priest Bishop Lucia ordained for the diocese since being installed as Syracuse’s 11th bishop Aug. 8, 2019.

“Mary’s total gift of self in salvation history can be the model for your own priestly life and service,” the bishop said. He also cited Mary’s spirit of service to others and her spirit of profound prayerfulness.

“The Acts of the Apostles reminds us of Mary’s devotedness to prayer and her prayer for the coming of the Holy Spirit within the Church,” Bishop Lucia said. “St. Teresa of Kolkata once said, ‘Prayer enlarges the heart until it is capable of containing God’s gift of himself.’ This is what prayer did for Mary, and Malachi this is what prayer must do for you as you respond to his call to be ‘in persona Christi captis,’ ‘in the person of Christ the head,’ in the Church and in the world today. Remember not only the gift you are in God’s eyes, but also the gift you are meant to open so that the world may know that God is with us.”

Following the homily, Father Clark declared himself willing to be ordained. He promised his obedience to Bishop Lucia and his successors, then kneeled and placed his hands inside the bishop’s.

Father Clark then prostrated himself in the sanctuary, signifying his submission to God’s will, as the congregation prayed the Litany of Supplication.

Following the litany, Bishop Lucia placed his hands on Father Clark’s head in silent prayer, a sign of consecration to the Order of the Priesthood. The bishop then offered the Prayer of Ordination, completing the Sacrament of Ordination.

Father Clark was vested in stole and chasuble by two priests who he called “key figures” in his vocation: Msgr. Michael Meagher, pastor of his home parish, Saints John and Andrew in Binghamton; and Rev. Canon John Mikalajunas, his childhood pastor, who is now pastor of Holy Trinity Church in Utica.

“I served Mass with [Father Mikalajunas] every day growing up. He is yet another person that supported me looking into priesthood all along,” Father Clark said, and Msgr. Meagher is a “deep and prayerful priest” and he could not have asked for a better sponsoring pastor. Both priests offer examples of generosity and availability to the people, and “both have been very good to me,” he said.

Msgr. Meagher said he was humbled to have been part of Father Clark’s journey and affirmed that he will be prayerful, active, and “just a humble priest and a joyful priest.”

Bishop Lucia anointed Father Clark’s hands with Sacred Chrism and presented him with the gifts of bread and wine. He concluded the rite by offering the Sign of Peace to the diocese’s newest priest.

Father Clark then concelebrated his first Mass alongside Bishop Lucia, retired Bishop Robert J. Cunningham, and many other priests of the diocese — moments he counted as the most meaningful and memorable of the Mass.

Father Clark will celebrate his first Mass at his home parish tomorrow, Aug. 16, at 2 p.m., and the 10:30 a.m. Mass Aug. 23 at Holy Family. Father Clark’s first assignment will also be at the parish he has come to know as a home: effective Sept. 1, he will serve as parochial vicar of Holy Family.

The parish’s pastor, Father John Manno, said Father Clark has “a great rapport with the parishioners” — evidenced by the shout of joy heard from the pews when Bishop Lucia announced the assignment — “and we’re happy to have him back.”

“He’s got a big heart,” Father Manno said of Father Clark. “It’s obvious that he brings that to all the pastoral experiences…. That’s going to be his greatest benefit.”