‘An unlikely source of life’: Seminarian Malachi Clark reflects on the ‘crucible’ of cancer 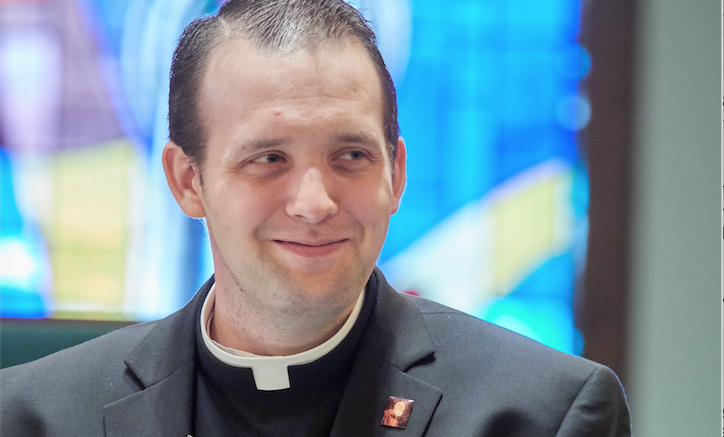 At just 25 years old, diocesan seminarian Malachi Clark received a staggering diagnosis no number of years could have prepared him for: cancer.

After four surgeries, 12 weeks of chemotherapy, and countless prayers, Clark is in recovery. He recently shared the story of his fight with the Sun and with dozens of parishioners and supporters during a candid talk July 11 at Holy Family Church in Syracuse.

Clark, now 26, is the youngest of Courtney and Mari Jo Clark’s eight children. He’s Uncle Malachi to 58 nieces and nephews — 60 by September. He’s the only member of his family following a call to the religious life.

He grew up attending the Parish of Saints John and Andrew in Binghamton and first considered the priesthood before kindergarten.

“I’d go to daily Mass and I saw what the priest did at the altar,” he recalled. “I thought, ‘Maybe that’s what I want to do with my life.’”

Those thoughts returned when he was a teenager. After being accepted for formation by the diocese, he spent three years at St. John’s University in Queens and two years at St. Mary’s Seminary and University in Baltimore. His pastoral year, which began last September with an assignment to Holy Family, is drawing to a close next month. Even in light of the illness that stole so much of his year, Clark says, “it’s been a beautiful journey.”

The first sign of that illness cropped up in August — pain in his stomach. Clark chalked it up to the strenuous work of changing the brakes in his car and let it slide. The pain dissipated after about two weeks. It returned around Halloween, but Clark again figured it was from the heavy lifting he had done to help a friend move.

On November 20 he was hurting badly enough — a hernia, he thought — to visit a walk-in health facility back home in Binghamton. The medical staff found his left testicle swollen and ordered an ultrasound the following day. A week later, Clark was told a mass had been found. On November 30, blood work confirmed cancer.

Those days were filled with a torrent of anxiety, fear, overwhelm. “It’s very hard to put into words what was going through my mind,” Clark said.

On December 1, Clark underwent his first surgery, a radical orchiectomy, to remove the testicle.

On December 6 he had a CAT scan that would reveal the cancer had metastasized to his left lung and lymph nodes.

In a period of many “worst moments,” Clark recalls that one in particular. “The worst moment before chemo was when I found out it metastasized. I almost cried in the elevator. That was tough,” he said.

His second surgery, to place a port in his chest for delivering chemotherapy treatment, was December 14. He had his first chemo session December 18.

Clark’s grueling, 12-week chemo regimen began in dramatic fashion. An anti-nausea drug was administered through his port — and suddenly Clark found himself unable to breathe. Thankfully, the severe allergic reaction was treated quickly and successfully.

The days were long and exhausting, Clark recalled, feeling longer and more exhausting as the treatment stretched on. He read a lot (George Wiegel’s biography of St. John Paul II, Bram Stoker’s Dracula, favorite sections from The Lord of the Rings and The Chronicles of Narnia, among a stack of other books) and watched a lot of television (Sherlock Holmes, Agatha Christie’s Poirot, documentaries, and The Great British Baking Show, thanks to a Netflix account gifted to him by Saints John and Andrew’s Msgr. Michael Meagher and Father Chris Seibt).

It became increasingly difficult to wake up in the mornings and most afternoons were spent sleeping. Clark lost 40 pounds and his hair — he ended up shaving his head and his face when he could no longer stand beard hair molting into his food. He gained a constant metallic taste in his mouth and a ringing in his ears. There were days Clark felt so horrible, he said, he thought he was going to die.

Nonetheless, Clark was at early morning Mass every single day during his treatment. On the Sundays when he felt well enough, he served Mass at his home parish; otherwise, he sat in the sanctuary in cassock and surplice. He prayed the Liturgy of the Hours, especially morning and evening prayer, every day. He regularly prayed the rosary, the Chaplet of Divine Mercy, the Litany of Loreto.

Clark also prayed to Blessed Solanus Casey, the Franciscan priest to whom he has a special devotion and whose beatification he had attended in Detroit just days before making that fateful trip to the walk-in center.

“You kind of pray differently when you’re sick,” Clark said. His prayer to Blessed Solanus was essentially one of intercession for a cure. But also, he said, “the more one thinks about what other people are going through, and you’re able to unite more, the less I’m going to be preoccupied with myself, so you’re not in self-pity. And God was with me the whole time.”

Christmas was quiet, spent with his parents — his weakened immune system meant the usual house full of family was not possible. He turned 26 on January 18 and “had a beautiful birthday present in the form of a visit from my spiritual father, Bishop Cunningham,” and Father John Manno, pastor of Holy Family. The celebration concluded with a nice dinner with his parents that evening.

God was with him and so too were his parents — heroes, Clark said, who cared for him throughout his illness — his siblings, the clergy and people of the diocese, his fellow seminarians, his friends and family. Clark knows he couldn’t have made it through those days without the prayers and support of so many.

In remission and refocused

At the end of his chemo treatments, tests showed no more cancer activity. On April 4, three days after Easter, Clark had surgery to remove the diseased portions of his lung. A biopsy showed no cancer activity. His blood work and scans so far have been good. Clark is currently in remission. He’s suffering some lingering effects from his treatment, but overall he’s feeling good.

Though his pastoral year turned out nothing at all like he envisioned, it was still a pastoral experience for Clark.

“It’s a crucible, all this and even the after,” he said. “It’s all a crucible where God’s purifying my heart to make a more priestly heart, like his, for others — the heart of a shepherd, a friend, a brother, a father.”

This experience has changed him and he’s still processing it all, Clark told the crowd at Holy Family. It’s put the things he worries about into perspective and refocused him on living “in the precious present moment.” Though he worries about a relapse and other what-ifs, he sees “more and more that I’m called to give myself to the Lord.” He’s set to return to his seminary studies at St. Mary’s at the end of August.

Clark entitled his talk at the church “An Unlikely Source of Life.” Father Manno, who served as interlocutor during the talk, asked him to explain that title.

“It’s an acknowledgement of the fact that in this awful, tough, and dare I say hellish place where one would only expect to find death, destruction, and despair, I instead found life through striving and trying to give my suffering to Jesus through Mary so that they will use this experience to be a crucible through which my priestly heart can begin to be formed more deeply so that I can be there as a sanctuary for Christ’s suffering people to find hope.”

Editor’s note: Malachi Clark’s Rite of Candidacy will be celebrated by Bishop Robert J. Cunningham July 29 during the 12:15 p.m. Mass at Holy Family Church in Syracuse. During the rite, Clark will be recognized as a worthy candidate for ordination to the priesthood. All are welcome to attend.

Clark will also offer another talk on his experience with cancer at his home parish, the Parish of Saints John and Andrew, 1263 Vestal Ave., Binghamton, on Aug. 9 at 6:30 p.m. All are welcome.