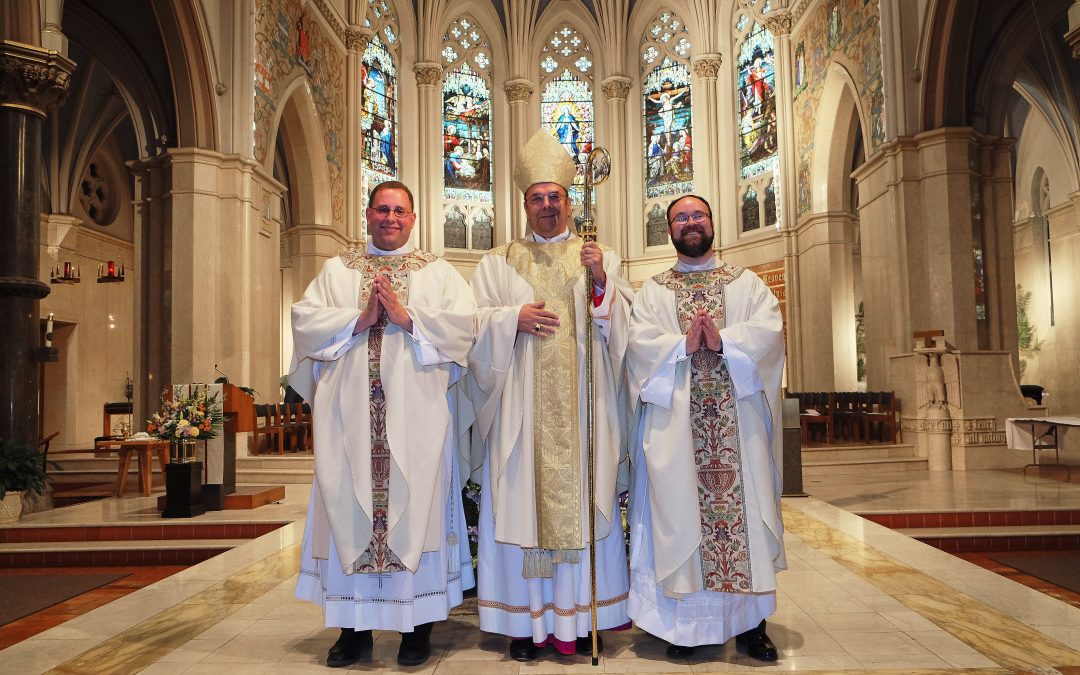 SYRACUSE — Long lines stretched down the side aisles of the Cathedral of the Immaculate Conception June 4 as the diocese’s two newest priests offered blessings to family members, friends, and supporters at the side altars.

Between blessings, Father Tassini offered praise to Jesus Christ and recalled his most memorable moment from the Mass. “The whole thing was particularly inspiring, but I was especially moved when all the priests were laying hands on me,” he said referring to the ritual during the rite where the bishop and priests place their hands on the ordinand’s head, a sign of fraternity that was important.

Father Kirkman declared himself “speechless” and cited another’s words as his most memorable moment: “A couple of times with the bishop — just some of the things he said were really powerful,” he said with a smile.

During the Mass, Bishop Cunningham offered a homily that spoke of and to the ordinands.

“Today we are being given a great sign of God’s care for us, His Church,” he said. “In a few moments, our two deacons will receive the grace of the holy priesthood by the laying on of my hands and the power of the Holy Spirit. This is not just some career move, or even the fulfillment of a long and pious dream. No, it is a sign from God that the Body of Christ should go on in and among us, that the Lord continues to desire to feed His people with His own Flesh and Blood, and that He has chosen Peter and Kenneth to be His consecrated instruments for that purpose.”

Bishop Cunningham reminded the two men that the gift they have received is to be exercised with humility and gentleness. He directed them be true ministers of the Gospel, to center their priestly lives on the mystery of Christ celebrated in the Eucharist, to guide the faithful on the path of salvation, and to be good shepherds.

“Finally,” he said, “remain open to the action of Christ in your life. Let the power of the Lord take root in you. Trust in the love and mercy which He has manifested in calling you to share His priestly mission.”

Following the homily, the ordinands declared themselves willing to be ordained and offered their promise of obedience to the bishop and his successors. They then prostrated themselves in the sanctuary, a sign of their submission to God’s will, as all gathered prayed the Litany of the Saints.

At the Laying on of Hands, Bishop Cunningham placed his hands on each ordinand’s head in silent prayer, a gesture repeated by all of the priests present in the sanctuary. The bishop then offered the Prayer of Ordination.

Fathers Kirkman and Tassini were then vested in the stole and chasuble of a priest.

Father Kirkman was assisted by Msgr. J. Robert Yeazel, pastor of his home parish of Holy Cross in DeWitt, and Father John Ahern, who also served at Holy Cross. Father Kirkman had turned to Msgr. Yeazel early in his discernment to discuss his vocation.

“When he [Father Kirkman] was young and discerning,” Msgr. Yeazel recalled after the Mass,  “he was vibrant, [had] a great mind, he was inquisitive about everything, he wanted to know what priesthood was all about, and especially what it did to your life and how the Lord really moved in your life. He just took it up from there and the Lord took over.”

The experience of vesting him as a priest “was marvelous,” Msgr. Yeazel said. “It was like launching a grandchild out into the world. It was wonderful.”

Father Tassini was assisted by Father John Manno, the former pastor of his home parish, St. James in Syracuse, and Father Dan Muscalino, who helped him in his early discernment while a student at Bishop Ludden Jr./Sr. High School.

Father Muscalino told the Sun in an interview after ordination weekend that he surely gave his young student the counsel he has given many discerners over the years: pray, trust that God has a plan, and that he himself loves being a priest.

He said vesting Father Tassini and serving as a principal concelebrant at his first Mass “was an incredible experience,” something akin to a parent seeing a child move into the next step of their life.

Father Muscalino said that Fathers Tassini and Kirkman “and their generation know that the Church by definition is going to be different than even they experienced when they were growing up. I believe that their training has given them the tools to acknowledge that and to work with that.” Admitting a bit of bias, Father Muscalino said of Father Tassini, “I think he’s going to be a great priest.”

Bishop Cunningham anointed the new priests’ hands with Sacred Chrism and presented them with the gifts of bread and wine. He then concluded the rite by offering them the Sign of Peace, with all their brother priests doing the same.

After Father Kirkman and Father Tassini had assisted him in their first celebration of the Eucharist as priests, Bishop Cunningham announced their first priestly assignments: Father Kirkman will serve as parochial vicar to St. Mary’s Parish in Cortland together with the merged parish worship site at St. Anthony of Padua; Father Tassini will serve as parochial vicar at St. Matthew’s Parish in East Syracuse, which is linked to St. Mary’s in Minoa and St. Francis of Assisi in Bridgeport. Their assignments will begin July 1.

Before Mass ended, Bishop Cunningham offered words of thanks to the families, priests, teachers, and other supporters in the new priests’ lives — and to Father Kirkman and Father Tassini themselves, for giving their lives in service to the Church.

All photos for the Catholic Sun by Chuck Wainwright.

Father Peter Tassini and Father Kenneth Kirkman prostrate themselves as those gathered pray the Litany of the Saints. (Sun photo | Chuck Wainwright)