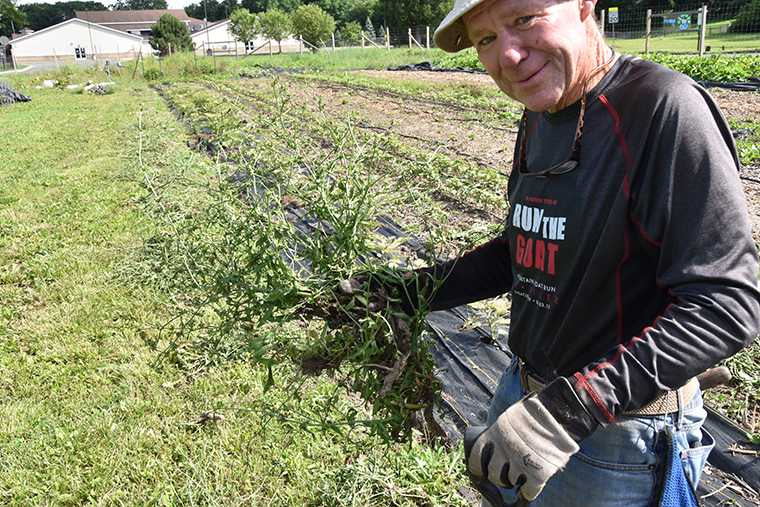 Some coddled crops grow with an apron of weed-smothering tarp; other sprouts benefit from relentless weed-ripper Charlie Reller.

One recent 84-degree afternoon, Reller, with his wide-brim hat and kneepads, worked his way among the potatoes, tomatoes, corn, beans, lettuce, and squash, leaving 40-yard rows of annihilated chicory, a rather thick-rooted weed that takes some digging.

“I enjoy being here, I enjoy helping out, I enjoy watching things grow and the mission that we serve here,” he said at Brady Farm (bradyfarm.org), flourishing for five years now on the former grounds of a 14-acre apartment complex in the Valley section of Syracuse. Part of the nearby Brady Faith Center, the farm provides “food justice, food availability, and employment” in what is basically a food desert, Reller said. All proceeds from sales go back into the farm.

Reller, semiretired after selling his insurance agency a couple of years ago, provides an equal measure of financial and labor support to the farm mission.  “It can be … somewhat soothing to come out and just pull some weeds,” he said.

He was actually putting in a plug for volunteers, which the farm has been short of since the coronavirus pandemic hit earlier this year. More staffers are needed too. Furthermore, the discovery of concrete in the ground from the former apartment complex has delayed installation of a third high tunnel (greenhouse) in which the farm hopes to grow popular crops such as tomatoes and peppers.

“We’re doing fine. … We are definitely not toasted,” said Farm Coordinator Jessi Lyons. “We had setbacks but we’re adapting.” 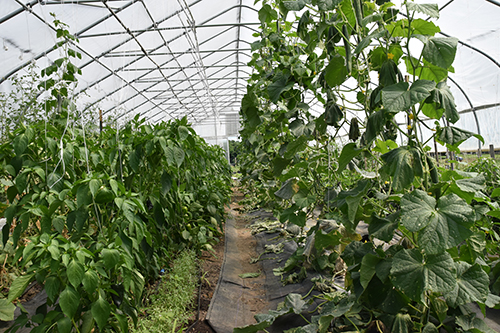 Crops such as cucumbers, hot peppers, and tomatoes grow in this high tunnel (greenhouse) at the farm. The tall plants are held up by spools of strings. “If they didn’t have that support they’d just kind of vine out,” says Farm Manager Alice Gallagher. Tomato varieties include cherry tomatoes; “perfect circular slicers”; and ones that are “kind of mildly heart-shaped and so delicious,” Gallagher says. And the farm’s okra “will forever be popular,” she says.

The very hot and very dry spring did a number on some of the more popular crops but she planned to plant more spinach, lettuces, radishes, and greens. And Brady Farm had planned to sell to restaurants this year. The pandemic knocked down that plan, but the farm nearly tripled its subscriptions (to about 140) to Community Supported Agriculture (CSA), whereby subscribers pay for regular boxes of food.

Also, a grant of more than $80,000 from the Mother Cabrini Foundation allowed the farm to sell crops 2-6 p.m. Thursdays at Café Sankofa Cooperative at 2323 S. Salina St. in Syracuse. Because of the big demand for subscriptions, the farm is not selling at Syracuse’s Regional Market right now. But customers can buy produce 9 a.m.-1 p.m. Saturdays at the farm at 150 Ford Ave.

The Cabrini grant also funded a  delivery van that allowed the farm to deliver a lot of emergency food to families during the pandemic lockdown. A further benefit of the grant is a new resale program: Brady Farm buys wholesale items like strawberries, blueberries, peaches, and sweet corn from other farms and then includes those items in CSA boxes; it is the kind of produce that people might otherwise buy from a grocery store.

Another plus has been the Wellness Ambassador Program, which offered online cooking instruction: Participants logged on at their separate locations and cooked a meal together. “That’s been really fun, and it was a great way to reach people” during the lockdown, Lyons said. In July, the farm was able to resume having small groups back, with social distancing, for tours and education.

As master weeder Reller labored with his shovel, bees browsed their favorites, little white cabbage moths flitted close to the ground, and a big dragonfly hovered in silhouette against the sky.

“There are times when I sit later in the afternoon and just unwind before I head home even,” Reller said, “and this can be just a very peaceful place.” 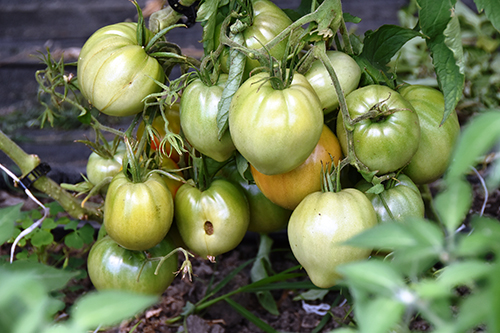 This cluster of tomatoes in the greenhouse is so heavy that it hangs close to the ground. “We want to be feeding people produce throughout the year,” says Farm Manager Alice Gallagher. “I don’t know any farm that hasn’t had an increased demand,” says Farm
Coordinator Jessi Lyons. “It’s just been a matter of keeping up with the demand.”

Growing nearby him was one of Farm Manager Alice Gallagher’s favorites: “Yeah, popcorn!” she said. “Popcorn that we can have all winter. Yeah, we’ll put it in winter CSA boxes, and some tomatoes and squash.”

The popcorn, she said, “tastes so nutty and delicious.”

She added: “Okra will forever be popular, and it’s really starting to boom. … We probably harvest it at least every day.”

Other things that were coming on, she said, were “tomatoes and cherry tomatoes; the peppers are starting to color up. The hot peppers have been amazingly productive inside of the tunnel. Cucumbers we’ve had probably for the last two months at least but they’re still coming on. We’ve been picking green beans; they picked some carrots this week [in late July], lettuce, herbs of all kinds — basils and dill. … Onions, of course! We have so many onions and garlic.”

She expected to pick storage onions depending on how dry the weather stayed, and she noted the “delicious shallots — they’re so big in the back. … I cooked with one.”

The farm’s flowers, she said, “are finally popping. Yah, that’s always nice.” Flowers include a row of sunflowers; some amaranths (“they’re really pretty, they kind of look like clover); cosmos; gladioluses; and sweet Annie (“you can dry that, and it smells so nice”).

“But really,” she said, “zinnias are the star of the show, and then greenery to fill it in.”

Late August and September are the peak time at Brady Farm, which is already harvesting something every day.

“If you want to focus on something separate from unfortunately a lot of what we do have to focus on these days,” financial backer and volunteer worker Reller said, “this is one way to do it.”

Grateful for his assistance, Farm Manager Gallagher told him, “We should get stuff out of the tunnel before you go; really, there are good peppers and I bet there’s some red tomatoes in there, if not cherry tomatoes.”

All-around farm hero Reller said that’s another reason why he drops by to help:

“I do go home with a fresh salad each evening for dinner.”