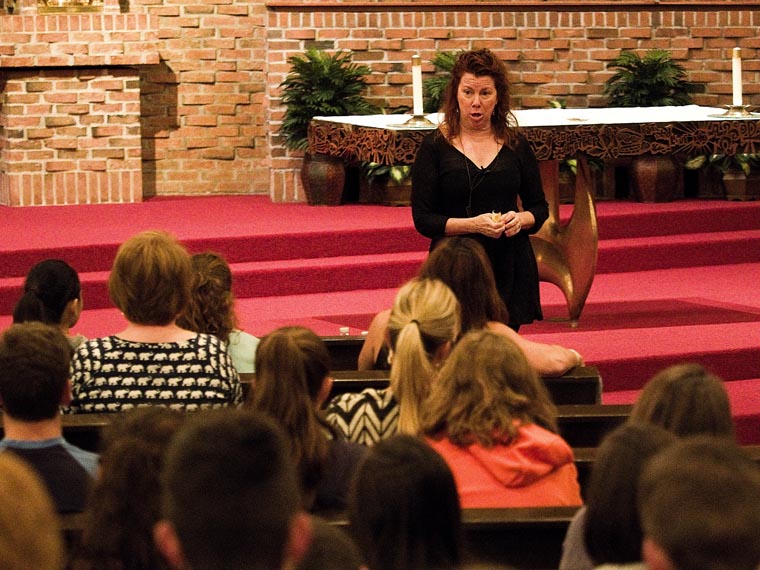 She implores students in Cazenovia to live prayerful lives

When the “dirtybirds” show up, Siobhan Fallon Hogan has got to fly.

The character actress who was born in Syracuse and raised in Cazenovia spoke to about 280 faith-formation students Oct. 12 at St. James Church in Cazenovia. The Catholic actress warned the children about people whom her mother always described as “dirtybirds.”

Those, she explained, are people who use dirty language, watch dirty shows or movies, or try to commit dirty acts.

She told the students: “No more dirty talk. … You’ve got to make rules in your life.”

“Dirtybirds,” Siobhan Fallon Hogan said, also write some scripts for TV shows and movies. She said she has turned down roles or even left in mid-show because the script took an objectionable turn.

“I was on a TV series and I quit in the middle of it,” she said, “because they wanted me to start having an affair that began at church at Mass. And I said, ‘I can’t do this because I have kids’; my daughter at the time was, like, 13. And I said, ‘I can’t teach one thing and do another.’”

Asked how much she threw away by quitting, she said, “A pretty penny. Ha-ha-ha-ha-ha-ha. My Catholic faith has not made me rich. You make these choices and it doesn’t help the bank account.”

But she does it anyway.

“Yeah,” she said, “because you gotta look yourself in the mirror at the end of the day.”

She recalled that even though she was quitting the role, she still had to finish a scene. The makeup artist, not wanting to be obvious, wrote words of support across Fallon Hogan’s forehead. Re-creating that moment, Fallon Hogan made believe she was writing on fifth-grader Abby Lansing’s forehead.

“It was weird!” Abby said after the program.

Fallon Hogan’s acting roles certainly border on the oddball variety. A search on YouTube revealed a hilarious half-hour of scenes in movies and TV shows. In Men in Black, her character apparently doesn’t know whether to laugh or cry, so she does both at the same time.

These are among her other roles: a strangely preoccupied interviewer of a job applicant; a skeptical secretary; a jaw-thrusting roommate of Elaine on Seinfeld; a hostage handcuffed to a filing cabinet while Samuel L. Jackson points a gun in The Negotiator; basically a female Elmer Fudd as a birthing teacher in Baby Mama; and a cigarette-smoking bus driver in Forrest Gump. She and Gump hit it off immediately. Neither was inclined to laugh.

This goes back to her time at Le Moyne College. “I was given the choice by a great professor and director, Dr. John Cooke, of taking the role of the ingénue, or Mrs. Drudge, the maid,” she wrote in an email after racing back to New Jersey after her appearance at St. James.  “I would rather limp or lisp than be the pretty straight woman.”

The approach worked. After graduating from Le Moyne, she earned a master’s degree in fine arts from the Catholic University of America. She appeared on Saturday Night Live in 1991 and 1992, and she has followed that with many credits on TV and in movies.

She recently finished her second season on Fox’s Wayward Pines. “It’s about this weird town that you can’t get out of,” she said. “It’s kind of like Twin Peaks. I am the secretary that’s a loser, and I just use my own life.” She laughed when she said that, a wheezy out-of-breath laugh that was one of her many sound effects.

While imploring the faith-formation students to live decent, principle-filled lives, she employed these voices: screeching parent, fussy director, offended squawker, bleating walrus, nasally Brooklyn waitress, and amateurish actress in cheesy carpet commercial. At other times she wailed and hummed like a confused steam engine and broadcast orders like a director with a bullhorn.

From the stares of the middle-schoolers in the audience, it was unclear if they were fascinated or just stunned by the onslaught of words.

Asked if talking fast is part of her act, she said, “No, that’s just me. … I was one of five, so you had to talk fast to be able to get a word in.” Those last few words were speedy, as if she were jolted yet again into the days of a voluble household.

The new generation, she told the middle-schoolers, includes them.

She added: “Christ has got to be up there. … He’s with you all the time. So is the Spirit. So if you can say, ‘In my life, I am going to make all my judgments as if Jesus Christ were right next to me,’ would you want Jesus Christ to think that you were a dirtybird?”

Regarding dating, she told the children: “When you say no — you’re a girl, to a guy — they like you more and keep calling you up.”

On the subject of praying, Fallon Hogan told the middle-schoolers that she always tells her three children: “You’ve got to pray in the morning. Because, if you want to be best friends with someone, what do you have to do? Talk to them all the time, right? So, maybe in between classes, you’re like, ‘You know, I’m just going to say a little prayer. …

She also instructed her audience to check in with the Blessed Mother every day.

St. James Pastor Father Kevin Corcoran said he is impressed that Fallon Hogan stays true to herself in her professional life.

“I thought it kind of inspired me to stick with the Church,” said Cazenovia High School ninth-grader Michael Parrella, “going out there and doing stuff, and maybe going on more church trips. … She was really funny. She really has a good message.”

His classmate Evan Murray agreed. “I thought it was going to be a lot more about her career and how she shaped her life, instead of how we’re supposed to shape ours,” said Evan. An altar server at St. James, he said he believes that Father Kevin appreciates his service.

Lisa Matto, faith-formation director for St. James, said: “I think that the kids are going to take and keep in their hearts what she told them today, that they’re building a foundation, the power of the word ‘no,’ and to keep Christ and the Blessed Mother with them.”

Before she headed back to New Jersey, Fallon Hogan noted that she appears in a new movie, Going in Style, starring Morgan Freeman, Michael Caine, Alan Arkin, Matt Dillon, and Ann-Margret. The film comes out at Eastertime.

For the wedding scene, Fallon Hogan was asked, “Do you want to dance with Michael Caine or Morgan Freeman?”

In her best high-pitched ecstatic-actress voice, she answered: