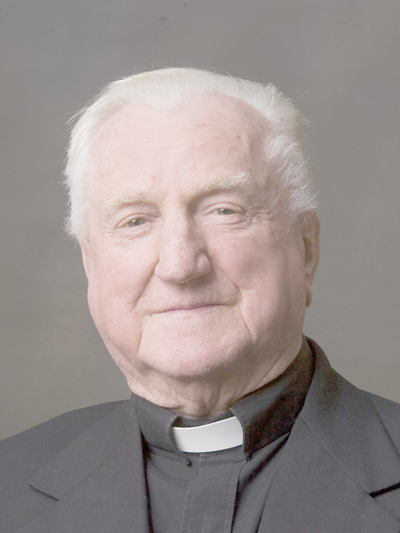 UTICA — After a life of extraordinary faith, loss, love and devotion, Msgr. Casmir Krzysiak died on March 30 at St. Elizabeth’s Medical Center. He was 88.

Msgr. Krzysiak was born in Chicago on May 18, 1921 to John and Helen Krzysiak. At only 10 years old, his life took an early turn with the unexpected death of his mother. His father moved his young family back to Poland in 1933, where Msgr. Krzysiak attended high school.

During World War II, Msgr. Krzysiak was a freedom fighter with the Polish Army.

Father John Mikalajunas, pastor of Holy Trinity Church in Utica, delivered the homily at Msgr. Krzysiak’s funeral, and he told of how, as a young man, Msgr. Kryzsiak hid himself in the woods to keep from being discovered by Nazi soldiers.

“Imagine what this young man must have felt nearing life and death,” Father Mikalajunas said.

One of the armed soldiers walked nearer to Father Kryzsiak as he hid beneath a pile of branches and leaves. “Then another soldier called, he left, and his life was spared,“ Father Mikalajunas said.

Msgr. Krzysiak went on to devote this life to the priesthood, and in 1945, immediately after the war, he entered the seminary in Krakow.

It was in this seminary where Msgr. Krzysiak’s life would take another surprising turn.

Father Mikalajunas drew a number of connections between Msgr. Krzysiak and the pope. “I could see, you know, this beautiful man, John Paul II, in him. Both taught us how to live, how to laugh, how to have fun,” Father Mikalajunas said.

In 1949, Msgr. Krzysiak returned to America to complete his studies for the priesthood at Ss. Cyril and Methodius Seminary in Orchard Lake, Mi.

He was ordained by Bishop Walter Foery at the Cathedral of the Immaculate Conception on June 3, 1950.

Father Mikalajunas said that while Msgr. Krzysiak loved each of the parishes he served, he held a special fondness for the people of St. Stanislaus Church in Utica.

“To the good people of this church, this pastor loved you, he loved you so much,” Father Mikalajunas said. “He gave his life for you, he stood at that altar as a witness to the Gospel, to the Christ that he believed in, the Christ that was his life.”

When Bishop Moynihan had the opportunity to meet with Pope John Paul II, he mentioned Msgr. Krzysiak to the pope, who showed he remembered the priest by correcting the bishop’s pronunciation of his name. (Msgr. Krzysiak’s name is pronounced Shi-shock.) Father Mikalajunas reminded those gathered that Pope John Paul II also personally signed a papal blessing for the 75th anniversary of St. Stanislaus Church.

While he dedicated his life to serving parishes in the Syracuse diocese, Msgr. Krzysiak remained fiercely proud of his Polish heritage.

This pride was evident in the funeral Mass which was celebrated by Bishop Robert J. Cunningham at Holy Trinity Church on April 8. Over 400 people were in attendance, and most knew all the words to the beautiful Polish hymns that were sung throughout the Mass. Some of the readings were in Polish as well.

Father Mikalajunas said Msgr. Krzysiak insisted that his funeral Mass celebrate the Polish tradition he held so dear. “He said ‘I want every hymn in my Mass in Polish.’ ‘Yes, Cas, it’ll be.’ I wouldn’t dare alter those plans because someday we’ll meet in heaven and I’ll get holy hell,” Father Mikalajunas said.

He said he was humbled when Msgr. Krzysiak asked him to hear his confession at the nursing home, the man from whom he learned how to be a priest.

“Cas was a very good teacher, and today I can say I thank God for him,” Father Mikalajunas said, “I’m a better priest because of the Chicago boy who went to Poland and came to the Diocese of Syracuse.”