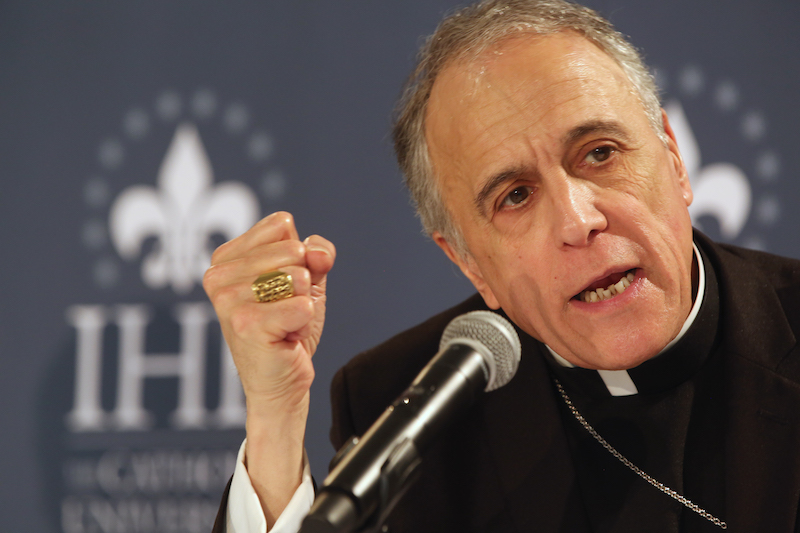 Cardinal Daniel N. DiNardo of Galveston-Houston, president of the U.S. Conference of Catholic Bishops, responds to a question during a conference on “Healing the Breach of Trust: The Role of the Laity in Responding to the Crisis” Feb. 6, 2019, at The Catholic University of America in Washington. (CNS photo | Bob Roller)

WASHINGTON (CNS) — The laity may be angry over the most recent revelations of the Catholic Church’s sex abuse crisis, but bishops, particularly younger ones, share in that anger and “want to move with real force” toward solutions and it could yield a new season for the church, said the president of the U.S. Conference of Catholic Bishops Feb. 6.

Cardinal Daniel N. Dinardo, who is the archbishop of Galveston-Houston, made the comments during a daylong conference to address the problem.

The “Healing the Breach of Trust” conference, the second such meeting at The Catholic University of America in Washington, addressed the need of more involvement by lay women and men — one inspired by the teachings of the Second Vatican Council — in building what the cardinal called in the morning part of the conference a new “season” for the church, and one that may not be accidental.

“Think about what the Spirit might be doing in all of this,” Cardinal DiNardo said. “In saying this, I am in no way trying to deny or dodge the issues of the episcopal responsibility and accountability that this crisis has raised,” but added it’s worth it to ponder St. Augustine’s principle “that God can bring good even out of evil.”

He said he believed that the current revelations — and the crisis they have caused — are being used by the Holy Spirit to open the church “to a fuller understanding of ecclesiology that began over a half century ago,” referring to the Second Vatican Council, convened in Rome from 1962 to 1965, which called for a renewal of the church, one that involved the people in the pews and a less hierarchical church.

“What I think is happening is one of those solidifying moments when the insights of a council begin to gel more fully into reality,” he said.

While some bishops want to forge ahead quickly in addressing the crisis, the pope has asked for discernment before any action is taken, he said, and other bishops have urged “prudence” since so many have been hurt by abuse at the hands of clergy.

“Some want a little more action,” he said. “But I think there isn’t that much disunity.”

Bishops are committed to finding a solution, he said, but there are issues that have caused a great loss of trust. One is that a previous crisis took place before and the other deals with circumstances of who knew what and when about former U.S. Cardinal Theodore E. McCarrick, the retired archbishop of Washington, who resigned from the College of Cardinals last year following accusations that he had sexually abused a minor decades ago and may have had improper relationships with seminarians.

Archbishop McCarrick is living in a friary in rural Kansas while Vatican officials investigate the accusations to decide whether the 88-year-old archbishop will return to the lay state.

Catholic University’s president, John Garvey, joined Cardinal DiNardo in the conference’s morning session, and said that the current crisis in the church, even though it faced a similar moment in 2002, now also focuses on the past behavior of the bishops themselves as well as on their management of abuse cases and accusations. Some of the factors at hand involve the bishops’ isolation from others and the lack of people surrounding them who do not want to offer criticism or advise because of the prelates’ hierarchical status.

But there are plenty outside of their circle manifesting the anger they feel. Cardinal DiNardo said he has received thousands of letters expressing that anger and he has read about 65 percent of them. There also are plenty of those who propose that solutions to the crisis involve returning to the Latin Mass or ordaining women. But a new season for the church, as it pertains to the bishops, means acting less as an administrator and more as a pastor, he said. In the new “season,” bishops will have to undergo a pastoral conversion.

“This will mean that bishops will have to let go — not of their authority, for that is instituted by Christ — but bishops will have to learn new ways to share and delegate their administrative duties,” he said, adding that it could be one where “shepherds recognize more fully the charisms of the laity and encourage the exercise of those gifts for the good of the church.”

Garvey said addressing the crisis is of great importance and bishops should think about those in pews who are “gradually falling away.”

“We need to understand people’s love for the church is greatly affected,” he said. “We better fix it or we’re going to lose the next generation of Catholics.”

Cardinal DiNardo said there is a resolve “to see this through,” even though when the U.S. bishops met as a group in November, “we were pretty down,” but now there’s more hope to move forward, he said.