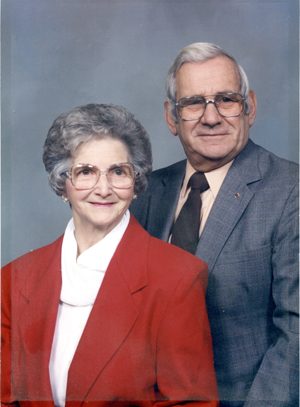 Herman and Rose (Zingaro) Fedrizzi of Jordan, celebrated their 60th wedding anniversary on Oct. 8, 2009. They were married at St. Cecilia’s Church by Father Denti in Solvay.

Their marriage has been blessed with four children and their spouses: Cathy and John Meixner, Susan and Michael Speach, Robert and Kathy Fedrizzi, and Christopher Fedrizzi. They have seven grandchildren – Michael, Melissa and Connie Speach, David Meixner, Kyle Fedrizzi, Gabriella and Tyler Fedrizzi.

Herm and Rose are communicates of St. Pat’s Church in Jordan. Herm is an active member of the Msgr. Meaney Knights of Columbus, an usher at St. Pat’s Church, and volunteers for the Jordan-Elbridge School District’s sports and reading programs. Rose is active with the St. Patrick’s Altar and Rosary Society and the Jordan Ladies Study Club. Also, they both can be found volunteering at the Jordan Fall Festival or making candy at the Speach Family Candy Shoppe. Their real love is being involved with their grandchildren’s activities.

A family celebration was held on Oct. 11, 2009 at their daughter Susan’s home. We wish them a very happy 60th anniversary!