Holy Year is a reminder to put mercy before judgment, pope says 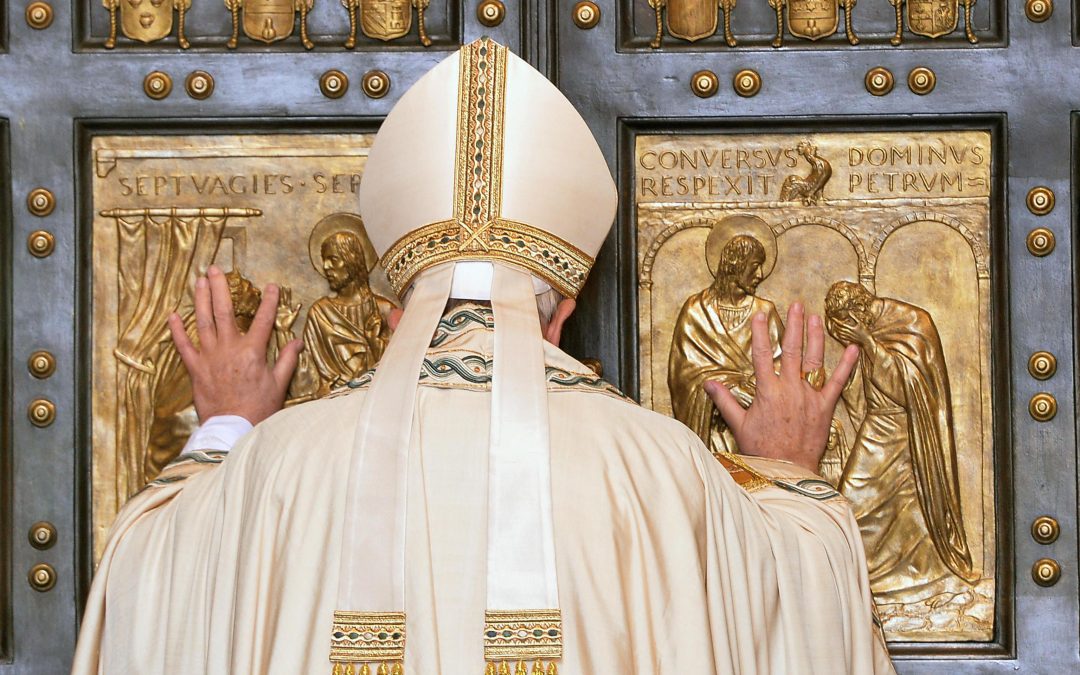 VATICAN CITY (CNS) — On a cloudy, damp morning, Pope Francis’ voice echoed in the atrium of St. Peter’s Basilica: “Open the gates of justice.” With five strong thrusts, the pope pushed open the Holy Door, a symbol of God’s justice, which he said will always be exercised “in the light of his mercy.”

The rite of the opening of the Holy Door was preceded by a Mass with 70,000 pilgrims packed in St. Peter’s Square Dec. 8, the feast of the Immaculate Conception and the beginning of the extraordinary Holy Year of Mercy.

As the sun broke through the clouds, heralding the start of the jubilee year, the pope bowed his head and remained still for several minutes in silent prayer.

Amid a crowd of dignitaries and pilgrims, a familiar face was also present at the historic event: retired Pope Benedict XVI, who followed Pope Francis through the Holy Door into St. Peter’s Basilica.

During his homily, Pope Francis emphasized the “simple, yet highly symbolic” act of opening the Holy Door, which “highlights the primacy of grace;” the same grace that made Mary “worthy of becoming the mother of Christ.”

“The fullness of grace can transform the human heart and enable it to do something so great as to change the course of human history,” he said.

The feast of the Immaculate Conception, he continued, serves as a reminder of the grandeur of God’s love in allowing Mary to “avert the original sin present in every man and woman who comes into this world.”

“This is the love of God which precedes, anticipates and saves,” he said. “Were sin the only thing that mattered, we would be the most desperate of creatures. But the promised triumph of Christ’s love enfolds everything in the Father’s mercy.”

The Year of Mercy, the pope stressed, is a gift of grace that allows Christians to experience the joy of encountering the transforming power of grace and rediscovering God’s infinite mercy toward sinners.

“How much wrong we do to God and his grace when we speak of sins being punished by his judgment before we speak of their being forgiven by his mercy,” he said.

“We have to put mercy before judgment, and in any event God’s judgment will always be in the light of his mercy. In passing through the Holy Door, then, may we feel that we ourselves are part of this mystery of love.”

Fifty years ago, he said, the church celebrated the “opening of another door,” with the Second Vatican Council urging the church to come out from self-enclosure and “set out once again with enthusiasm on her missionary journey.” The council closed Dec. 8, 1965.

Pope Francis, the first pope to be ordained to the priesthood after the council, said the council documents “testify to a great advance in faith,” but the council’s importance lies particularly in calling the Catholic Church to return to the spirit of the early Christians by undertaking “a journey of encountering people where they live: in their cities and homes, in their workplaces. Wherever there are people, the church is called to reach out to them and to bring the joy of the Gospel. After these decades, we again take up this missionary drive with the same power and enthusiasm.”

Shortly after the Mass, as thousands of people waited in St. Peter’s Square for a chance to walk through the Holy Door, Pope Francis led the midday Angelus prayer.

The feast of the Immaculate Conception has a special connection to the start of the Year of Mercy, he said, because “it reminds us that everything in our lives is a gift, everything is mercy.”

Like Mary, the pope continued, Christians are called to “become bearers of Christ” and to “let ourselves be embraced by the mercy of God who waits for us and forgives everything. Nothing is sweeter than his mercy. Let us allow ourselves to be caressed by God. The Lord is so good and he forgives everything.”

Pope Francis holds the Book of the Gospels as he celebrates the opening Mass of the Holy Year of Mercy in St. Peter’s Square at the Vatican Dec. 8. (CNS photo | Paul Haring)

A woman kisses the Holy Door in St. Peter’s Basilica after Pope Francis opened it to mark the inauguration of the Jubilee Year of Mercy at the Vatican Dec. 8. (CNS photo | Max Rossi, Reuters)