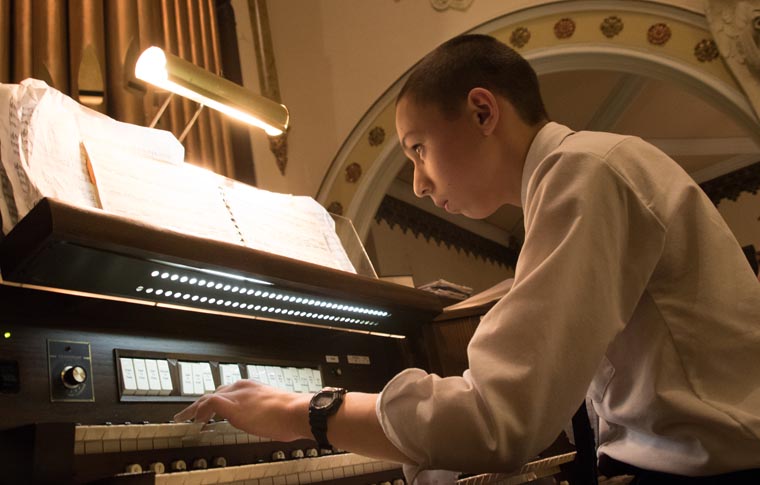 When 12-year-old Dominic Fiacco reaches down to tighten his shoelaces, it is almost time, as his grandfather might say, to blast the people out of their chairs.

On a recent Monday evening, the startling young musician, wearing a tie and holding a fedora because his family always gets dressed up for church, materialized in the choir loft and hovered by the organ before an instrumental and choral concert at St. Joseph-St. Patrick Church in Utica. Dominic exuded humility, but those shoes were ready to bounce and glide on the pedal board while his fingers ruled the three manuals (keyboards) in a triumphant performance of the music of Brahms, Handel, and Bach.

Asked if his shoes would ever come flying off during a performance, he said:

“Well, they probably wouldn’t come off, but the shoelaces could come untied. That hasn’t happened yet.” If it ever does, the adoring choir will be ready to assist. After Dominic finished the final piece of the night, tenor Samuel Dickson gave him a high five.

“He’s a well-kept secret,” his grandfather Joe Fiacco said, but, oh, how that is changing. Already, Dominic is known as the assistant organist who plays for as many as three Masses on weekends at St. Joseph-St. Patrick, where the chiseled depictions of saints come right out of the walls as if drawn to the music. Next year, Dominic will be the youngest organist to perform at Manhattan’s famed Cathedral Church of Saint John the Divine since the renovation of the Great Organ in 2008.

The Monday evening program in Utica included the song O Magnum Mysterium: O Great Mystery. An earthly mystery is Dominic’s talent. Some family members and relatives play instruments or have an interest in music, but he has, in the words of his organ teacher, Stephen Best, “unlimited potential.”

He added: “I know zero about music. My wife taught herself how to play the guitar and sing, but to have the ability to do what he does isn’t natural.”

Dominic is working toward perfection. He gave himself a nine out of 10 overall for the four selections that he played in the concert: Ravel’s piano piece Sonatine: III. Anime and three organ pieces — Brahms’ How Lovely Is Thy Dwelling Place, Handel’s Hallelujah Chorus, and Bach’s Toccata in F Major. Rating their difficulty, he gave the Ravel, with its alternating moments of intensity and softness, “maybe eight”; the Brahms and the Handel, “five”; and the lively and majestic last piece, Bach’s Toccata, “nine or 10.” From the bows Dominic had to take at the end, the audience was siding with the “10.”

He feels a little uncomfortable bowing; he plays for the glory of the music. His polite personality contrasts with the thunderous organ sounds that he produces. He likes to keep his music “smooth and connected,” and there is no bombast in his thoughtful replies to questions.

“Well,” he said, “bombastic people aren’t really good at the organ because you need to sit down and learn all the hard notes, get them into your muscle memory; and I don’t think bombastic people like to do that.”

His grandfather figures that Dominic gets his politeness from his parents, Pamela and William. Their children, five boys and one girl, range in age from almost two to 12. The family lives in the Village of Poland northeast of Utica.

Dominic had asked his mom if she would turn the pages of the sheet music for him at the church concert. Pamela said, “It was just so funny when he approached me: ‘Mommy, can you do it? Ok, let’s practice first, OK?’ … And then when we get ready: ‘I’ll get you a chair.’”

“He is a sweet child. … He is the eldest,” Pamela said. “He always takes care of me, takes care of the whole family, the children. … He loves to read. … He loves to play with his younger siblings.” Dominic figures that coins are his “most normal hobby that you would generally publish in a newspaper,” but he also likes trains.

The four oldest children in the family are homeschooled “in the classical tradition,” William said in an email.

The Fiaccos own an electric organ and a piano. “Respecting Dominic’s proficiency at the organ,” William said, “I ascribe it to hard work superadded to the gift of God. … I am proud that he plays with passion. May he never cease to play with passion.”

He added that the playing of musical instruments is not like a rigorous course in mathematical proof. “It does not concern the speculative intellect … but the perfection of muscular movements and coordination, the development of the sense of rhythm and harmony. …

“At the present, Dominic practices three hours per day. I never have to tell him to practice, and only very rarely do I have to intervene and remind him of something his teachers have said.”

But then Dominic lost the accompaniment. Regardless, he still played half of it by memory when he showed up for the first rehearsal for the recent church concert.

“So that’s very uncanny; that’s nothing that you can work toward accomplishing as a normal person, a normal organist,” Siuta said. He added: “If I had any doubt, that was confirmation that there was something more going on here. It’s a gift. I know he hones his gift — he practices and practices.”

The tyke who taught

Dominic’s diligence goes way back. At four years old, he memorized all the states in the union. At the same age, he started playing musical instruments. “So I went up to the house one night to listen to him; I’d never seen anybody playing the cello,” Joe said. “He’s four years old. He’s explaining to me the difference between the notes for a piano and the cello.”

Before he was nine or 10, Dominic started playing the organ. His organ teacher, Best, had given him a piece to learn. “I played it for him and he was impressed,” Dominic recalled. “Then it’s been almost nonstop ever since.”

His grandfather remembers taking Dominic to a lesson at Utica’s First Presbyterian Church, which has a big pipe organ.

“I’m sitting there reading a couple of my daily reading books, half asleep,” Joe said, “and he hit this organ — I almost came right out of that chair. … And I told him, I said, ‘Whenever you play this piece … you have to play it last; nobody’ll sit down, nobody will sit down.’”

About 150 people were standing — more than once — at the concert at St. Joseph-St. Patrick. The other performers were Siuta, who also sang bass; flutists Beth Evans and Julie Miller, also an alto singer; altos Jennifer Barnard (soloist) and Harris-Lockwood; bass singer John Lara, who was also the trumpeter; sopranos Nancy Aiello, Teresa Bierman, Rebecca McCauley (soloist), Christine Robinson, and Margaret Tallman (soloist), who also directed the choir; and tenor Dickson.

‘Bring your own feeling’

It was a special choir for this performance, and mobile maestro Siuta gamely rounded up singers and musicians from Utica, Whitesboro, and Oriskany and arrived 10 minutes before the performance. With no tremolo of spirit, Siuta animatedly hit that organ and played pieces including Buxtehude’s stately Ciacona in E Minor, with its soaring and rumbling tones.

Dominic has allowed the choir to expand its repertoire, Siuta said, “because in addition to playing solo stuff he’s becoming an excellent choral accompanist.”

The measure of organists, Dominic said, is not only speed, but also “how well they interpret the music. How they bring life to it.”

He explained: “It begins with not playing notes very strictly, like da-da-da-da-da; you might put the emphasis on the first note, then delay the second note. So: Da-a-a, da-da-da. And then, you just need to bring your own feeling into the music.”

His organ teacher’s email about Dominic was packed with feeling. Best, the minister of music at First Presbyterian Church and lecturer in music at Hamilton College, called Dominic “a terrific young person from a wonderfully supportive family!”

Dominic was eight when he started taking lessons from Best. “I was a little hesitant since I had never taught anyone that young and he wasn’t able to reach the pedals,” Best said, “but I agreed to give it a try, and the rest is history.

“In 40+ years of teaching, I have worked with hundreds of students, many of whom have gone on to be conservatory-trained full-time musicians. But when it comes to sheer talent at so young an age, Dominic is clearly the most astounding.”

Best said he keeps asking himself: “How can a kid do this?”

The view from Manhattan

Like Dominic, Raymond Nagem, the associate director of music at the Cathedral Church of Saint John the Divine, can be viewed on YouTube playing a pipe organ. Dominic will be playing the last movement of Vierne’s Sixth Organ Symphony in the Cathedral Church’s “The Great Organ: It’s Sunday” program at 5 p.m. May 13, 2018.

Nagem emailed these comments in response to questions:

“Our organ recital series at St. John the Divine features talented organists from across the country. We’ve heard Dominic’s playing and he is absolutely worthy of an invitation to perform here. …

“I was playing the organ at 12 — I started when I was 11. It definitely took me many months of work at the beginning to build up independence and coordination between hands and feet. The feet have to be able to play a completely independent line of music while the hands may be doing something else.

“But I think at any age, hard work, dedication, and love for great music will produce results. Dominic’s playing certainly shows that he is passionate about playing the organ, and we’re very glad he is!”

City of Lights (and Pipes)

One suspects that Dominic, a fan of interstate highways, will be doing a lot of traveling in his career.

“I’d like to visit the two largest pipe organs in the world,” he said, “in Philadelphia and Atlantic City, N.J. … And the Cathedral of Notre Dame in Paris.”

Regarding his church music he said: “During my first Mass I was almost paralyzed by stage fright.” But now: “I don’t get stage fright in Masses.” Now he just tightens those shoelaces, a sign of smoke to come.

Is he driven to be the No. 1 organist in the world?

“I never really thought about it; let me see,” he said.

“That’s not one of my goals. I have some good gifts, which might put me in No. 1 place, although it’s very, very unlikely. I just try to be the best organist I can be with my talents.”

His favorite composer right now is the French composer Vierne. “I’m beginning to like Bach’s works, but I haven’t played a lot of him,” Dominic said.

His father is a big proponent of “right mental habits,” and something creative is bubbling in Dominic’s head. Asked if he does any composing himself, or improvising, he said:

“That’s kind of a complicated question to answer. I’m planning out organ symphonies and how they’ll go, but it might be ten years before one of them gets published.”

What side of him will they reflect? Serious? Jocular? Kid? Adult?

Dominic Fiacco plays the organ at the recent Monday Night Concert at St. Joseph-St. Patrick Church in Utica. “The best composers bring lots of passion into their music; you can feel what the composer was thinking,” Dominic says. – PHOTO COURTESY BOB STRONACH, OFS