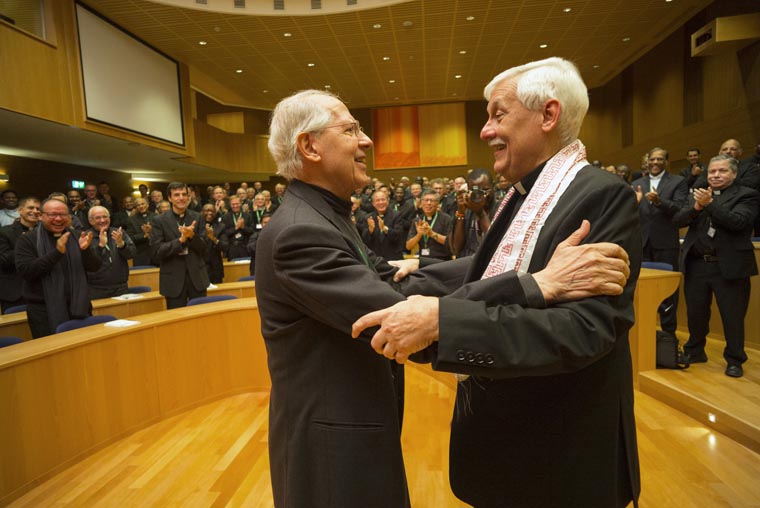 ROME (CNS) — Jesuit Father Arturo Sosa Abascal, 67, a member of the Jesuits’ Venezuelan province, was elected the first non-European superior general of the Society of Jesus.

The 212 voting delegates to the Jesuit general congregation elected Father Sosa Oct. 14. He succeeds Father Adolfo Nicolas, 80, who had asked to resign because of his age.

Pope Francis was informed of the election of Father Sosa before the Jesuits announced it publicly.

The election came after four days of prayer, silence, and quiet one-on-one conversations among the voting delegates, who were chosen to represent the more than 16,000 Jesuits around the world.

Reacting to his election, Father Sosa told Vatican Radio, “I have the feeling of needing great help; now the great challenge begins.”

The work of the Jesuits isn’t the responsibility of one person, but of the entire order, whose members are “very good,” Father Sosa said.

In an interview Oct. 7 about the pre-election phase of the congregation, Father Sosa said delegates come from different countries, but they share a common culture linked to their experience of the Ignatian spiritual exercises and practices of discernment. “We have a long tradition and a strong desire to listen to the same voice, that is the voice of the Holy Spirit,” he said in an interview published on the Jesuits’ gc36.org website.

Father Sosa was born in Caracas on Nov. 12, 1948. He joined the Jesuits in 1966 and was ordained to the priesthood in 1977, according to a press release from the Jesuits.

From 1977 to 1996, he was the director of “Centro Gumilla,” a center of research and social action of the Jesuits in Venezuela.

He was invited to teach at Georgetown University’s Center for Latin American Studies in 2004, and he was a professor of Venezuelan political thought at the Catholic University of Tachira. He has published a number of works, mostly about the history and politics of Venezuela.

He has a degree in philosophy from the Catholic University Andres Bello in Caracas, a degree in theology from the Pontifical Gregorian University in Rome, and a doctorate in political science from the Universidad Central de Venezuela.

He speaks Spanish, Italian, and English, and he understands French.

His expertise in political science and experience dealing with the difficult situation in Venezuela means he is also highly “capable of facing tensions that may arise in the world,” Father Spadaro said. He added that the priest knows fellow-Jesuit Pope Francis well and “they esteem each other.”

The resignation of Father Nicolas and the election of Father Sosa came during the order’s 36th general congregation, which began Oct. 2. After the election, the gathering was to continue as delegates focus on questions of Jesuit identity and governance, vocations, mission, and collaboration with the laity.