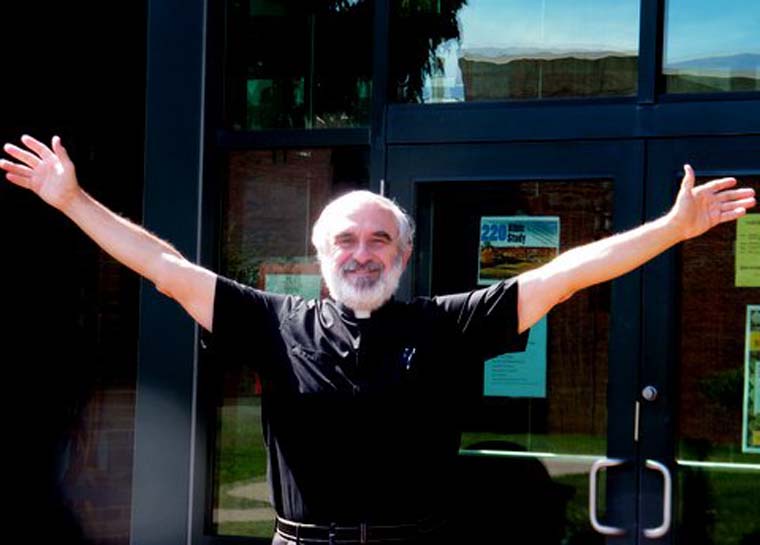 It is with a heavy heart that I pass along news of the passing of John Bucki, S.J. He died on Saturday, Sept. 2 in St. Barnabas Hospital in the Bronx, where he was taken earlier this week after his health deteriorated following a courageous battle with lung cancer. He was 67 years old.

John has been at the College since 2012, when he came to Le Moyne to serve as the director of campus ministry and rector of our Jesuit community. Since that time, he has become a mainstay at campus events of every kind  Masses, commencements, student celebrations and service activities, to name but a few.

Always welcoming and cheerful, John’s exuberance was contagious. When not fulfilling his many duties in campus ministry, he could be found taking photos all around campus and posting them on social media. Though only here for five years, he loved Le Moyne, and the Le Moyne community loved him.

Before coming to Le Moyne, he spent 11 years as the director of campus ministry at Canisius College. Previous to that, from 1988 to 2000, he was an associate pastor at St. Francis Xavier Church in New York City. A Buffalo native, he has been a Jesuit for 49 years and a priest for 38 years. He studied at Fordham University in New York City and at the Jesuit School of Theology in Berkeley, California. For many years he enjoyed working in New York City in parish and social ministry and at various times he has lived in Africa and the Philippines.

Calling hours will be held on Friday, Sept. 15 from 3 to 5 p.m. and 7 to 9 p.m. at the Panasci Family Chapel at Le Moyne, with a funeral Mass taking place at noon on Saturday, Sept. 16 in the Chapel. Interment will be at the Jesuit Cemetery in Auriesville, N.Y.

I ask that you join with me in prayer for John, his family, friends, and all those whose lives he touched. We know that he is looking down on us from heaven, arms outstretched with a smile on his face.