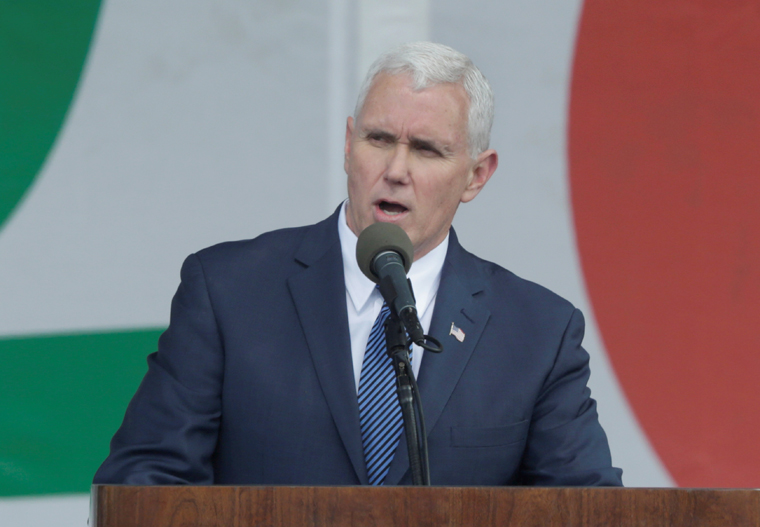 WASHINGTON (CNS) — Vice President Mike Pence told pro-life advocates from across the U.S. Jan. 27 that “life is winning in America, and today is a celebration of that progress.”

“More than 240 years ago, our founders declared these truths to be self-evident — that we are, all of us, endowed by our Creator with certain unalienable rights and that among these are life, liberty and the pursuit of happiness,” he said. “Forty-four years ago, our Supreme Court turned away from the first of these timeless ideals, but today, generations hence — because of all of you and the many thousands who stand with us in rallies across this country — life is winning again in America.”

Pence said President Donald Trump had asked him to address the March for Life rally. “He asked me to thank you for your support, for your stand for life and your compassion for the women and children of America.”

“Our president is a man with broad shoulders, a big heart,” Pence said. “His vision, his energy, his optimism are boundless, and I know he will make America great again. From his first day in office, he has been keeping his promises to the American people. Over at 1600 Pennsylvania Avenue, we’re in the promise-keeping business.”

He pointed to Trump’s Jan. 23 executive action reinstating what’s called the Mexico City Policy, which bans tax dollars from funding groups that promote or perform abortion in other countries. He said the administration would work with Congress to stop taxpayer funding of abortion “and devote those resources to health care services for women across America.”

On Jan. 24, the House passed the No Taxpayer Funding for Abortion Act, making the 41-year-old Hyde Amendment permanent. The amendment, which has had to be approved each year as part of the budget for the U.S. Department of Health and Human Services, prohibits tax dollars from paying for abortion except in cases of rape, incest or threat to the woman’s life. The Senate has yet to act on a companion bill, but Trump has said he will sign it into law when the measure reaches his desk.

“I urge you to press on,” Pence told the March for Life rally-goers. “Let your gentleness be evident to all. Let this movement be known for love, not anger. Let this movement be known for compassion, not confrontation. When it comes to matters of the heart, there is nothing stronger than gentleness. I believe we will continue to win the minds and hearts of the rising generation if our hearts first break for mothers and their unborn children and meet them where they are with generosity, not judgment. To heal our land and restore a culture of life, we must continue to be a movement that embraces all and shows the dignity and worth of every person.”

Pence’s wife, Karen, introduced her husband. She noted this March for Life was not the first for the Pence family; they have attended the event for the past 16 years, “but it is the warmest,” she joked. By midday, the temperature in Washington was in the low 40s. Previous marches have taken place in frigid temperatures. Last year’s turnout was affected by a blizzard.

Karen Pence said of her husband that she had never met anyone “who has more compassion for women, for children and for the American people. He’s one of the kindest people that I know.”

“Your courage, your conviction and your faith are impressive and consequential,” she told the crowd. “This is a new day, a new dawn for life. Why are we here? What does it mean to stand together to be part of this incredible movement, to face criticism, ridicule, and laws and lawmakers (against life)? It means to protect and promote the most precious gift in the world — the gift of life. It means to stand up stand tall and stand together against the indifference and the indefensible and on behalf of babies in the womb.

“This is a time of incredible promise for the pro-life and pro-adoption movement,” she continued. “Women who face troubled pregnancies should know they are not alone, that they are not judged, they are protected and cared for and celebrated.”

Conway told pro-life supporters: “Allow me to make it very clear — we hear you, we see you, we respect you, and we look forward to working with you, and yes, we march, we walk, we run and endeavor forward with you.”

At midday, there was no official crowd count from the March for Life organization. A CNN reporter said there were attendees “as far as the eye could see.”

After a lineup of speakers, rally participants planned to march from the National Mall to Constitution Avenue, then up the avenue to the Supreme Court.