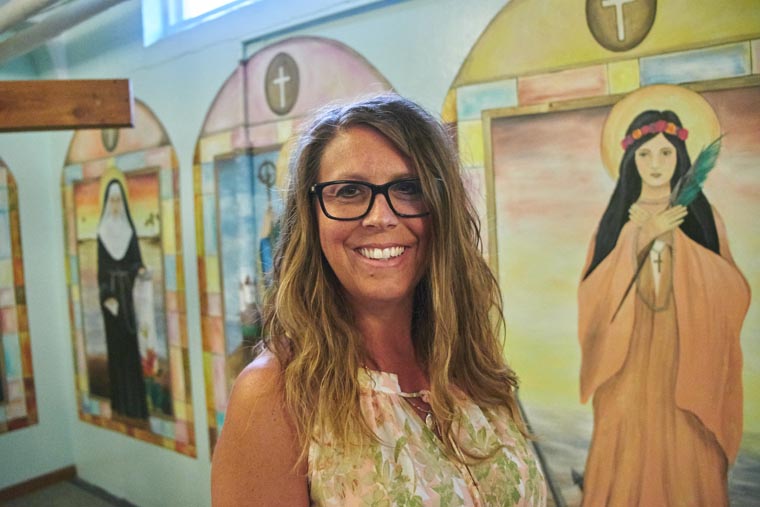 The faces of the saints appeared first. Their expressions are innocent and open, as if scanning for souls to inspire or assist.

Artist Rhonda Bertollini-Henderson then filled in the bodies and backgrounds, and now her colorful mural of five saints graces two walls in a corner of Marian Hall at St. Patrick’s Church in Jordan.

At the unveiling attended by about 60 people Aug. 15, Pastor Father John R. DeLorenzo sprinkled holy water on “these beautiful images of the saints for public veneration.”

Having blessed the mural “for our little church,” Father DeLorenzo also pointed to a plaque that asks God to bless Bertollini-Henderson always. The congratulations flowed at such a pace that she did not get to partake of the ice cream sundaes that were available after the ceremony.

The parishioners picked the saints in a vote; Bertollini-Henderson’s son Cory, 11, collected the votes for the winners.

Each painting, which is a little smaller than life-size, is framed by a painted stained-glass window. So now St. Patrick’s has real stained-glass windows made by the Keck Company in the 1950s, and an acrylic-paint representation of stained glass made by Bertollini-Henderson in two weeks on her 2016 summer vacation. On Sept. 7, she began her 21st year as an art teacher at Bishop Ludden Junior-Senior High School. She also chairs the art department.

“She did it free of charge, just out of kindness, and she’s very talented,” said Mary Badger, director of faith formation at St. Patrick’s.

“I think she’s unbelievable,” Father DeLorenzo said. “She sweated down here in sweltering heat for over two weeks.

When he finally took in the mural, he said, “I was amazed. I sat here and I just couldn’t believe it. … I didn’t expect such beauty, really. They’re lovely. I didn’t expect that at all, I didn’t know what to expect. But, I tell ya, I love it. And it’ll be nice for the children.”

That was the main reason why Bertollini-Henderson created the mural: During Mass, the children are excused in order to go into Marian Hall with two teachers who instruct them in the Scripture readings.

The children’s area was nice, having been repainted in a blue-green tone, and the Altar and Rosary Society had also raised money to install new basement windows. But to Bertollini-Henderson, the area was still a little plain.

“My intent was to make it look like a little church for the kids down here in the corner, so they felt like they were in church and it was pretty,” she said.

Badger thinks the paintings of the saints are “very realistic but they haven’t lost the kind of mystical quality.”

Asked about the paintings’ aura, the artist said, “Well, you never know, I guess. … Maybe there’s a little mystical quality about them. I sure had fun making them. I loved it. I could paint like that all the time.”

Working from 9:30 a.m. to 2:30 p.m. for a total of 58½ hours, Bertollini-Henderson mixed the acrylic paints and applied multiple layers; the paint resisted application to the drywall and concrete. To add a shimmering effect, she used metallics: gold, silver, and bronze.

The painting of St. Patrick required innovation. A water pipe runs vertically on the wall right next to the saint’s image. Many people who attended the unveiling were amazed by Bertollini-Henderson’s solution: In only about a half-hour of frenzied improvisation, she painted a castle on the pole to make it look like a natural part of St. Patrick’s Emerald Isle. She added scenes of a cliff with rich brown dirt and a pleasing blue sky.

Parishioner Bob Decker, a photographer whose dad was a painter, was dazzled by the solution to the pole dilemma.

“I thought that was very hard to do, No. 1,” he said, “and get the right proportion and everything. … That’s very nice. That was a very unique thing.”

Bertollini-Henderson is particularly proud of the castle, perhaps the most artful water pipe anyone is likely to see. “I thought the kids would think that was cool,” she said.

Her son Corey certainly does.

“It’s really nice,” he said of the whole project.

He added: “I think she did a really good job on it and I like all the detail and stuff in the stained-glass windows part of it.”

“She’s my favorite artist,” said her mother, Sue Bertollini. “I have her art hanging all over my house.”

“Her elementary art teacher said she was the finest art student she ever had,” said her father, Bob Bertollini.

“I’ve sat there and watched her draw before, and it’s just amazing,” said her husband, Bob Henderson.

Officials at St. Patrick’s were just as impressed as Bertollini-Henderson’s family, which includes her older son, Alec, 15.

“It’s added so much more holiness to the area,” said Madeline Nolan, coordinator for the children’s-liturgy ministry.

She added: “You feel the holiness of the saints. I believe this is going to touch children’s lives and that’s what we have to do for the future of our church.”

Roseanne Lewis, president of the Altar and Rosary Society, noted the improvements to Marian Hall, and “this was absolutely the topping of it all. We couldn’t have imagined it more beautiful with more colors. We were thrilled that she offered her talent to us.”

Next summer, she plans to paint a landscape with Jesus sitting on a rock with different-aged children.  The mural Bertollini-Henderson painted this summer features plenty of water in the background, but next summer’s project will be more of a pastoral scene with sheep.

“Yeah, they’ll be no water,” she said, “maybe a little stream; the sheep gotta drink too, right?”

Father DeLorenzo appreciates all her efforts.

“It’s never looked so nice down here,” he said.