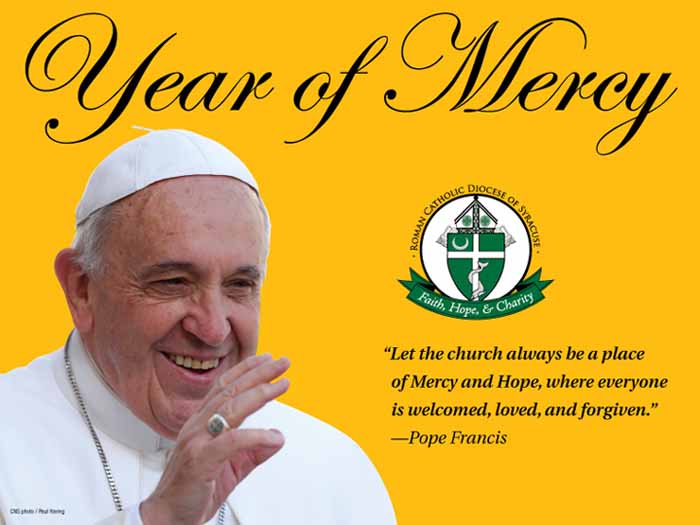 Editor’s note: During the Holy Year of Mercy, Father Christopher R. Seibt will explore various aspects of the jubilee in a series of Sun columns. This is the fifth column in the series.

“Mercy is not an abstract word, but a style of life… It is one thing to speak of mercy and another to live mercy” (Pope Francis, Eighth Jubilee Audience, June 30th 2016). With these fitting words of our Holy Father, Pope Francis, we transition from our consideration of mercy encountered to our reflections on mercy extended. The basic sources of God’s mercy that we have examined — the Scriptures, the Church, and the Sacraments — were important reminders to us that we have a God who is merciful, a Church built on the foundation of God’s mercy, and sacraments that make his mercy in and through Christ present and available to us. All we have to do to encounter it is to first recognize that we are in need of it.

But how do we extend it to others? How do we live mercy? By following the example of Jesus in the gospels — his words, his actions, and his entire person. Like him, we open our eyes to the misery of a world affected by original sin, to the needs of our brothers and sisters who cry for help and do what we can to reach out to them so that they will know the love of God and experience the power of his kingdom (Misericordiae Vultus, 15). Who better to teach us how to do this than the saints?

One of the challenges of our time is the fact that many people think of the saints as social workers, good humanitarians, or simply as people who did nice things for other people. This narrow view is problematic because being a saint involves so much more. It does not mean that one has to be perfect or successful. Rather, one has to be faithful. One has to strive for holiness by trying to lead a life that is in union with God (The Catechism of the Catholic Church, Glossary). Consequently, with regard to mercy the saints “did not limit themselves to witnessing their faith through works of mercy; rather, they lived, first of all, within mercy, and as a result they expressed the beauty of it in the holiness of their lives.” They were “portraits of holiness within which the face of mercy emerges” (The Pontifical Council for the Promotion of the New Evangelization, The Saints in Mercy, 7).

Some saints like Faustina Kowalska announced mercy. Others like John Vianney were ministers of mercy. Some like Katharine Drexel, Damien de Veuster, and Marianne Cope extended mercy to the marginalized and to the least. And others like Peter Claver were involved in missions of mercy toward those far off. These men and women, who represent a greater cloud of witnesses, were able to extend God’s mercy to others in an authentic way because they had first encountered it themselves. What helped them to live within mercy regardless of whom or how they served was the fact that they each possessed and lived the theological virtues of faith, hope, and charity.

Faith. The saints received a special grace from God that enabled them to live differently, by a deeper knowledge and trust. This moved them to believe in God and all that he has said to us and revealed to us (CCC, 1814). Moreover, they lived belief in the context of the Church. For them faith was a new way of seeing things as centered on Christ. It brought them salvation. And it opened them to the transforming power of his love (Lumen Fidei, 20). As a result, they committed themselves personally to him and to his work of redemption in the world.

Hope. The saints desired to be happy, but they did not look for happiness in created or passing things. Rather, they looked to heaven and to the promise of eternal life. They trusted in this promise because it was made by Christ himself throughout the gospels. They also relied on God to give them the help they needed to get there (CCC, 1817-1821). Hope is also what helped the saints to live differently. It is what moved them to be concerned not only with saving themselves, but also with what they could do in order that “the star of hope may rise” for others and inspire them to fix their eyes on God and his promise of eternal life (Spe Salvi, 48).

Charity. The saints took seriously the two greatest commandments: “Love the Lord, your God, with all your heart, with all your soul, and with all your mind” and “Love your neighbor as yourself” (Mt 22:37-39). They also took seriously the criteria for judgment that Jesus provides in the Gospel of Matthew (Mt 25:31-46). Nevertheless, they were more than just good people who did nice things for other people. Yes, they responded to the material needs of human beings in a particular time and place by giving them proper care. But, they also responded to the “something more” that human beings really need: the need for heartfelt concern, which is what helps them to experience the richness of their humanity. This is what distinguishes the charitable activity of the Church from all other organizations (Deus Caritas Est, 31).

In other words, the saints were motivated by faith and hope not only to love God above all things, but also to love their neighbor with the love of Christ that they themselves had received. Doing so was a way for them to imitate Christ’s love. It was an opportunity for them to serve God himself, present in the men and women for whom they cared (CCC, 1822-1827). Their charity, their love is what made their faith and hope real and visible to others, particularly those in need. And, it is what helped to draw those whom they served into God’s Kingdom so that they too might encounter his mercy and accept his gift of salvation. By living within mercy the saints demonstrated that loving God is the “heart of the Christian faith” (Deus Caritas Est, 1).

Many people who read the lives of the saints find them to be very inspiring because they teach us how to live mercy. Not simply by what they did for others but more importantly by who they were and how they lived. Through the virtues of faith, hope, and charity they followed the example of Jesus in the gospels. In doing so, they extended God’s mercy to others and they show us how to do the same, namely, by making God the foundation of our lives and the motivation of all that we do.

Father Christopher R. Seibt is parochial vicar of the Church of Ss. John and Andrew in Binghamton.