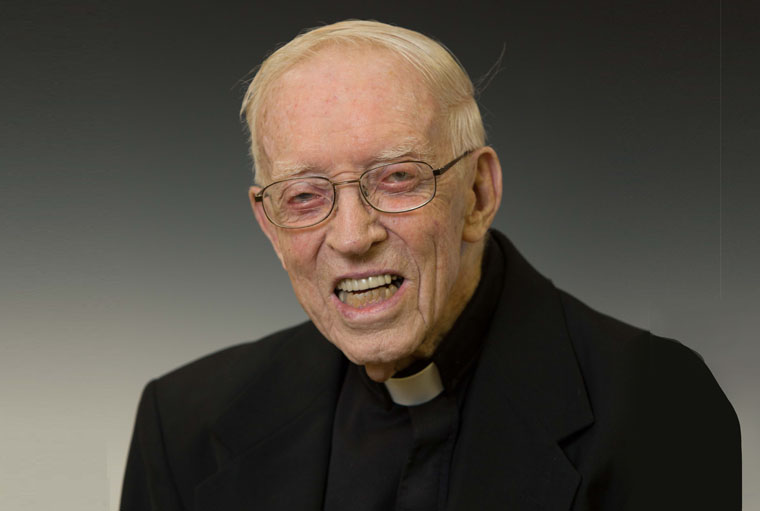 ROME — If Msgr. Francis J. Culkin could have personally selected the readings for his Mass of Christian Burial, they would’ve mirrored those chosen for him, said friend Father Paul Mathis.

Msgr. Culkin entered into his eternal rest on March 23 at the age of 101. His funeral Mass was celebrated by Bishop Thomas Costello on March 29 at St. Peter’s Church in Rome, a place where Msgr. Culkin spent 19 years of his ministry.

In the Gospel of Matthew 5, the beatitude, “Blessed are the poor in spirit; for theirs is the kingdom of heaven” really means wisdom, explained Father Mathis in his homily. “It means single-mindedness with no duality. When we are pure of heart God sees us the way He wants to be seen. I really believe the Monsignor’s mission in life was to be faithful and close to God.… He was a prayerful person,” he said.

Msgr. Culkin happily served as a priest for more than 70 years and the center of his life was the Eucharist, said Father Mathis. He said Msgr. Culkin kept a record of every Mass he said. The last entry was dated Nov. 17, 2015. At this milestone, Msgr. Culkin had said 34,017 Masses. “If I could say one thing that captures him best it would be ‘total service,’” Father Mathis said. Father Mathis noted that Msgr. Culkin was a beloved figure at four of the six Rome area parishes during his career: St. John the Baptist, St. Peter’s, St. Mary’s, all in Rome, and St. Joseph’s in Lee Center.

Father Mathis told of how, following graduation as an accounting major from Fordham University, Msgr. Culkin went to work for a typewriter company where he eventually found himself working on the mechanics of the typewriters themselves. Father Mathis said, “He said, ‘I realized then that it wasn’t going to be my vocation and I went home and worked in my father’s grocery store.’”

Msgr. Culkin was later “invited” by his pastor to become a priest. “So many vocations go unanswered because we forget to invite,” Father Mathis said to those in attendance. “It is simple, isn’t it? But, how profound it could be.”

Even well into his 90s, the monsignor continued to minister at nursing homes and hospitals. Father Mathis said, “His was a life of service.”

Father Philip Hearn, pastor at St. Mary’s/St. Peter’s parish, said, “I am happy to see so many people here for the monsignor. He touched the hearts of many people in the Rome area.” Father Hearn noted the many Sisters of St. Joseph who attended, including those in leadership positions, who traveled from Latham, N.Y. He also mentioned the family of Paul and Ines Worlock, who welcomed Msgr. Culkin to their home on Easter and Christmas.

In addition to serving in the Rome area parishes, Msgr. Culkin also ministered at St. John the Baptist in Syracuse, Immaculate Conception in Greene and St. Patrick’s in Jordan. He also served as the Episcopal Vicar of Northwestern part of Madison County and the Western part of Oneida County.

Msgr. Culkin was born Sept. 18, 1914, in Fulton, N.Y., the son of the late Frank and Mary Culkin. He received his training at Christ the King Seminary at St. Bonaventure and St. Bernard’s Seminary in Rochester and was ordained on June 3, 1944. He was predeceased by a sister, Mary Culkin. He is survived by a cousin, Barbara Fiebel of Alabama.