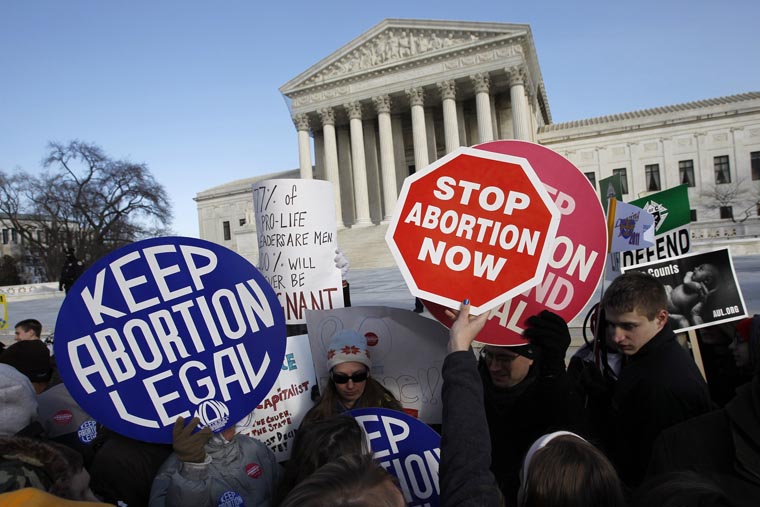 WASHINGTON (CNS) — Despite abortion having been part of the national debate for nearly a half-century, it remains a complex and complicated issue to a significant majority of Americans, according to a survey released April 17.

Sixty-two percent of Americans “see abortion as a complicated issue,” with 36 percent saying “it is simple and straightforward,” said the survey, “Young People Set to Impact the Debate on Women’s Health Issues,” issued by the Public Religion Research Institute.

The survey, which interviewed more than 2,000 Americans, has a margin of error of plus or minus 2.6 percentage points.

The PRRI survey found 54 percent of those polled say abortion should be legal in all or most cases, down 3 percentage points from the 57 percent who said the same in a Pew Research Center survey a decade ago.
However, the PRRI numbers indicate the United States’ youngest voters are more likely to support a so-called right to abortion.

“One piece of evidence that this may be more of a cohort effect is, when you look at the issues of whether abortion goes against their personal beliefs, there’s a generation gap, 44 percent of young Americans vs. 60 percent of seniors. This is an issue that is always wrapped up with moral and religious arguments, and young people are rooting it less there (in religion) than older people,” Jones said.

“If you want to go one step further, they have a less tenuous connection to religious organizations than older people,” especially seniors, he added. “Four in 10 (younger Americans who claim no religious affiliation whatsoever. That is a factor of three,” meaning young adults are three times less likely to claim a religious affiliation than seniors. “Beliefs on this matter are connected to religious values” more than others, he said.

“Fewer than half of women (45 percent) and men (42 percent) say abortion services should be covered by most health insurance plans,” the survey said. Men were less supportive of women when queried about what kinds of reproductive services should be covered by health insurance, including testing and screening for sexually transmitted diseases, prescription birth control, infertility treatments and erectile dysfunction medication such as Viagra.

Abortion was the only item where a majority of both men and women were opposed to it being covered.

“Women are in a less secure financial position than men are,” Jones said, and want reproductive health services to be covered in greater numbers.

The survey noted, “Women are significantly more likely than men to prioritize a candidate’s position on abortion when making voting decisions.” Twenty-four percent of women say they would only vote for a candidate who shares their views on the issue, nearly twice the percentage of men who said the same.

The survey added, “Americans of different religious backgrounds largely support including discussions of same-sex relationships in sexuality education classes.” This view was held by 64 percent of Catholics; the only group polling a higher percentage were religiously unaffiliated Americans at 74 percent.

It’s not a new phenomenon, Jones told CNS. “We’ve seen that actually consistently for at least a decade” on LGBT issues ranging from nondiscrimination laws to same-sex marriage, he said. “Catholics have been 4 or 5 points more supportive than the rest of the population,” Jones added, with “no divide” between Hispanic and white Catholics.

The Catholic Church upholds traditional marriage, teaching that it is between one man and one woman.

Jones supplied CNS with results from Catholic survey respondents not in the final report.

“On most questions, Catholics overall look similar to the general population, but there are significant differences on many questions among Catholics by frequency of religious attendance,” he said. Forty-three percent reported going to Mass weekly, with 56 percent saying they went three times a month or less.

“A majority of Catholics overall (52 percent) say at least some health care professionals in their community should provide legal abortions, but there are strong disagreements by frequency of attendance,” he added. “Catholics who attend religious services weekly or more are significantly less likely than those who attend less frequently to agree with this statement (37 percent vs. 63 percent).

Majorities of Catholics say abortion goes against their personal beliefs — 70 percent of weekly Massgoers and 51 percent of those who attend less frequently, according to Jones.

“One place,” he said, “where there is agreement: Strong majorities of Catholics, regardless of attendance rates, believe that lawmakers are spending too much time on the issue of abortion at the expense of other important issues.”