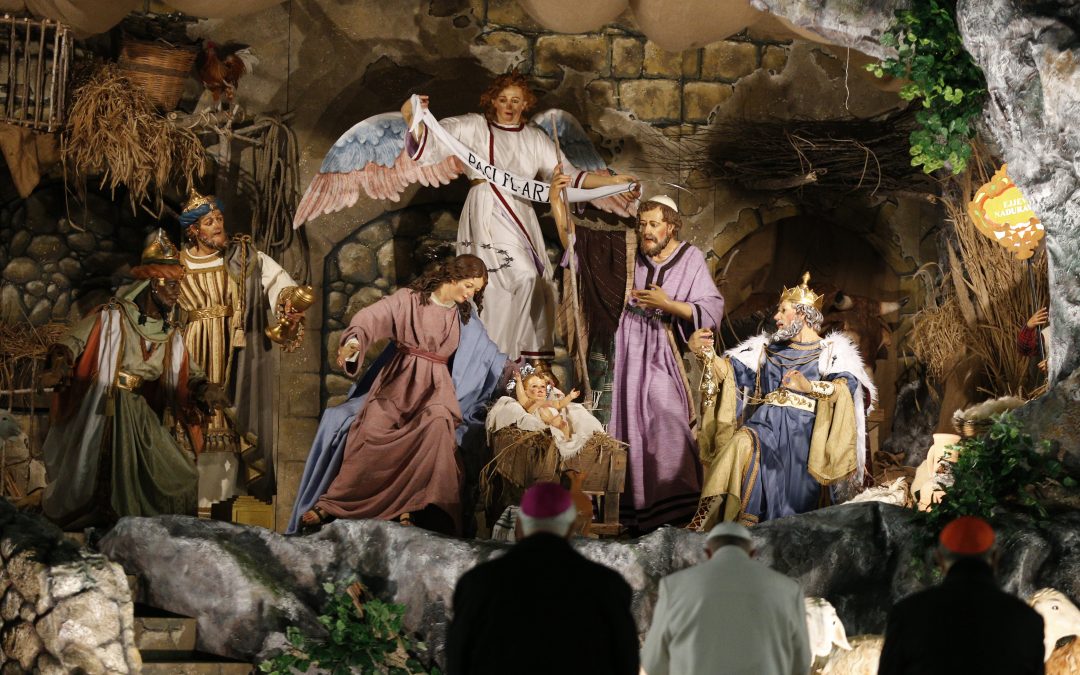 VATICAN CITY (CNS) — Whether the new year will be good or not depends on us choosing to do good each day, Pope Francis said.

“That is how one builds peace, saying ‘no’  to hatred and violence — with action — and ‘yes’ to fraternity and reconciliation,” he said Jan. 1, which the church marks as the feast of Mary, Mother of God and as World Peace Day.

Speaking to the some 50,000 pilgrims gathered in St. Peter’s Square for the first noon Angelus of 2017, the pope referred to his peace day message in which he asked people to adopt the “style” of nonviolence for building a politics for peace.

Lamenting the brutal act of terrorism that struck during a night of “well-wishes and hope” in Istanbul, the pope offered his prayers for the entire nation of Turkey as well as those hurt and killed. A gunman opened fire during a New Year’s Eve celebration at a popular nightclub early Jan. 1, killing at least 39 people and wounding at least 70 more.

“I ask the Lord to support all people of good will who courageously roll up their sleeves in order to confront the scourge of terrorism and this bloodstain that is enveloping the world with the shadow of fear and confusion,” he said.

Earlier in the day, the pope spoke of how maternal tenderness, hope and self-sacrifice were the “strongest antidote” to the selfishness, indifference and “lack of openness” in the world today.

Celebrating Mass in St. Peter’s Basilica, which was decorated with bright red anthuriums, evergreen boughs, white flowers and pinecones brushed with gold paint, the pope said that a community without mothers would be cold and heartless with “room only for calculation and speculation.”

The pope said he learned so much about unconditional love, hope and belonging from seeing mothers who never stop embracing, supporting and fighting for what is best for their children incarcerated in prisons, ill in hospitals, enslaved by drugs or suffering from war.

“Where there is a mother, there is unity, there is belonging, belonging as children,” he said.

Just like all mothers of the world, Mary, Mother of God, “protects us from the corrosive disease of being ‘spiritual orphans,’” that is when the soul feels “motherless and lacking the tenderness of God, when the sense of belonging to a family, a people, a land, to our God, grows dim.”

“This attitude of spiritual orphanhood is a cancer that silently eats away at and debases the soul,” which soon “forgets that life is a gift we have received — and owe to others — a gift we are called to share in this common home,” he said.

A “fragmented and divided culture” makes things worse, he said, leading to feelings of emptiness and loneliness.

“The lack of physical and not virtual contact is cauterizing our hearts and making us lose the capacity for tenderness and wonder, for pity and compassion,” he said, as well as making us “forget the importance of playing, of singing, of a smile, of rest, of gratitude.”

Remembering that Jesus handed his mother over to us “makes us smile once more as we realize that we are a people, that we belong” and can grow, that we are not just mere objects to “consume and be consumed,” that we are not “merchandise” to be exchanged or inert receptacles for information. “We are children, we are family, we are God’s people.”

Mary shows that humility and tenderness aren’t virtues of the weak, but of the strong, and that we don’t have to mistreat others in order to feel important, he said.

The pope also presided over an evening prayer service with eucharistic adoration and the singing of a special hymn of thanksgiving to God Dec. 31 in St. Peter’s Basilica.

As the year ends, he said in his homily, he asked people to reflect on how God has been present in their lives and to thank the Lord for all signs of his generosity, “seen in countless way through the witness of those people who quietly took a risk.”

Gazing upon the manger, we remember how Jesus “wanted to be close to all those who felt lost, demeaned, hurt, discouraged, inconsolable and frightened. Close to all those who in their bodies carry the burden of separation and loneliness, so that sin, shame, hurt, despair and exclusion would not have the final word in the lives of his sons and daughters.”

His sacrifice and love challenges people “not to give up on anything or anyone,” and to find the strength to forge ahead “without complaining or being resentful, without closing in on ourselves or seeking a means of escape, looking for shortcuts in our own interest.”

“Looking at the manger means recognizing that the times ahead call for bold and hope-filled initiatives, as well as the renunciation of vain self-promotion and endless concern with appearances.”

He urged everyone to help “make room” for young people, who are often marginalized and forced to migrate or beg for undignified jobs. Everyone has a duty to help them grow and fulfill “the dreams of their ancestors” in their own nation and community.

After the prayer service, the pope walked into St. Peter’s Square instead of using the popemobile. He walked the entire periphery of the square, stopping to shake hands, receive cards and notes, offer happy New Year’s greetings, bless babies and chat with people lining the barricades.

In the center of the square, the pope prayed silently before the Vatican Nativity scene, which was created by a Maltese artist. He also stood before the twisted and crumbled spire from the St. Benedict Basilica in Norcia, which like dozens of villages and towns, was damaged in a series of earthquakes in central Italy.