New York allows some business to resume, but guidance on churches unclear 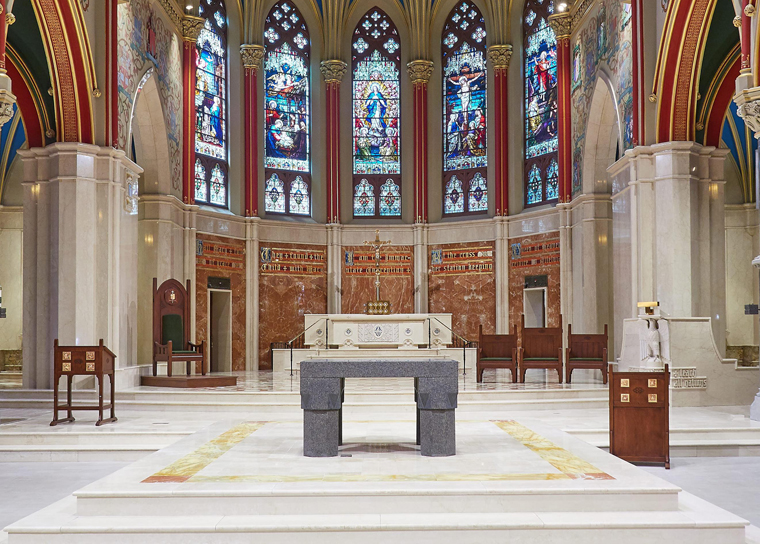 Some businesses in Central New York resumed operation May 15, but it’s unclear where churches fit into the state’s reopening plan.

Diocesan Masses remain suspended to prevent spreading the novel coronavirus, which causes the respiratory illness COVID-19, as Bishop Douglas J. Lucia and diocesan leaders review how and when public services and parish events could resume safely. Public Masses, schools, and businesses in New York have been closed for two months as the global pandemic spread exponentially in the United States.

New York is following a four-phase plan to reopen businesses and facilities in the state. The diocese’s seven counties fall in regions approved to allow some businesses to resume operations, with modifications. The regions meet benchmarks, including a declining number of COVID hospitalizations and testing enough people to allow officials to monitor spread of the disease, state officials said May 14.

Industries allowed to resume operation May 15 are construction; agriculture, forestry, fishing, and hunting; retail (curbside or in-store pickup or drop off); manufacturing; and wholesale trade. Officials will assess Phase 1 before approving more businesses to reopen. Beaches across the state can reopen Memorial Day weekend.

Houses of worship are not listed in the state’s plan, New York Forward, although local and state officials say public church services are likely to be in Phase 4, which includes arts, entertainment, recreation, and education. Phase 4 is at least six weeks away. Church services fall under “the guidance on large gatherings,” New York Gov. Andrew Cuomo said May 14.

“It has nothing to do with religion, it’s the gathering,” he said. “Large gatherings have been where this started. We had the first big cluster in New Rochelle. The last thing we want is 100, 200 people in close proximity.”

Syracuse Mayor Ben Walsh and Onondaga County Executive Ryan McMahon said in press briefings May 14 they need more guidance on when religious institutions could safely resume services. “Large [groups of] people together is a risk and we have to mitigate it,” Walsh said.

One of the first large outbreaks in the United States started in New Rochelle, a small city in Westchester County. The novel coronavirus was spread to many people who attended Young Israel of New Rochelle, where a lawyer who had tested positive was a member. More than 100 families who attended a funeral and a bat mitzvah in late February came in contact with the lawyer and were ordered to self-quarantine.

Lack of guidance from the state is frustrating, said Dennis Poust, director of communications for the New York State Catholic Conference, the public policy arm of the state’s eight bishops.

“The bishops believe at some point in the near future we can begin to resume public Masses with help from civic and health officials,” he said. “We’ve reached out to the governor’s office multiple times, as have our Protestant friends, as have our Jewish friends and no one is getting anywhere.”

Poust said the Conference does not seek a church-state battle over reopening. “We don’t see this as some infringement on our right to worship,” he said. “We see it as our shared moral responsibility to protect human life. We’re looking for dialogue and partnership.”

The state’s eight bishops made individual decisions on when to suspend Mass, and Poust expects the same process on resuming Masses and parish activities. “What’s true in the North Country is not what’s true in downtown Brooklyn,” he said. “The state is in very different places in this pandemic, but it would be helpful to have a dialogue with the state. We want them to hear our commitment to staying safe. We want to hear their thoughts on best practices to do it.”

In an April 21 letter to the diocese, Bishop Lucia said he was reviewing several recommendations and surveying pastors on their churches’ capacity in order to draft potential policies.

“I anticipate that once we are able to celebrate public Masses, there will be a seating capacity in our churches which will require the faithful to be flexible about the time they attend Mass,” he wrote. “Seating and Communion procedures will have to follow social distancing and safety precautions will have to be used throughout our time together.”

Dispensation from the Sunday Mass obligation will continue “for the foreseeable future because of the vulnerable population and the crowd sizes that will be permitted,” he said.

Poust said the faithful should be ready for different practices. “It’s not like we expect a green light from the governor and everything goes back to normal,” he said. “Flexibility is going to be the key. People are going to have to abide by the rules, including wearing masks. If they don’t, it’s going set us back.”