No war is holy, pope says at interreligious peace gathering 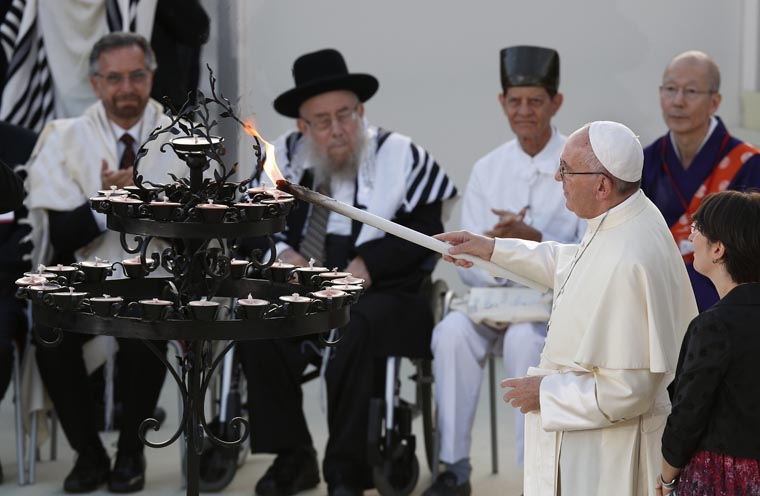 ASSISI, Italy (CNS) — Violence in the name of God does not represent the true nature of religion and must be condemned by all faiths, Pope Francis said.

“We never tire of repeating that the name of God cannot be used to justify violence. Peace alone, and not war, is holy!” the pope said Sept. 20 at the closing ceremony of an interreligious peace gathering in Assisi.

Following a prayer service with Christian leaders, including Orthodox Ecumenical Patriarch Bartholomew of Constantinople and Anglican Archbishop Justin Welby of Canterbury, the pope joined religious leaders from around the world to appeal for peace and unity.

The religious leaders also heard the experience of a victim of war from the Syrian city of Aleppo and prayed for those who had died in conflicts around the world.

In his speech, the pope called on believers of every faith “to confront the great sickness of our time: indifference.”

“It is a virus that paralyzes, rendering us lethargic and insensitive, a disease that eats away at the very heart of religious fervor, giving rise to a new and deeply sad paganism: the paganism of indifference,” he said.

Recalling the look on the faces of the refugees he and Patriarch Bartholomew met on the Greek island of Lesbos in April, the pope called on religious believers to not remain indifferent to the suffering of others but instead to be the voice of those unheard.

“I am thinking of the families, whose lives have been shattered; of the children who have known only violence in their lives; of the elderly, forced to leave their homeland. All of them have a great thirst for peace,” he said. “We do not want these tragedies to be forgotten.”

True peace, he said, is not a result of “negotiations, political compromises or economic bargaining, but the result of prayer.”

A peace “that is not illusory,” the pope said, must be accomplished through concrete actions of assistance to those in need and cannot be achieved with “the ‘virtual’ approach of one who judges everything and everyone using a computer keyboard, without opening his eyes to the needs of his brothers and sisters, and dirtying his hands for those in need.”

In continuing the legacy of the 1986 peace gathering St. John Paul II held in Assisi, faith leaders must join together in denouncing the use of religion to justify violence.

“Violence in all its forms does not represent the true nature of religion. It is the antithesis of religion and contributes to its destruction,” the pope said.

Pope Francis called on religious leaders to “free ourselves from the heavy burden of distrust, fundamentalism and hate” and instead be “artisans of peace” through prayer and action.

As religious leaders, he said, “we are duty bound to be strong bridges of dialogue, creative mediators of peace.”

“Let us assume this responsibility, reaffirming today our ‘yes’ to being, together, builders of the peace that God wishes for us and for which humanity thirsts,” the pope said.