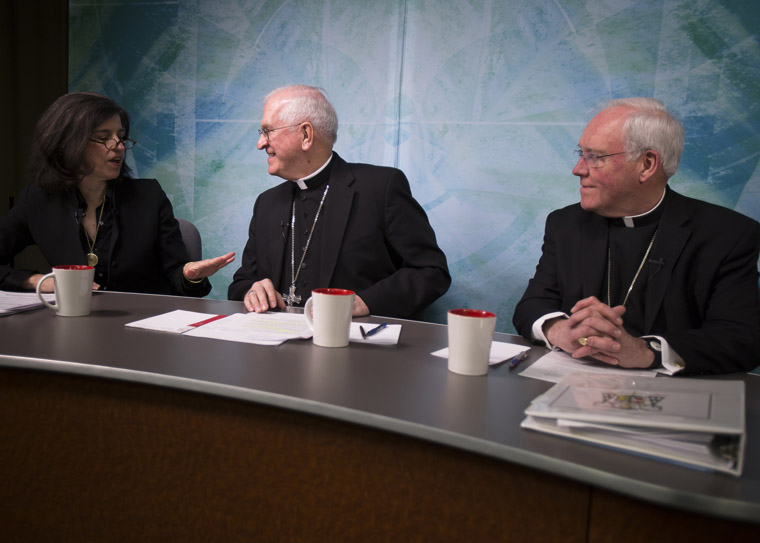 WASHINGTON (CNS) — Pope Francis’ apostolic exhortation on love and the family invites the church to see the daily struggles of families as an opportunity to encounter people the way Jesus encountered people with mercy throughout his life, Catholic observers said.

Because of its length — 256 pages — and the depth to which the pope explores love, marriage and church teaching on the family, the document deserves to be unpacked with patience and careful discernment for mercy to take root in the church’s response to real human needs, Catholic leaders told Catholic News Service.

The exhortation, “‘Amoris Laetitia‘ (The Joy of Love), on Love in the Family,” was Pope Francis’ reflection on the discussion, debate and suggestions raised during the 2014 and 2015 meetings of the Synod of Bishops on the family.

Archbishop Joseph E. Kurtz of Louisville, Kentucky, president of the U.S. Conference of Catholic Bishops, noted Pope Francis’ repeated calls of the importance of clergy taking time to get to know individual circumstance and discuss with people how they can discern God’s teaching for their lives.

The pope points to “dialogue, which requires both speaking and listening, and discerning to help people see what their next step is” as key to his call for mercy, Archbishop Kurtz, a member of both synods, said in an interview after participating in an online news conference at USCCB headquarters.

The archbishop said the pope is attempting to help people encounter Jesus and through that encounter feel the love of God. “There is that sense of being very intentional because we carry with us the capacity to walk with people to Christ. And he’s saying husbands and wives, you also have that potential,” Archbishop Kurtz said.

“We all share that responsibility to conversion about what does it mean to deepen our sense and let Christ shine more clearly through so people don’t see the rule (of the church), they see the person of Jesus coming through,” he explained.

During the news conference, Archbishop Kurtz described the exhortation as a “love letter to families” that invites all people to “never stop growing in love.”

“It is also a love letter calling the church, the family of God, to realize more and more her mission to live and love as a family,” he said.

“We also have room to grow and improve and we welcome the pope’s encouragement for the renewed witness to the truth and beauty of marriage of a more tender closeness and families who are experiencing real difficulties,” Bishop Malone said.

Both prelates said the exhortation builds on the teaching of the Second Vatican Council as well as Pope Francis’ post-conciliar successors, Blessed Paul VI, St. John Paul II and Pope Benedict XVI and invites ministers to welcome people who may have turned away from the church because they feared their status — as single parents or being in same-sex relationships, or being divorced and civilly remarried — would mean they are unwelcome in the church.

“I think the call is for the whole church, the bishops, the priests, the lay leadership, but also each family to be able to say ‘God has given me such beauty in my family and things with his help can be much more. I think that’s what he is talking about the grace that is at work in each one of our lives,” Archbishop Kurtz said in response to a question.

Helen Alvare, professor of law at the Antonin Scalia Law School at George Mason University, who was the third news conference participant, described the document as balancing the natural longing for marriage in society with a “raw appreciation for how bad the situation can be on the ground.”

The pope acknowledges misperceptions about church teaching on sex, that some perceive marriage as evil so avoid it, the fear of raising children, and ideas that marriage has become an “empty ritual,” Alvare said.
She also identified the pope’s deep concerns for children, whose rights are often overlooked because of the challenges facing many families.

While the exhortation upholds church teaching on the sanctity of marriage and cites the importance of family life to the church, it calls people to do more than simply reiterate that teaching, but to put it into “pastoral motion,” Catholic leaders told Catholic News Service.

John Grabowski, associate professor of moral theology and ethics at The Catholic University of America and an expert tapped to attend last fall’s Synod of Bishops on the family, said the document serves to help church leaders “form and equip families to that families can become the pastoral instruments of ministry and evangelization to families.”

“He’s not diverging from the teaching of his predecessors. He’s saying ‘Let’s put this into pastoral application now,'” he said.

Grabowski, who with his wife, Claire, lead a marriage ministry for couples in their parish, St. Ignatius in Ijamsville, Maryland, sees the need for such programs emerging from the exhortation. “We need to stop seeing marriage formation as ending at the wedding,” he said.

The pope’s exhortation discusses how the church can be “honest, realistic and creative” in response to the needs of families, explained Jesuit Father Allan Deck, distinguished scholar in pastoral theology and Latino Studies at Loyola Marymount University.

He said the pope’s emphasis on the need to be open to ongoing discussion within the church and its response to “real families” would serve all families.

“He shows great sensitivity on the various positions people have in the church,” Father Deck told CNS. “He’s not moving back from his conviction that mercy and the attitudes that flow from mercy are at the foundation of the way the church needs to proceed because those are the qualities that we see in God.”

Father Deck added that he sees the influence of the pope’s Latin American roots in the document. “That means in our dealing with people, the church needs to show an ability to step into other people’s shoes, to go where they are instead of immediately requiring them to come where we are,” he said.

Jana Bennett, associate professor of theological ethics at the University of Dayton in Ohio, said she found the document signifies an important shift in the way the church thinks about moral theology. “We invited to think about pastoral discernment in a way that we’re not just looking at rules,” she said.

At the same time, the pope is calling the church to be patient in how the exhortation is lived out or implemented in parishes, Bennett explained.

“He’s calling us to be patient with families … that we’re all important,” she said.

While Bennett said that Pope Francis’ immediate predecessors held up an ideal of family, the pontiff is calling the church to recognize that image, but to realize “that we’re not going to meet that ideal.”

Father Paul Check, executive director of Courage International, which provides support for people who experience same-sex attraction, said the pope is calling the church to recognize the value of each person first.
“It’s only by understanding who people are and who they are created to be by Christ that we can best accompany them,” he told CNS.

He also said Pope Francis’ citation of “Humanae Vitae” (“On Human Life”), which affirmed Catholic moral teaching against artificial contraception, is important to note because it continues to uphold long-standing church teaching.

Meanwhile, Cardinal Donald W. Wuerl of Washington, a member of both synods, said that with the huge number of references in the document to the two synods, “it’s clear that Pope Francis is trying to insert in the mainstream of Catholic theological thought and tradition the expressions of the challenges that the bishops say they are facing and what the bishops brought to this whole discussion.”

“I don’t find anything surprising” in the document, he told CNS in Rome during a break from meetings, “but I welcome its welcoming tone addressed to everyone. He’s saying: ‘This is the faith of the church. Yes, it’s difficult to live. Yes, we know we don’t all live it as fully as we should. But we are still all part of God’s family, God loves us and we have to be making our way together.”

Recognizing the complex variety of reasons why some people cannot and do not fully live up to church teaching on marriage and family life, Pope Francis provides no new rules for dealing with those situations. Cardinal Wuerl said Catholic theology and pastoral tradition “never had a one-size-fits all. The idea is that there is an ideal to which we are called, a level of perfection to which we are called — ‘Be perfect as your heavenly Father is perfect.’ How do that? That’s the one size that fits all, but along the way the church has always said the good pastor goes out in search of the lost sheep and surely that lost sheep is not someone who is following to perfection” the Christian ideal.

“It’s a beautiful apostolic exhortation because it doesn’t say, ‘Here are the answers to everything.'”

On the situation of divorced and civilly remarried Catholics, the document “starts with this beautiful reminder, ‘You’re still part of the family.'”

The document, he said, invites the divorced and civilly remarried to acknowledge church teaching on the indissolubility of marriage and to honestly examine their situation and discover how they can grow closer to Christ.

“I don’t see anything in the document that changes much of what we’re already doing in pastoral practice and that is you meet with people, you try to help them address their lived situation,” he said. “We’re not changing anything (in church teaching), but we’re not saying, ‘because you’re not perfect, this is no longer your home.'”

Contributing to this story was Cindy Wooden in Rome.