Other RFRA debates quieter, but history of laws has been roller coaster 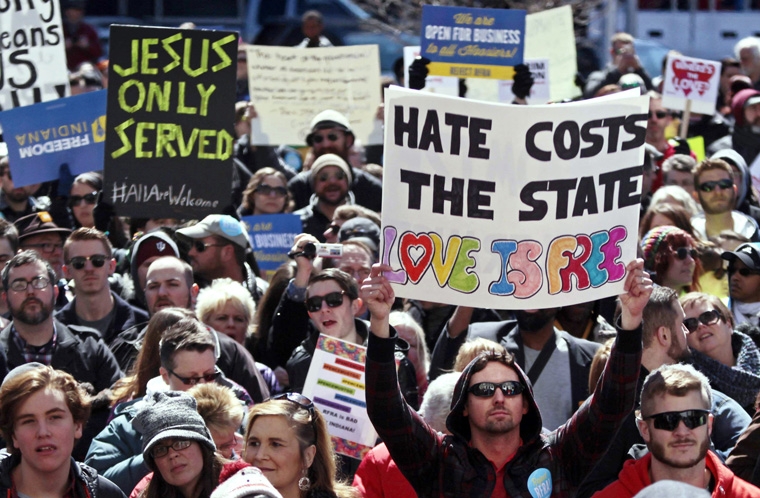 WASHINGTON (CNS) — It started with hallucinogenic peyote and a couple of guys in Oregon who were fired after they used it in a religious ritual.

Over the course of 25 years, the U.S. debate over religious rights moved from there to the current social and political uproar about Indiana’s Religious Freedom Restoration Act [RFRA] and whether it would give legal cover to those who might discriminate on the basis of sexual orientation.

Within hours of Indiana Gov. Mike Pence signing a state version of the Religious Freedom Restoration Act March 26, critics slammed the legislation as going further than the federal version of the same law does and said it would enable individuals and businesses to claim a religious right to discriminate in ways not foreseen in other versions. Highly publicized protests and boycotts of Indiana and Indiana-based businesses were launched.

The criticism, notably from gay rights activists and prominent Indiana business leaders who said the law would hurt their and the state’s financial bottom lines, led Pence to ask Indiana’s Legislature for a fix. Likewise, Arkansas Gov. Asa Hutchinson asked legislators to rework a RFRA bill that had already reached his desk. On April 2, a week after the Indiana bill was signed, both governors signed new RFRA legislation, rewritten to more closely mirror the federal law.

Some supporters of the original Indiana bill said the new version was unnecessary and might, in fact, “be a green light for driving religious people out of business,” as Mark Rienzi, senior counsel of the Becket Fund for Religious Liberty, put it. But the revision satisfied the critics, some of whom backed down quickly on their boycott calls.

The current focal point of controversy about RFRA laws is a far cry from what was on the minds of those who worked together across philosophical, political and faith differences to craft the original Religious Freedom Restoration Act in the early 1990s.

In fact, the uproar over Indiana’s RFRA is but the latest highly charged debate over religious rights stemming from one Supreme Court ruling. The earlier tussles were more of the policy-wonk variety, however, played out in Washington news conferences and over negotiating tables, rather than across the Internet, in Facebook memes and Yelp reviews.

It all began in April 1990, when the Supreme Court in Employment Division, Department of Human Resources of Oregon v. Smith, ruled that Alfred Smith and Galen Black were not constitutionally protected from being fired from the drug rehabilitation clinic where they worked over having used peyote in a ritual of the Native American Church.

In that 6-3 ruling written by Justice Antonin Scalia, the majority said, “We have never held that an individual’s religious beliefs excuse him from compliance with an otherwise valid law prohibiting conduct that the state is free to regulate.’’

Lower courts ruled that Smith and Black had been unfairly denied unemployment benefits and that the state’s ban on the use of peyote in religious ceremonies violated First Amendment religious rights protections.

Scalia’s ruling said the First Amendment protects religious beliefs from government regulation, but that laws may legitimately interfere with religious practices. He cited as an example an 1879 ruling that upheld bans on the then-common practice of polygamy among members of the Church of Jesus Christ of Latter-day Saints, or Mormons.

Within weeks in 1990, religious leaders were testifying before Congress about the need to pass a law that fixed what was seen as the Supreme Court’s undermining of the prevailing legal status of religious rights. The first few versions of the Religious Freedom Restoration Act failed to get out of Congress, as supporters of some sort of a bill disagreed vehemently about whether the proposals on the table would actually cause more harm.

The U.S. Catholic Conference, as the U.S. Conference of Catholic Bishops was then known, argued that the first RFRA would “pit religious groups and individuals against one another in disputes over a variety of social and educational programs as well as tax-exempt status.”

Mark Chopko, then-general counsel for the bishops’ conference, said in testimony to Congress that the bill “was intended to include religiously based abortion claims,” a point acknowledged by those involved in drafting the bill.

It took until 1993 for a carefully negotiated version of RFRA to be passed by Congress and signed into law by President Bill Clinton. Groups with as little in common philosophically as the National Association of Evangelicals and People for the American Way hailed its passage.

Then the Supreme Court weighed in. In 1997 in one of the first cases to reach the court that tested RFRA, the court ruled against the Texas Catholic church that had sought protection under RFRA from a local historic preservation ordinance that blocked the parish’s plan to tear down an old church to expand worship space.

The ruling struck down RFRA as it applies to all entities but the federal government. In response, states began passing versions of RFRA that would apply to state and local governments.

Those laws and how they were applied had generally attracted little national attention until the Supreme Court based its March 2014 ruling in Burwell v. Hobby Lobby in part on the federal RFRA. In that 5-4 ruling, the court said Hobby Lobby and Conestoga Wood Specialties need not comply with a federal mandate to include a full range of contraceptives in employee health insurance. Both companies’ owners are Christians who had objected to having to cover contraception in the government’s requirement in the Affordable Care Act.

The court said the federal government could have chosen ways to provide uniform access to contraceptives that were less of an infringement on religious rights. It said under RFRA, such “closely held” companies can assert religious views that protect them from the mandate.

By the time Indiana’s Legislature took up its version of RFRA this year, those concerned about a whole range of issues — notably access to services related to weddings for same-sex couples — had begun to consider what types of claims might be made under the protection of RFRA laws. Indiana’s original version of RFRA, for instance, broadened the definition of when it would apply to include disputes that do not involve any government entity.

The fact that Indiana and Arkansas reverted to the language of the federal RFRA may not signal an end to battles over the law. In an “amicus” or friend-of-the-court brief to the Supreme Court in the Hobby Lobby case, 19 members of Congress who supported the 1993 law said RFRA has been interpreted in ways they “could not have anticipated and did not intend.”

Yet another round over RFRA in Congress may not be far down the road.