Parishioners of Christ the Good Shepherd will write next chapter of the Church in Oswego, pastor says at parish’s first weekend liturgy 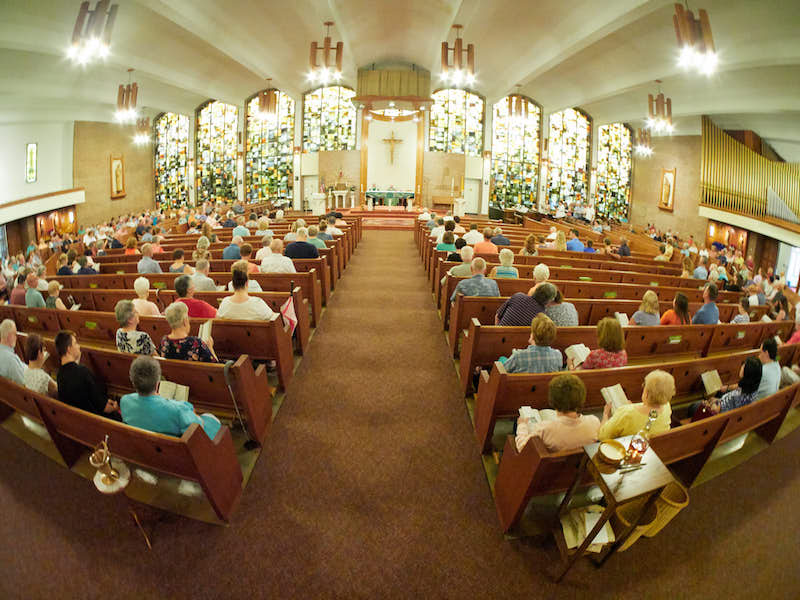 Members of Oswego’s newly formed Christ the Good Shepherd Parish were urged to help create the future of their faith community July 6 as they gathered to celebrate the parish’s first weekend liturgy.

“And so we begin this next chapter,” pastor Father John Canorro said in his homily. “That’s what it is. It’s not an end… it’s not even a beginning. We’ve come to a new chapter of our Church and it’s going to be up to us to write the story.”

Christ the Good Shepherd Parish was formed July 1 through the merger of four Oswego parishes: St. Joseph, St. Mary of the Assumption, St. Paul, and St. Stephen the King. Oswego’s pastoral leaders announced in June 2018 the parishes would begin a process to form one faith community that worships on one church campus. Christ the Good Shepherd was selected as the community’s patron in August 2018 and St. Paul Church as its worship site in May 2019. Many have since called for a reversal of the decision on the worship site and for the preservation of St. Mary’s parish and church. The individual parishes celebrated their final Masses June 29 and 30.

About 300 people filled the pews for the 4:30 p.m. Saturday Mass — far more than the usual 70 to 100 who would typically attend the Saturday afternoon Mass at St. Paul’s, according to Deacon Phil Kehoe. 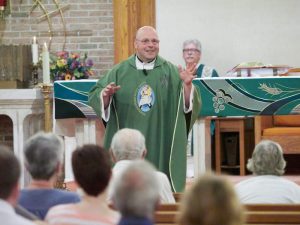 For many, the Mass provided an introduction to the parish’s new pastor, who began his pastorate July 1. Fittingly, Father Canorro wore a green vestment featuring the logo from the 2015-16 Year of Mercy — an image of Christ the Good Shepherd. He told the Sun he chose to wear it as he began his time at Christ the Good Shepherd because he would strive to be a priest of mercy.

Father Canorro started his homily with a simple hello, an earnest smile, and some insight on the experience he brings to his new post: In his 18 years as a priest, Father Canorro has served as parochial vicar of Holy Cross Church in DeWitt, as a faculty member at Bishop Grimes Jr./Sr. High School, and for two years as pastor of St. Rose of Lima Church in North Syracuse. From 2004 to 2017, he served as pastor of a number of parishes in the Northern Region of the diocese: St. Mary’s in Mexico, St. Anne’s in Parish, Christ Our Light in Pulaski, and Holy Trinity in Fulton. In the course of those 12 years, he led the faith communities through the closing of St. Anne’s and the linkage of St. Mary’s and Christ Our Light.

“And so I’ve experienced it,” Father Carnorro said. “The fact that I have some friends here from those places — it lets me know that I did okay.”

“As we begin this journey, know that I’m with you 100 percent,” he continued. “I will do all that I can to make the faith alive for you, to share my story, to share my experiences, my reading of scripture, my love of Jesus, in the hopes that it will take root in you.”

Father Canorro offered another possible reason for his appointment to the parish. “Do you know what my blood type is?” he asked. “B-positive.” To laughter from the congregation, he said, “I am positive and you will see a smile on my face and a twinkle in my eye pretty much all the time. And that’s what I know the bishop is hoping is contagious for all of you.”

Acknowledging that the faith community will have its hardships and struggles, Father Canorro said he would find the positive and encouraged others to do the same. 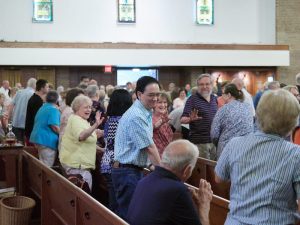 “I am positive that I will make you more aware of the presence of God in you and in your brothers and sisters — and in that we will build up our Church, we will make Christ the Good Shepherd a place where we can find God, where we can be nourished and we can all proclaim the Kingdom of God is at hand,” Father Canorro concluded, drawing applause from the congregation.

Joan Dehm, a longtime parishioner of St. Mary whose grandfather helped to carry the fieldstone from which the church is built, gave the liturgy high marks. “I was absolutely thrilled with today and I’m thrilled with Father Canorro. He did a wonderful job,” she said after Mass.

Deacon Kehoe also praised the powerful homily, as well as the music, which was provided by members of the choir from St. Mary. “That music, that level of participation” was more like what is experienced at a Christmas or Easter liturgy, he said. “Just — wow.”

But the most exciting element of the celebration, he noted, was the number of people who came to be a part of it. 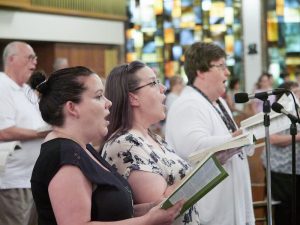 Ordained 15 years ago, Deacon Kehoe served for many of those years in his home parish of St. Mary. He began ministering at St. Paul’s a couple of years ago and will continue to serve at Christ the Good Shepherd. “I just didn’t know where we would be,” he said, referring to the process of selecting the worship site for the new parish. “It was hard for me, like it was everybody else, because all these parishes — St. Stephen’s, St. Joseph’s, St. Paul’s, and St. Mary’s — are all beautiful… I’ve had the great privilege of being a deacon at every one of them at one time or another and I’ve gotten to meet the people. So my joy, my excitement was knowing that this day was coming and that we would all be together.”

Deacon Kehoe also looked to the future: “A hundred years from now, the people who are filling this church — and I’m sure this church will be filled 100 years from now — people will talk about these other churches that were here and how those churches were the faith.” He likened the new parish to America, noting how the Italian, Polish, Irish, and French heritages of Oswego’s original parishes are now blended into one faith community. “So now that’s what this church is — we’re a blend of everybody.”