OSWEGO — St. Paul’s Church will become Christ the Good Shepherd Parish and the home of Oswego’s Catholic Community on July 1.

The decision comes about 11 months after the Oswego parishes of St. Joseph, St. Stephen, St. Mary, and St. Paul announced they would begin a process to form one faith community that worships on one church campus. The community selected Christ the Good Shepherd as its patron in August 2018.

“Yesterday, following an extensive locally based process, I received a consensus based recommendation from the Oswego community that St. Paul’s Church should be the home of Christ the Good Shepherd Parish. With this letter, I affirm the consensus recommendation,” Bishop Robert J. Cunningham wrote in a letter dated May 11, which was mailed to parishioners and provided to the Catholic Sun. 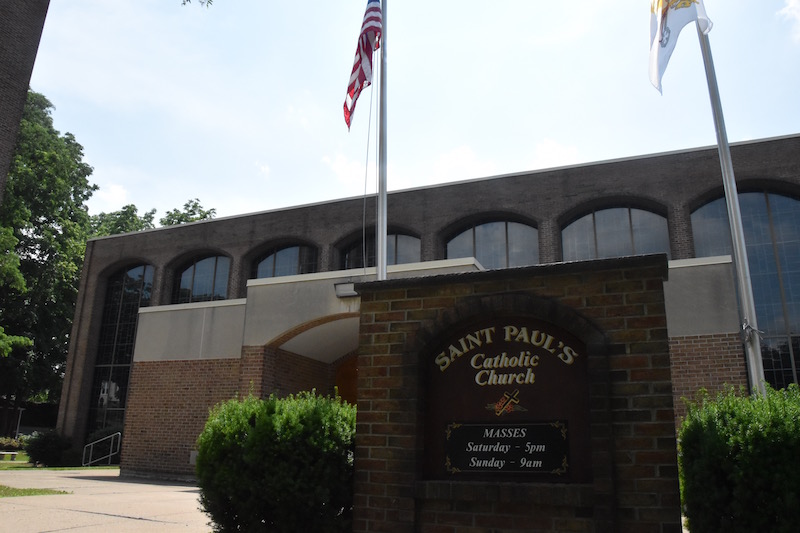 St. Paul’s Church will become Christ the Good Shepherd Parish and the home of Oswego’s Catholic Community on July 1. St. Paul’s is located at 134 East 5th St., on the east side of the Oswego River. (Sun photo | Katherine Long)

Catholic communities throughout the Northeast are grappling with challenges including an aging and declining population, economic and industry shifts, limited financial resources, aging facilities, fewer priests and religious available for ministry, and decreasing participation in Masses and the sacraments.

Oswego has not been immune to these challenges. Figures provided by the community reported registered parishioners in 1910 numbered 12,772; a calculation of Mass attendees in October 2018 totaled 1,038, according to Msgr. James Lang, Vicar for Parishes.

The bishop’s letter explains that in 2017, “the pastoral leadership and parish finance councils reported that the financial condition of the Oswego parishes was unsustainable and that restructuring and unification would be required. 2020 was projected as ‘the line in the sand.’ A full analysis was provided of each parish. This overview was shared with the pastoral leaders, the trustees, and each of their parish finance and pastoral councils. Each group in their turn affirmed that the need for change is urgent.”

The Parish Facilities and Real Estate Committee was tasked with engaging architecture and real estate professionals to evaluate all four parish properties.

“The choice of location involved four parish campuses each of which has the challenges of aging structures and equipment, city parking issues, ADA [Americans with Disabilities Act] standards, and the challenge of finances,” Bishop Cunningham wrote in the letter. “Each parish served Oswego well, even when each parish served a much larger community,” however “none of the facilities was an entirely turn-key venue.”

St. Paul’s Church is located at 134 East 5th St., on the east side of the Oswego River. The bishop’s letter outlines several plusses for the site, including the capacity — the church seats 900 — and relatively easy adaptability of the worship space. The community, program, and work space afforded by the parish’s Priory Hall and rectory, as well as by Trinity Catholic School, located about a block away from the parish, is also noted. Trinity’s connection to St. Paul’s is also underlined in the letter, as is the fact that St. Paul’s Parish, established in 1830, is the oldest in Oswego. (The current St. Paul’s church building was dedicated in 1969.)

The “unification of the parishes of Oswego will begin on July 1 and will be celebrated at Masses on July 6-7,” according to the letter, and the “plans for celebrating the legacies of St. Joseph, St. Mary, St. Paul, and St. Stephen the King will be shared with you as those celebrations are planned.”

The “process to establish new uses for the legacy churches will begin immediately,” the letter says. Deacon Alvaro confirmed the goal is to sell or repurpose the properties.

Until those new uses are determined, weddings, funerals, events, and daily Masses may take place at each site and each location “will have apportioned specific roles in the ministry of the parish,” according to the letter.

Elements from each church will be incorporated as integral parts of Christ the Good Shepherd.

The question of who will serve Christ the Good Shepherd as pastor is yet to be answered. The position has been advertised to all priests of the diocese; applicants will be reviewed by the priest personnel committee soon, according to Msgr. Lang. The new pastor’s term will begin July 1; Father Hogan, Father Baccaro, and Deacon Alvaro will hold their current assignments until that day, Msgr. Lang said. It was announced last week that Father Hogan has been appointed pastor of St. John the Evangelist Church in Camden effective July 1.

Vision for the future

Deacon Alvaro said reaching the decision on the site for the home of Christ the Good Shepherd was difficult, painful, and “nearly impossible” for those involved in the process.

With the decision made, however, “that allows us now to go forward with a vision of being more alive, spreading the Good News of Jesus Christ.”

The Sun will continue to provide ongoing coverage of this process and the faithful moving it forward. Share your thoughts and tell us what you’d like to know more about — send us an email at news@thecatholicsun.com.

This story has been corrected to reflect that 134 East 5th St. is the physical address of St. Paul’s Church. 50 East Mohawk St. is the mailing address.