Looking back and ahead, final parish Masses celebrated in Oswego 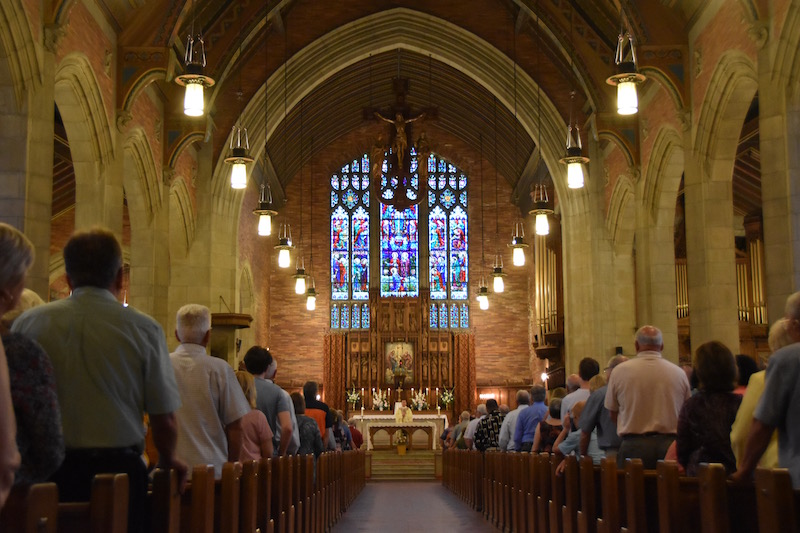 Oswego’s Catholics were encouraged to both celebrate their history and look toward their future June 30 as the faith communities of St. Joseph, St. Mary of the Assumption, St. Paul, and St. Stephen the King celebrated their last Masses as individual parishes.

Pastoral leaders of the Oswego Catholic community announced in June 2018 the parishes would begin a process to form one faith community that worships on one church campus. Christ the Good Shepherd was selected as the community’s patron in August 2018 and St. Paul Church as its worship site in May 2019. The parish will celebrate its first weekend liturgies July 6 and 7.

Many in Oswego have called for a reversal of the decision on the worship site in favor of St. Mary. A group of Oswegonians advocating for the preservation of St. Mary — both the parish and the physical structure — convened at a community meeting in June, during which signatures for a petition to the diocese were gathered and plans for fundraising and further preservation efforts were discussed.

Parishioners from across the parishes are also anxious to see how ministries will be combined at Christ the Good Shepherd, what will become of the various church properties, and how each community’s traditions and customs will be integrated.

The weekend was also the parishes’ last with their longtime pastoral leaders. Father John Hogan, pastor of St. Mary’s, began his pastorate of St. John in Camden July 1; Father Guy Baccaro, pastor of St. Paul, began as administrator of Our Lady of Perpetual Help Church in Minetto and Our Lady of the Rosary Mission in Hannibal the same day; and Deacon Nick Alvaro, administrator of St. Joseph and St. Stephen, will begin his term as temporary administrator of the linked parishes of St. Matthew in East Syracuse, St. Mary of the Assumption in Minoa, and St. Francis of Assisi in Bridgeport August 1. Father John Canorro began his pastorate of Christ the Good Shepherd Parish July 1.

All of the emotions that come with the merging of beloved parishes and saying goodbye to pastoral leaders were on display in the Oswego churches on Sunday, with parishioners blotting tears, smiling over parish history displays, and wistfully taking photos and videos. 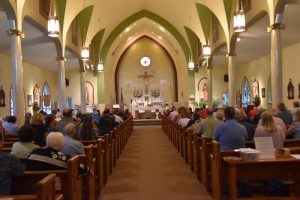 At St. Stephen’s Church, Deacon Alvaro told parishioners in his homily that the day was a “celebration of what was passed to us” and of those who had come before to “give us the strength and courage to go forward” and “to carry the mantle into the next generations.”

Deacon Alvaro offered a quote from Trappist monk and writer Thomas Merton: “You do not need to know precisely what is happening, or exactly where it is all going. What you need is to recognize the possibilities and challenges offered by the present moment, and to embrace them with courage, faith, and hope.”

Acknowledging that “there is a little bit that dies with us today,” Deacon Alvaro told the congregation that “the best is yet to come, the possibilities that are there are endless, the vision of what there is to come is endless.”

Parishioner Pat Harrington helped to set up the parish social following Mass. She belongs to six generations of family members who have received sacraments at St. Stephen’s, where she herself was married in 1974.

Harrington said she was feeling sad that morning and recalled with some laughter memories from her years in the parish: a former pastor coming out of the confessional to tell her and other children to be quiet, her daughter remembering bringing a chair to the parish hall for summer school with the sisters who taught there. “We’ve had a lot of happy times,” she said. 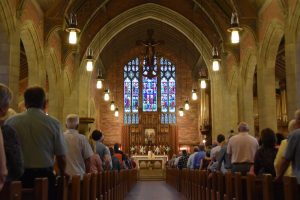 At St. Mary’s, Father Hogan shared with those filling the church’s pews highlights of the parish’s history, stretching back to 1848.

“As we gather together today in this church, as the parish community dedicated to St. Mary of the Assumption, I’m sure that many of us come here with mixed feelings. We may be feeling sad, and angry, a little confused, and are experiencing a great sense of loss. We are all grieving in some way,” he said in his homily. “And why wouldn’t we? St. Mary’s Parish has a long history and has played a very significant role in… shaping the city of Oswego, in our lives, and in the lives of the thousands of people who have come before us.”

Father Hogan said that “I know that many of you are struggling with what is happening, but, you know, with each new phase of life, if we are willing and able to leave things behind and move forward, we achieve a new sense of freedom and a new sense of purpose. It really can be exciting and the possibilities are endless.”

After the choir offered a stirring rendition of “The Bells of St. Mary’s” to close the liturgy, St. Mary’s sacristan Robert McKinstry reflected on his time in the parish, which dates back to his baptism. He said he has been on board with the parish consolidation but understands those who aren’t. He’ll be at Christ the Good Shepherd for Mass this coming weekend, likely both Saturday and Sunday, he said.

As for what makes St. Mary’s a special community and what it will bring to the new parish, McKinstry said, “I think the people are what make it special…. Those folks that choose to go there [to the new parish] I think will do what they do — they’ll practice their religion and they will do everything they can to make the new organization go well.” 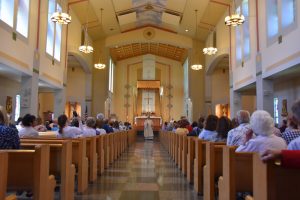 Following Mass at St. Joseph’s — during which twins were baptized into the faith — parishioner Ann Conzone said it was “a sad day for St. Joe’s” and admitted she wiped away a couple of tears.

Her husband, Jim Conzone, has been a parishioner of St. Joseph’s all his life, and a longtime fixture at the parish’s summer festival — he started making the pizzas at 15 and transitioned to manning the chicken barbecue in later years. Jim, a cantor and member of the choir at St. Joe’s, will be among the choir members singing at Christ the Good Shepherd this coming weekend.

The couple agreed that St. Joe’s is special because of its focus on family and its friendliness — traits they hope to bring to the new parish community.

“I’m just hoping that everybody comes together,” Jim said. “I know this is a building and a beautiful building —”

“But it’s just a building,” Ann said. “We have to follow our faith.”