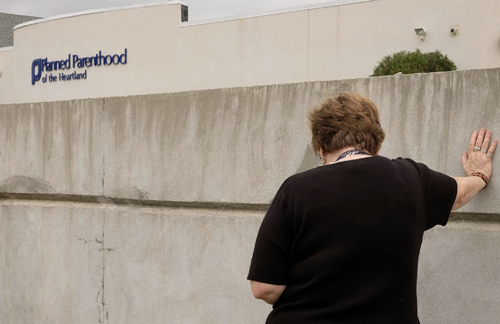 NEW YORK (CNS) — The president of the Planned Parenthood Federation of America said Oct. 13 that the organization’s clinics will no longer accept reimbursement for fetal tissue procured in abortions and provided to researchers.

Cecile Richards said the decision was made “to completely debunk” a series of 11 videos released in recent weeks by the Center for Medical Progress showing physicians and others associated with Planned Parenthood describing the harvesting of fetal tissue and body parts during abortions at their clinics.

Also discussed in the videos, which were filmed undercover, are what researchers re charged for the tissue and parts.

Planned Parenthood receives more than $500 million of its $1.3 billion annual budget from federal and state programs.

In reaction to Richards’ decision, Father Frank Pavone, national director of Priests for Life, called it “meaningless” and said it “does not settle any controversy.”

“Nor does it answer any of the questions that the ongoing investigations into Planned Parenthood’s actions have raised,” he said in a statement.

Richards made the announcement in a letter to Dr. Francis Collins, director of the National Institutes of Health, which is just outside of Washington. She said the money her organization’s clinics have received for providing fetal tissue was “reimbursement for its reasonable expenses” related to handling the tissue and that receiving such payments are “fully permitted” by law.

The National Institutes of Health Revitalization Act, signed in 1993, allows for “reasonable payments associated with the transportation, implantation, processing, preservation, quality control, or storage of human fetal tissue.” The law does not define “reasonable payments” or limit how much can be charged.

Pro-life groups charge that Planned Parenthood is violating the Uniform Anatomical Gift Act, which makes it a federal crime to buy or sell fetal tissue but does allows companies to collect fees related to the handling and processing of the tissue.

In two of the videos, top Planned Parenthood physicians describe how abortions are carried out to best salvage fetal tissue and organs for researchers and described a range of prices paid for different body parts.

Richards and other top Planned Parenthood officials claim the videos were edited to manipulate the interviews and any mention of money for tissue and body parts is related to customary handling fees. The Center for Medical Progress stands by its videos.

Richards called the center and other pro-life organizations “extremists” whose attacks “have nothing to do with our fetal tissue donation compliance process,” because their goal is “to ban abortion in the U.S. and block women from getting any health care from Planned Parenthood.”

“Today, we’re taking their smokescreen away and pushing forward with our important work on behalf of millions of women, men, and young people,” she said and described her organization’s role in fetal tissue as “very limited.”

“The participation by a handful of our affiliates in supporting women who choose to make fetal tissue donation has always been about nothing other than honoring the desire of those women and contributing to life-saving research and cures,” she said.

Planned Parenthood also dispenses birth control and does some women’s health screenings, services its supporters say are especially needed by low-income women who otherwise could not afford them.

“The most recent revelations about Planned Parenthood’s willingness to traffic in fetal tissue from abortions, and to alter abortion methods not for any reason related to women’s health but to obtain more ‘intact’ organs, is the latest demonstration of a callousness toward women and their unborn children that is shocking to many Americans,” he said.

He urged senators to take the federal money that goes to the Planned Parenthood and instead fund women’s health care providers that do not promote abortion.