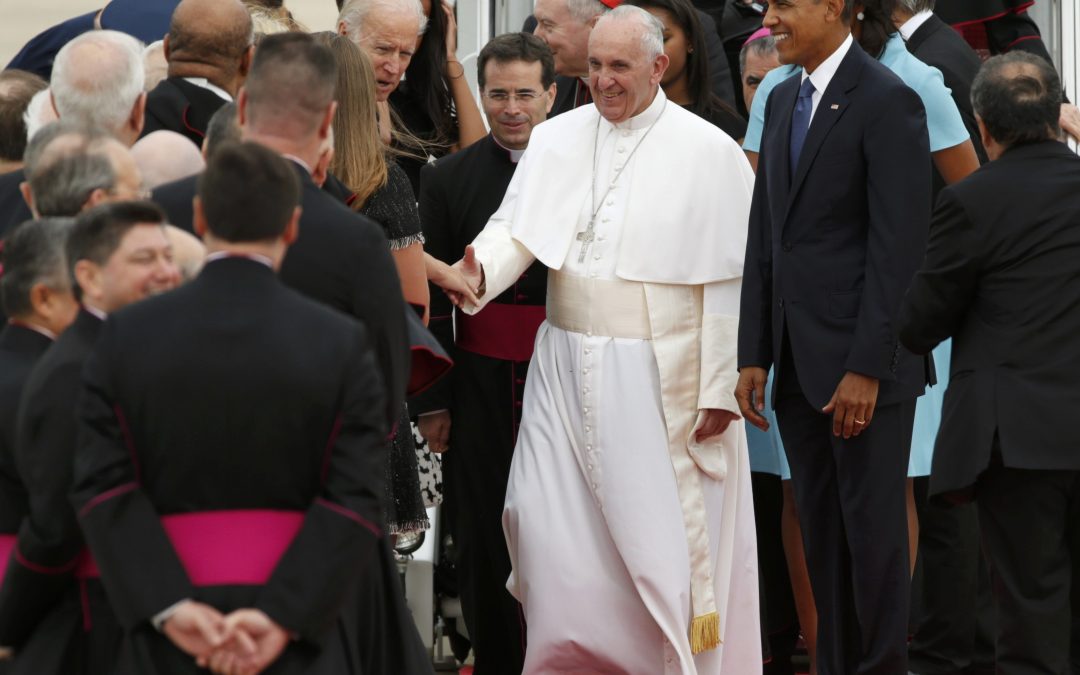 JOINT BASE ANDREWS, Md. (CNS) — Even the red carpet had a rehearsal for the pope’s arrival.

As Washington waited for Pope Francis to arrive Sept. 22, the media took their places on the riser at Joint Base Andrews, an armed forces color guard practiced their welcome for the pope and the red carpet got a test roll-out.

For a couple of hours before the pope’s plane touched down, as the military prepped and before Catholic officials, political figures and other dignitaries arrived, the bleachers along the tarmac where the pope would deplane began to fill.

The crowd of about 500 included different groups from around the Archdiocese of Washington, including students from 19 Catholic elementary schools and five high schools, women religious and members of the Air Force and their families.

The band from DeMatha Catholic High School, an all-boys school in the Washington suburb of Hyattsville, Maryland, provided the musical entertainment. The band played pop tunes, such as “Louie, Louie” by the Kingsmen, Pharrell William’s “Happy” and music by Earth Wind and Fire.

Before the music started, DeMatha junior J.R. Ayers, a clarinet player, told Catholic News Service it was “awesome and an honor” for his school to be chosen to play for the pope’s U.S. arrival.

Playing at the Air Force base for a world leader had special significance for Ayers, because his father, a trumpet and trombone player, is in the Army band that plays for U.S. President Barack Obama when he leaves the country on official business and when he returns.

“I really like his style. He’s a bit different, but I like different,” the young Ayers, who is from Severn, Maryland, said of the pope.

“Everybody is very glad to be here” and to have DeMatha selected, said Egan O’Brien, a flute player and senior from Annapolis, Maryland.

His impression of the pope? He “is very, very good with people. He’s called the ‘people’s pope.'”

Sophomore Waverly Harris, of Capitol Heights, Maryland, who plays the drums and also is on the football team, said DeMatha being chosen to play was “a special feeling and a testament to our [school’s] work ethic.” He said the band’s concerts usually draw an average of 100 people. “Playing for one of the biggest men in the world takes everything to a whole new level.”

Dave Gardiner, DeMatha’s dean, said the school and its band’s participation in the welcome for the pontiff “really reflects and supports the faith of the school and brings the school and community closer.” Gardiner added the students had worked “very hard to be prepared” for their performance.

The steady breeze and overcast skies that greeted Pope Francis’ arrival must have been a welcome change from the sweltering heat in Cuba for the pope and the Vatican press corps.

A few drops of rain fell as the pope disembarked from the Alitalia plane and was greeted by the president, first lady Michelle Obama and their daughters, other local dignitaries and U.S. Catholic leaders, including Archbishop Joseph E. Kurtz of Louisville, Kentucky, president of the U.S. Conference of Catholic Bishops, Washington Cardinal Donald W. Wuerl, and USCCB officials. Ken Hackett, U.S. Ambassador to the Vatican, also was on hand.

After four Catholic school children presented the pope with flowers, the papal entourage and U.S. officials walked into the Joint Base Andrews’ Distinguished Visitor Lounge.

As the group disappeared into that building, the black SUVs for the motorcade that would take the pope to theapostolic nunciature in northwest Washington for the evening formed a line on the tarmac. The lead car was a black Fiat 500L sedan, bearing the license plate “SCV 1,” the initials for Vatican City State in Italian.

In short order, members of the papal entourage came back outside and took their places in the cars with the pope entering the Fiat. Then the motorcade departed.

The pope was gone almost as quickly as he had arrived.

As the crowd dispersed to head back to board the buses that brought them, Molly Fisette of St. Charles, Maryland, told CNS the experience of seeing the pope was “incredible.”

“We’re ecstatic,” she said, about her family — husband Russ, who is retired from the Air Force, and their daughter Monet, 10, and son Lex, 5.

“I like the pope and how open and humble he is. He’s coming here to learn more about America,” Molly told CNS. As Catholics, she said, her family really likes that the pope is trying to get people back to the church and show the world the church is “accepting and very welcoming.”