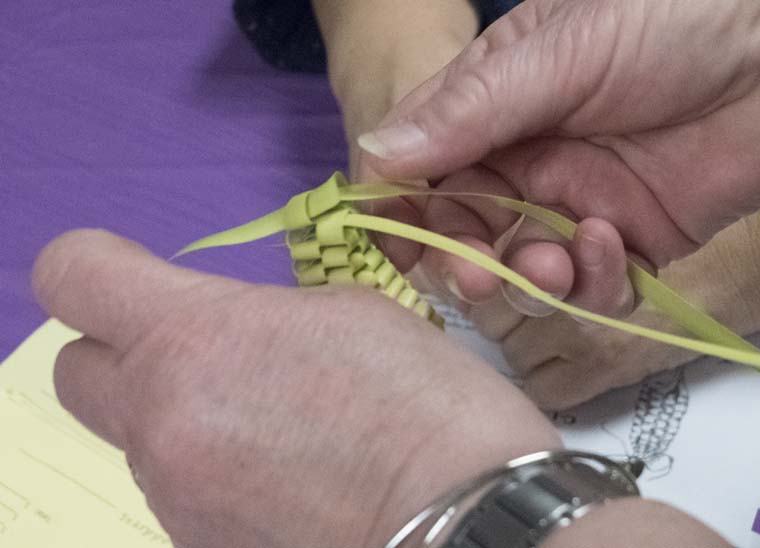 UTICA — It was B.Y.O.B. at Holy Trinity Church March 20: Bring Your Own Butter. At a Polish cultural event in the basement of the church following Palm Sunday Mass, guests chose among activities including sculpting butter lambs, decorating pisanki eggs or weaving creations from palms.

The event was offered by the Kopernik Memorial Association of Central New York. The group promotes Polish cultural heritage through education, art, music and even contemporary film, explained John Ossowski, cultural director of the organization and the Polish Cultural Center. New members and networking with groups such as the Rome Polish Home and others in Buffalo, Seattle and Michigan have revitalized efforts, he said. He noted that this is the organization’s biggest event of the year.

“In the age of chocolate Easter bunnies, this gives everyone a demonstration of the total Polish religious spirit of Easter,” he said, “and gives the kids an idea of what Easter is really all about.”

Eight-year-old Whitesboro resident Gianna Raspante was visiting with Scott Holbrook, a St. Paul’s Church parishioner. Gianna said, “I go to church, but I don’t always like it.” Yet, later in the conversation, she said, “I didn’t know what to expect here, but I like this.”

It is through this sense of community and the activities that organizers like Mary Currie, a parishioner at St. Leo’s-St. Ann’s of Holland Patent, hopes to share the deeper meaning of these Polish traditions and what they represent for the Catholic faith. Currie has spent a lot of time reconnecting with her heritage through the Polish folk arts. Learning about the Christian symbolism of these handicrafts has breathed new life into her faith and she is eager to share it with others.

Currie guided three senior citizens and one child in working with palm fronds. “Now, don’t let go… This one goes North, the opposite goes South… Watch it, honey, so you don’t poke that lady in the eye with it,” she advised with deft hands and a watchful gaze.

Currie began her cultural and spiritual journey with a pilgrimage to Poland three years ago and learned Polish crafts locally from Adela Nowak. Under Nowak’s mentorship, Currie, Valerie Elacqua, of Utica, and Michelle Krul, of Forestport, among others, have maintained Nowak’s legacy.

Recently, Currie has been in touch with Father Krysa Czeslaw, of St. Casmir Church in Buffalo. She said Father Czeslaw has been a wealth of information as a skilled folk art practitioner and an expert in ritualized Polish customs. Currie was originally interested in wysinanki, an art involving cut paper.

“I asked Father Krysa, ‘How can I talk about my faith when I’m working with paper?’” she said. This is when she learned about the symbolism behind the images and the idea of sacred ritual, she said. “Father uses the symbolism to reach the true essence of the custom … I thought to myself, ‘Oh my gosh, this is the connection!’ Everything is symbolic to Easter and the Resurrection.”

The lamb made of butter symbolizes Christ, and the red ribbon around its neck symbolizes His blood, Currie explained. It is meant to be eaten on Easter. “In Poland, we don’t have the Easter bunny, but the lamb characterizes Easter,” she said.

Eggs are a common springtime symbol and also indicate faith in the Resurrection and hope. The decorations on the pisanki eggs can represent aspects of Christianity, according to learnpysanky.com.

At the March 20 event, Sadie Falcone, 12, of Rome, was working on a pisanki egg with her mother, Linda. They are neither Polish nor Holy Trinity parishioners, but have been coming to the event for as long as Sadie can remember. She still has some of the original eggs she decorated from her first Polish Palm Sunday event.

“I’m very artistic,” she said, “but I didn’t know there was symbolism behind everything.”

The mother-daughter pair, parishioners of St. Peter’s Parish in Rome, joked that they would be coming to the event every year even when Sadie grows up and is the one to bring her mom.

“By then, I’ll learn what all the symbols and traditions mean,” she said.