Pope: Anyone one who repents, desires God’s embrace can be saved 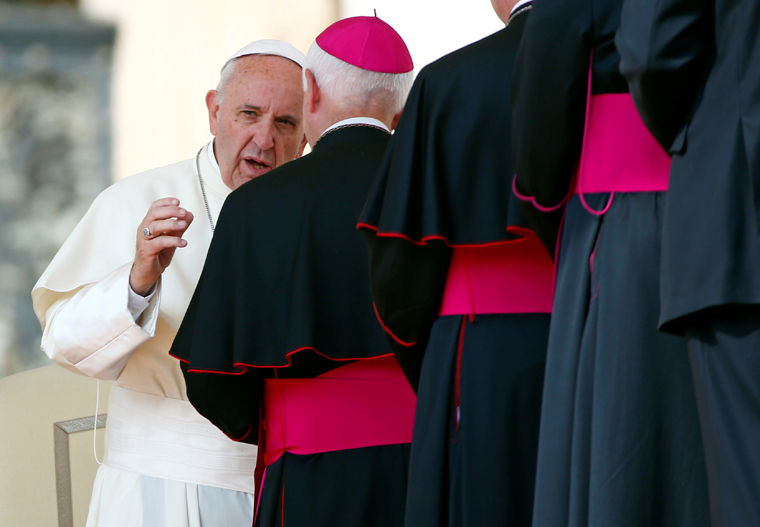 VATICAN CITY (CNS) — The church is not just for people who are good, who think they’re good or pretend to be good, it is for everyone, especially the bad because the church is mercy, Pope Francis said.

No one is excluded from God’s forgiveness, even the worst sinners, who only must draw near to Jesus with a repentant heart “and the desire to be embraced,” he said Sept. 28 at his weekly general audience.

In his continuing series of talks on mercy, the pope focused on St. Luke’s Gospel account of the crucifixion and its story of the “good thief.” Jesus was nailed to a cross between two criminals, was jeered at by the crowds, and still he begged God to forgive them because “they know not what they do.”

Not many understood how the Messiah could allow himself to be nailed to the cross and do nothing to try to save himself, the pope said. But “Jesus saved us by remaining on the cross. And all of us know that it is not easy to remain on the cross, our little everyday crosses.”

But upon that great cross and with great suffering, Jesus “stayed there and there he saved us, there he showed us his great omnipotence and there he forgave us,” the pope said.

The fact that he — an innocent man — died between two criminals attests to the fact that “God’s salvation can reach anyone in any condition, even the most negative and painful, he said. “God’s salvation is for everyone, no one is excluded,” but his mercy and pardon are there “above all for the bad because the church is mercy.”

God is always there offering himself, the pope said.

Pope Francis urged those who are suffering, especially those confined to a hospital bed, locked in a prison or trapped by war to gaze at the cross, “let the power of the Gospel penetrate your hearts and console you, give you hope and the deepest assurance that no one is excluded.”

The “good thief,” who recognized who Jesus was, admitted his own guilt and saw his earthly punishment as just, is the perfect role model of repentance and an excellent example of a Christian who trusts in God, the pope said.

He showed a profound respect and reverence for God; he was aware of God’s omnipotence and his infinite goodness, the pope said, and “it is this confident respect that helps make room for God and trust in his mercy even in the darkest night.”

That Jesus is there among the guilty, offering salvation, scandalizes the leaders, the pope said, but for the good thief, “it is the bedrock of his faith.”

Here “the unthinkable has happened — God loved me so much that he died on the cross for me.”

True, “he was a big thief, a sinner,” who stole from people his whole life, but in the end he was sorry and asked for forgiveness, which meant he also “succeeded in ‘stealing’ heaven. He was a very good thief,” the pope said with a smile.

The Lord’s passion finds its culmination in his words of pardon on the cross, the pope said, and reveals his mission — to save all sinners.

“On the cross, the final act confirms the realization of this saving plan” and underlines that from the very beginning Christ reveals himself as the “definitive and unique incarnation of the father’s love. Jesus is truly the face of the father’s mercy,” he said.