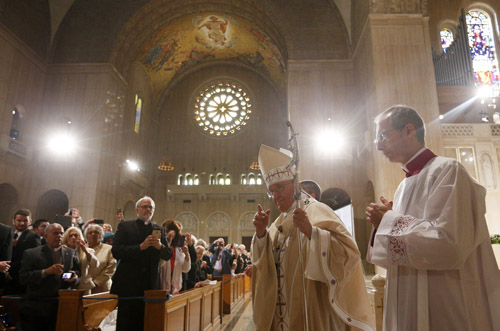 WASHINGTON (CNS) — Canonizing the 18th-century Spanish missionary, Blessed Junipero Serra, Pope Francis insisted a person’s faith is alive only when it is shared.

Celebrating a late afternoon Mass outside the Basilica of the National Shrine of the Immaculate Conception Sept. 23, the pope declared the holiness of St. Junipero, founder of a string of missions in California.

Some people had objected to the canonization — like the beatification of the Spaniard in 1988 — because of questions about how Father Serra treated the native peoples of California and about the impact of Spanish colonization on native peoples throughout the Americas.

Pope Francis mentioned the controversy only briefly, saying: “Junipero sought to defend the dignity of the native community, to protect it from those who had mistreated and abused it. Mistreatment and wrongs, which today still trouble us, especially because of the hurt which they cause in the lives of many people.”

Vincent Medina, who has questioned the wisdom of the canonization, read the first Scripture reading in the Chochenyo language of the Ohlone people of Northern California.

Before the formal proclamation of the missionary’s sainthood, a choir and the congregation chanted a litany invoking the intercession of Jesus, Mary, the apostles and a long list of saints, including other saints who lived and worked in the United States, such as St. Frances Cabrini, St. Elizabeth Ann Seton, St. John Neumann and St. Kateri Tekakwitha, the first American Indian to be canonized. The canonization of St. Junipero, however, was the first such ceremony to be celebrated in the United States rather than at the Vatican.

After the formal proclamation, Andrew Galvan, curator of Dolores Mission in San Francisco, brought a relic of St. Junipero up to a stand near the altar as a song was sung in Spanish accompanied by a drumbeat.

Catholics in the United States and throughout the world are indebted to St. Junipero and thousands of other witnesses who lived their faith and passed it on, the pope said in his homily.

St. Junipero “was excited about blazing trails, going forth to meet many people, learning and valuing their particular customs and ways of life,” Pope Francis said.

A missionary’s life is exciting and brings joy, he said, because it is not sedentary or turned in on itself. Sharing the Gospel is the way to keep experiencing the joy it brings and keeps the heart “from growing numb from being anesthetized.”

More than speaking about St. Junipero, Pope Francis spoke about keeping faith alive and joyful, calling on all Catholics to be missionaries.

“Mission is never the fruit of a perfectly planned program or a well-organized manual,” he told the crowd of about 25,000 people. “Mission is always the fruit of a life which knows what it is to be found and healed, encountered and forgiven.”

Pope Francis insisted that Jesus does not given Christians “a short list of who is, or is not, worthy of receiving his message, his presence.”

Instead, Jesus embraced people as they were, even those who were “dirty, unkept, broken,” he said. Jesus says to believers today, like yesterday, “Go out and embrace life as it is, and not as you think it should be.”

Before the Mass, Pope Francis made a short visit inside the basilica, where he briefly greeted families and men and women studying to be priests and sisters. They had waited inside for more than two hours.

Parents like Margarita and Carlos Ramos, who brought their 7-year-old son Samuel to Mass, were in the pews, sharing a prayer before all started, while Secret Service snipers stayed alert in several balconies.

“I like Pope Francis because he was born in Argentina; he is one of us. I would love to have the chance to be blessed by him. I´m telling everybody in my second grade class that I was sitting here the day he made Junipero Serra a saint.”

“It is a historic moment,” said Sister Maria Virgen Oyente of the Servants of the Lord and the Virgin of Matara. She was in the line to get inside the Basilica of the Immaculate Conception with a group of about 20 nuns. “We are very happy to be here. The line is long and is getting hot, but we are reading about Fray Junipero Serra, and that makes us feel better.”

“My expectations for today are very high,” said St. John Vianney College seminarian Gustavo Santos. “Imagine what it is to be in the same place with your pastor, the vicar of Christ on earth, I can’t even describe it with my own words.”

“I admire Pope Francis’ simplicity and mercy for the poor and vulnerable,” said Yoandy Gonzalez, born in Cienfuegos, Cuba, and currently attending St. John Seminary. “The pope teaches us all simple ways to truly live the Gospel as Christ every day.”

Contributing to this story was Constanza Morales.