Pope, Christian leaders condemn use of violence against Syria 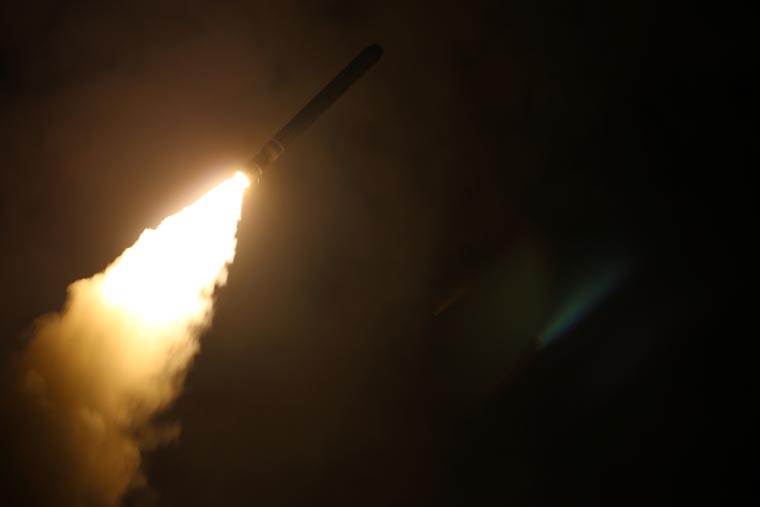 VATICAN CITY (CNS) — Sharply criticizing a failure to find nonviolent means of bringing peace to Syria and other parts of the world, Pope Francis appealed to world leaders to work for justice and peace.

“I am deeply disturbed by the current world situation, in which, despite the instruments available to international community, it struggles to agree on joint action in favor of peace in Syria and other regions of the world,” he said after praying the “Regina Coeli” with people gathered in St. Peter’s Square April 15.

“While I unceasingly pray for peace and invite all people of good will to keep doing the same, I appeal once again to all political leaders so that justice and peace may prevail,” he said.

The pope’s appeal came after the United States, France and the United Kingdom launched missiles on Syria April 13, targeting sites intended to weaken the nation’s chemical weapons capability. The missile strikes came one week after an alleged chemical attack in the Ghouta region, outside Damascus.

Russian Orthodox Patriarch Kirill of Moscow telephoned Pope Francis after the missile attack, he told reporters April 15 at his residence outside of Moscow.

“We shared the common concern about the situation in Syria, and we talked about how Christians should influence this situation to stop violence, war and so many tragic victims as we have seen in these days,” he said, according to AsiaNews.

The patriarchate launched an initiative to unite Christian leaders from the East and West to promote peace and prevent a humanitarian crisis in Syria, said Father Aleksandr Volkov, spokesman for the Russian patriarchate.

Christians “cannot be silent when things like those of these days are taking place in Syria,” Patriarch Kirill said.

“Each of them has expressed a willingness to continue consultations to find a way to stop the bloodshed,” he added.

The Syrian Catholic and Orthodox patriarchs of Syria also publicly condemned the “brutal aggression” of the U.S.-led allied missile attack and called upon all churches in the countries that participated to likewise condemn the attack and urge their governments to work toward international peace.

In a statement issued April 14 from the Syrian capital of Damascus — the patriarchal seats of their respective churches — the patriarchs said they “condemn and denounce the brutal aggression that took place this morning against our precious country Syria by the U.S.A., France and the U.K., under the allegations that the Syrian government has used chemical weapons.”

Referring to the April 14 air strikes, the Catholic and Orthodox patriarchs said the timing of “this unjustified aggression against Syria” undermines the work of the independent International Commission for Inquiry, which was about to carry out its investigation in Syria into the alleged chemical attack.

“The allegations of the U.S.A. and other countries that the Syrian army is using chemical weapons and that Syria is a country that owns and uses this kind of weapon, is a claim that is unjustified and unsupported by sufficient and clear evidence,” the Christian leaders said.

“This brutal aggression is a clear violation of the international laws and the U.N. Charter, because it is an unjustified assault on a sovereign country,” the patriarchs said of the April 14 air strikes, emphasizing that Syria is a member of the United Nations.

“It causes us great pain that this assault comes from powerful countries to which Syria did not cause any harm in any way,” they said.

The Syrian Catholic and Orthodox patriarchs warned that the “unjust aggression” of April 14 encourages terrorist organizations “and gives them momentum to continue in their terrorism.”

“This brutal aggression destroys the chances for a peaceful political solution and leads to escalation and more complications,” they said. The patriarchs urged the U.N. Security Council “to play its natural role in bringing peace rather than contribute to escalation of wars.”

“We call upon all churches in the countries that participated in the aggression to fulfill their Christian duties, according to the teachings of the Gospel, and condemn this aggression and to call their governments to commit to the protection of international peace,” the Syrian Catholic and Orthodox prelates said.

The Christian leaders commended the Syrian Arab Army, “which courageously protects Syria and provides security for its people,” and offered prayers for the victims of the April 14 missile strikes.

“We are confident that the army will not bow before the external or internal terrorist aggressions; they will continue to fight courageously against terrorism until every inch of the Syrian land is cleansed from terrorism.

We, likewise, commend the brave stand of countries which are friendly to Syria and its people,” the patriarchs concluded.