Pope Francis in 2016: On the move and moving ahead 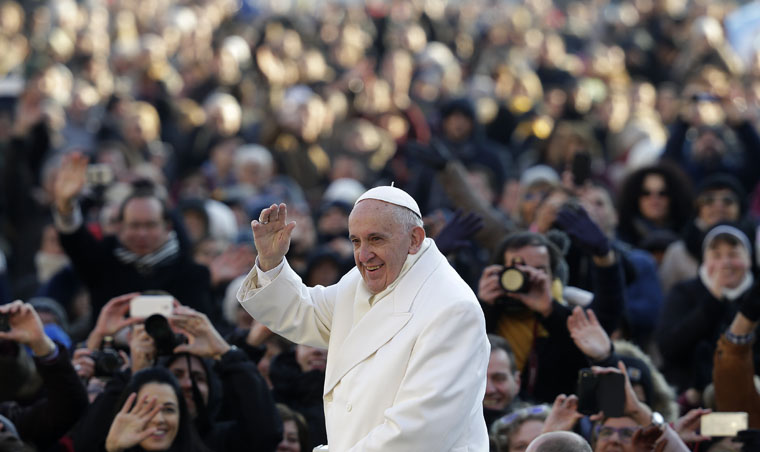 VATICAN CITY (CNS) — When Pope Francis established the Year of Mercy, a full slate of Jubilee events was slotted into his already packed calendar for 2016.

A typical “business as usual” year for a pope is already full with meetings, liturgies and foreign trips.

But then add the extraordinary Jubilee Year, which will run until Nov. 20, and the pope will now preside over at least one major public ceremony or event each month. He will carry out a personal “work of mercy” in Rome one Friday a month and lead an extra general audience one Saturday a month in addition to his weekly Wednesday gatherings.

And being the “impromptu” pope who likes to do things that aren’t marked in press office bulletins, 2016 looks like it will keep this 79-year-old pontiff busier than usual.

The only load that has been lightened, at least one that has been announced ahead of time by the Vatican, is there will be no pastoral visits to Italian parishes for the year.

“Due to the intensified commitments for the Jubilee, it is the intention of the Holy Father to postpone pastoral visits in Italy,” the Vatican press office said early December.

But that does not mean he’s putting away his passport, since he still plans pastoral journeys across the globe.

A six-day, six-city trip to Mexico in February has been finalized with almost daily flights out of Mexico City to the “peripheries” to meet with indigenous communities, young people, prisoners and the poor. This will be his fourth visit to Latin America and his 12th trip abroad in his three years as pope.

Pope Francis will take a short flight to Poland for World Youth Day in Krakow in July. So far the unofficial, tentative schedule has the pope attending the last four days of events during the week-long gathering, including a Way of the Cross, a prayer vigil, and the closing Mass where, traditionally, he will announce the next World Youth Day host country.

The Vatican never makes an official announcement of future papal trips until a few months closer to the departure date but, looking at past practice, Pope Francis took five trips abroad each year, trying to hit more marginalized nations and countries with a Catholic minority — especially places where Christians had suffered persecution.

For 2016, one possible stop might be Armenia. He celebrated a special Mass at the Vatican in April 2015 to mark the 100th anniversary of the 1915-18 genocide of up to 1.5 million Armenians at the hands of the Ottoman-Turkish empire.

The pope told journalists in November he had already promised the Armenian Catholic and Orthodox patriarchs he would visit their country.

“I don’t know if this can be done, but the promise has been made,” he said.

When asked about other trips planned, especially for Latin America, he said, “You know, traveling at my age isn’t good for you. You can do it, but it takes its toll.”

However, he will invite the world to come to Rome for a dozen major “jubilees” planned for the Year of Mercy, dedicated to catechists, deacons, priests, religious, the Roman Curia and those administering offices connected with the Vatican, children, the ill, prisoners, and those in need of consolation, to name a few.

He started the new year with opening the last of the four Holy Doors in Rome — the Basilica of St. Mary Major — on the feast of Mary, Mother of God.

He will send out more than 800 missionaries of mercy on Ash Wednesday to go to different parts of the world to be “preachers and confessors of mercy.”

That event will coincide with the relics of St. Padre Pio, a Capuchin priest who bore the stigmata of Jesus, being shown in Rome for the first time. The pope requested the saint’s corpse be exposed for veneration in St. Peter’s Basilica, according to jubilee organizers, to be a sign for the missionaries of how God welcomes those who seek forgiveness.

Pope Francis is expected to canonize Blessed Teresa of Kolkata in early September as the church celebrates the Jubilee for workers and volunteers of mercy.

Beyond the Jubilee, the pope will preside over major traditional liturgical events throughout the year, meet with ambassadors, papal nuncios, Vatican officials and groups from all over the world.

He will also visit Rome’s synagogue Jan. 17 and meet with the city’s Jewish community, making it the third time a pope has visited the city’s place of worship.

He gave more than 200 speeches in 2015, and it’s quite likely a similar stream of encounters will continue with scripted or off-the-cuff talks to kids, teachers, religious men and women, Catholic associations and experts attending Vatican-sponsored conferences. It is in these addresses that the pope often outlines what needs to be done in the world — as a disciple of Christ or a man or woman of good will.

Observers expect him to issue his second apostolic exhortation in 2016, following the conclusion of two gatherings of the Synod of Bishops on the family in 2014 and 2015.

As far as major meetings, he will probably convene the world’s cardinals in February as he did the last two years. Such consistories offer the pope a chance to hold working meetings on some of his most urgent priorities and tap into the College of Cardinals as an advisory body as well as vote on upcoming saints’ causes.

The pope’s smaller consultative body, the Council of Cardinals or the C9, will come together in February, too, beginning their cycle of five scheduled gatherings for the year dealing with internal issues of reforming the Vatican’s structures and processes.

Their next working sessions, which will last for three days instead of two starting in April, will be dedicated to drawing up details for a new Vatican congregation merging offices dealing with justice, peace, migration and charity. The pope is also expected to release further details about the already announced establishment of a new office for laity, family and life.

As far as time off? Pope Francis does staycations. Almost all audiences and meetings will be suspended for a few weeks in the summer. But he’ll be busy nonetheless, as he uses the short lull to play catch-up on paperwork, upcoming documents and personally responding to letters, especially from friends and acquaintances — a habit he had as archbishop of Buenos Aires, Argentina, and tries to stay true to as pope.