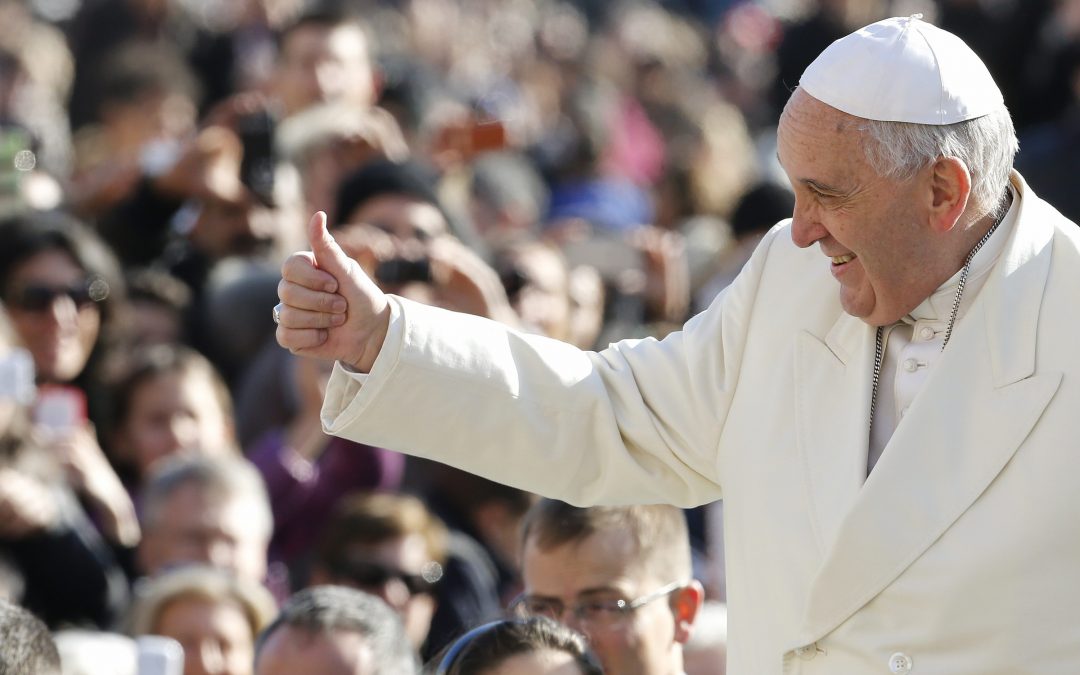 VATICAN CITY (CNS) — In word and deed, Pope Francis will take his vision of a Catholic’s approach to family life, parish life, charity, economics, immigration and good governance to Cuba and the United States during a Sept. 19-27 visit.

Visiting both Cuba and the United States on the same trip not only acknowledges his role in encouraging detente between them, but will give Pope Francis an opportunity to demonstrate that while different political and cultural challenges face Catholics in both countries, the Gospel and its values are the same.

On June 30, the Vatican published the detailed schedule of Pope Francis’ Sept. 19-22 visit to Cuba and his Sept. 22-27 visit to the United States. [Scroll to bottom to see the itinerary in full.]

For Pope Francis, one of the key values Catholics in the U.S. and Cuba share is the obligation to “go out,” proclaiming the Gospel and bringing God’s mercy to the poorest and most disadvantaged people.

The standard of living in the United States may be exponentially higher than in Cuba, but in Pope Francis’ vision that only increases the responsibility of U.S. Catholics to reach out and to share. He will demonstrate what he means when he meets homeless people in Washington Sept. 24, children and immigrant families at a Catholic school in Harlem when he visits New York Sept. 25, and prisoners Sept. 27 in Philadelphia.

With the Catholic Church’s constant concern for promoting strong families and with the world Synod of Bishops on the family set to start one week after the papal visit, marriage and family life are expected to be topics throughout the pope’s visit to both Cuba and the United States.

Long before the Vatican released the full trip itinerary, it had confirmed certain parts of it: U.S. President Barack Obama will welcome the pope to the White House Sept. 23; that afternoon, Pope Francis will celebrate Mass at the Basilica of the National Shrine of the Immaculate Conception and canonize Blessed Junipero Serra; the pope will address a joint meeting of Congress Sept. 24, becoming the first pope to do so; and Pope Francis will address the U.N. General Assembly Sept. 25. It is thought the pope may bring up some of the points he made in his recent environmental encyclical, “Laudato Si’,” given that world nations will come together just a few months later for the United Nations Climate Change Conference in Paris in the hopes of reaching global agreement on reducing greenhouse gases.

The pope also is expected to emphasize the contributions of U.S. Catholics to society, defend religious liberty and support the church’s right to uphold its teaching, including in its employment practices. He will use his visit to ground zero in New York as an occasion for an interreligious gathering.

The pope will spend three days in Cuba visiting three different cities, including the popular Shrine of Our Lady of Charity of El Cobre.

He will hold the usual meetings with President Raul Castro, young people, families and religious as well as celebrate Mass and vespers all three days. But he also will bless the cities of Holguin and Santiago de Cuba — blessing Holguin from a panoramic hilltop and pilgrimage site called Cross Hill.

It will be his third visit to the Americas after Brazil in 2013 and Ecuador, Bolivia and Paraguay in July, and his 10th trip abroad since his election in 2013.

The schedule for the trip appears below. All times are local unless otherwise indicated.

·       5:15 p.m. Celebration of vespers with priests, religious and seminarians in Havana’s cathedral. Homily by pope.

·       11 a.m. Meeting with families in the Cathedral of Our Lady of Assumption in Santiago de Cuba. Speech by pope. Blessing of the city from the outside of the cathedral.

·       9:15 a.m. Welcoming ceremony on the South Lawn of the White House. Speech by pope, followed by a courtesy visit with Obama.

·       4:15 p.m. Mass and canonization of Blessed Junipero Serra in the Basilica of the National Shrine of the Immaculate Conception. Homily by pope.

·       4 p.m. Visit to Our Lady Queen of Angels Catholic Elementary School in East Harlem and meeting with children and immigrant families. Speech by pope.

·       4:45 p.m. Meeting for religious liberty with the Hispanic community and immigrants at Philadelphia’s Independence Mall. Speech by pope.

·       9:15 a.m. Meeting with bishops taking part in the World Meeting of Families at the St. Charles Borromeo Seminary. Speech by pope.

·       11 a.m. Visit with prisoners at the Curran-Fromhold Correctional Facility. Speech by pope.

·       4 p.m. Closing Mass of the VIII World Meeting of Families at the Benjamin Franklin Parkway. Homily by pope.

·       7 p.m. Greeting to the organizing committee, volunteers and donors at Philadelphia’s International Airport. Speech by pope.