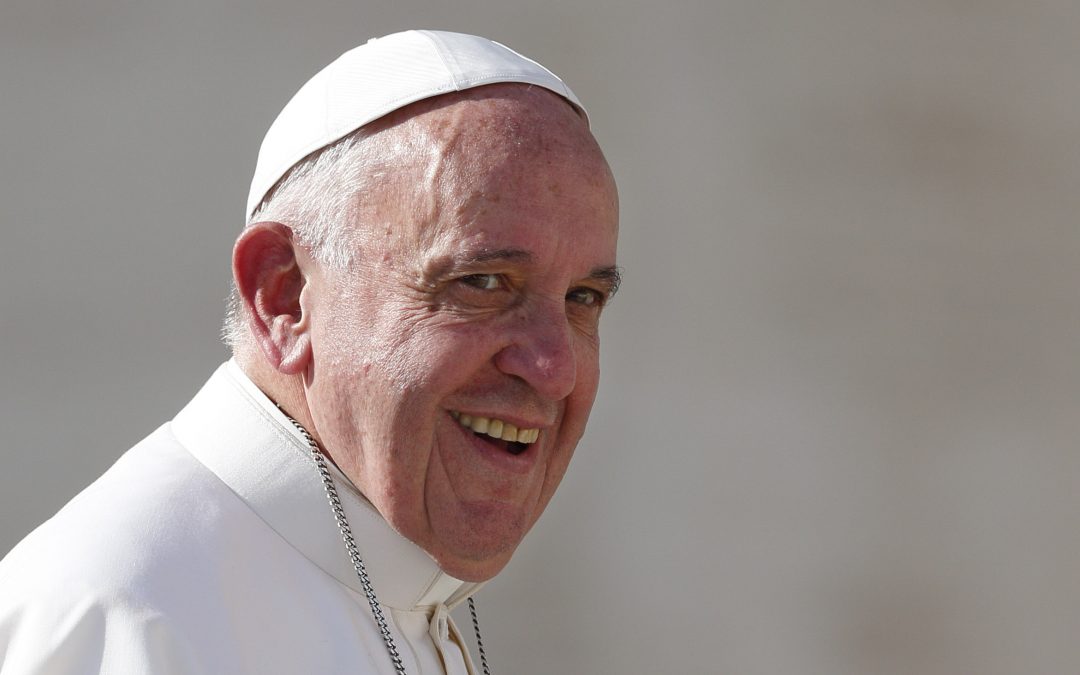 By Junno Arocho Esteves, Catholic News Service
VATICAN CITY (CNS) — Inundated with requests from major media outlets around the world, Pope Francis chose to sit down for an interview with a homeless man who makes his living selling newspapers in Netherlands.

The pope met with 51-year-old Marc, who was accompanied by Frank Dries, the Straatnieuwsnewspaper’s editor; Stijn Fen, a journalist; and Jan-Willem Wits, the former spokesman of the Dutch bishops’ conference. The interview, which took place at the Vatican Oct. 27, was published Nov. 6.

The interview began with a question about the pope’s early days in Buenos Aires, Argentina, where the young Jorge Mario Bergoglio would often sneak out of his home to play soccer with his classmates. The pope admitted that although he loved to play, he wasn’t exactly a star athlete.

“In Buenos Aires, those who played soccer like me were called ‘pata dura,’ which means ‘having two left feet.’ I played; I was the goalie many times,” he said.

The pope’s personal commitment to those in need was also rooted in his childhood, he said, recalling the poor Italian woman who worked as his family’s housekeeper. Her poverty, he said, “struck me” and his mother often gave her necessities that she lacked for her own family.

The woman eventually went back to Italy and returned to Argentina many years later when the pope was archbishop of Buenos Aires.

“I accompanied her until she died at 93 years old. One day she gave me a Sacred Heart of Jesus medal that I carry with me every day,” the pope said, adding that it serves as a daily reminder of how she and many others suffer due to poverty.

When asked if he fears that people will grow tired of his defense of the poor and of refugees, the pope noted that while he does feel that some may be tired of it, “it does not scare me. I must continue to speak the truth and how things are.”

“It is my duty, I feel it inside me. It is not a commandment, but as people, we all must do it,” he said. Pope Francis stressed that the church must also be “a witness of poverty,” but there are also temptations to lead by words alone and not by deeds. “If a believer speaks about poverty or the homeless and lives the life of a pharaoh: this cannot be done,” he said.

He also warned against the dangers of corruption in both political and religious life, recalling that during the Falklands War with Great Britain, many people, including Catholics, would take home the food and supplies they had been tasked with distributing to others.

Regarding the fact that, as pontiff, he is confined “like a prisoner in the Vatican,” the pope was asked if he had a desire to switch places with a homeless person.

The pope compared his life to the Mark Twain classic, “The Prince and the Pauper,” saying that while the prince lacks nothing and even has friends, he still lives in a “gilded cage.”

Asked if he ever dreamed of becoming pope, Pope Francis replied with a categorical “no,” adding that as a child, he had very different aspirations.

He said, “I would go grocery shopping with my mother and grandmother. I was very small, I was 4 years old. And once they asked me, ‘What do you want to be when you grow up?’ I answered, ‘A butcher!”