Pope goes back to school, meets students, community in Harlem 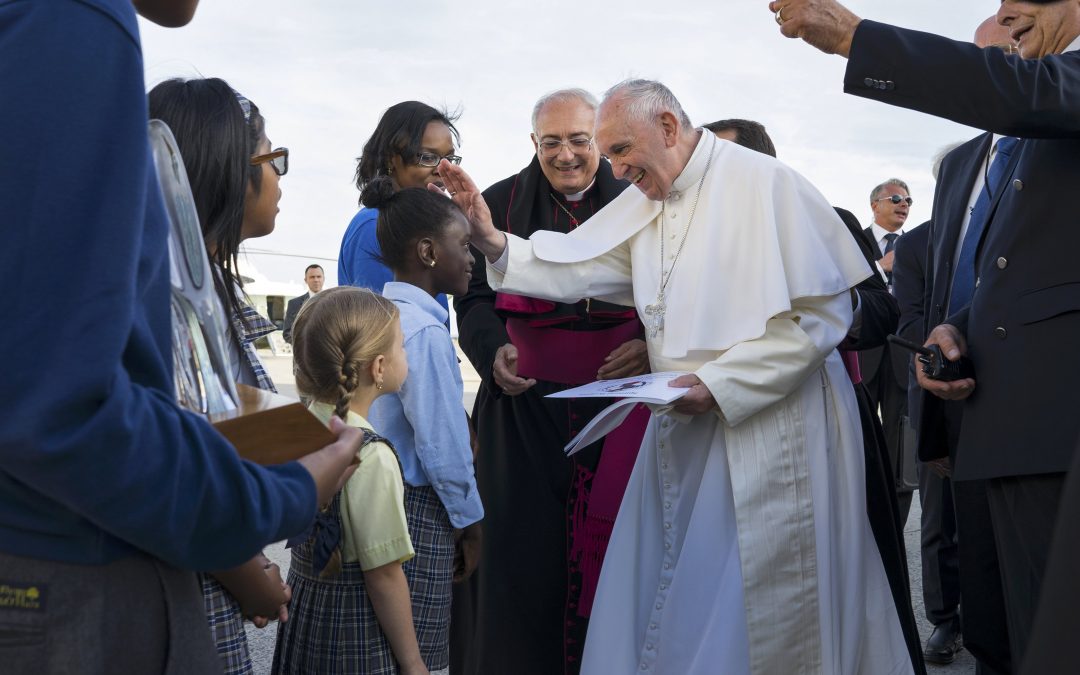 NEW YORK (CNS) — Pope Francis encouraged an audience of Catholic school students and immigrants to live with joy and dare to dream. He also highlighted the immigrant experience — in a way children could understand, comparing it to seeking acceptance and making friends in school, not always an easy place for them to fit in or find their way.

“They tell me that one of the nice things about this school is that some of its students come from other places, even from other countries,” Pope Francis told students and a group of immigrants at the Our Lady Queen of Angels school, where he visited Sept. 25.

“I know that it is not easy to have to move and find a new home, new neighbors and new friends,” the pope said. “At the beginning it can be hard. … Often you have to learn a new language, adjust to a new culture. … There is so much to learn! And not just at school.”

The message, spoken simply, continued the pope’s call for inclusive attitudes and actions in favor of immigrants, who often occupy the peripheral places to which he has called on Catholics to carry the Gospel. Immigrants at the school greeted him personally, engaged in small talk and read from the Gospel of Matthew, Chapter 25. “I was a stranger and you welcomed me.”

The Our Lady Queen of Angels School serves Spanish Harlem, a section of New York originally home to African-Americans, then newcomers from Puerto Rico and the Dominican Republic. Mexicans have arrived in large numbers of late.

Some residents expressed hope the pope would speak to the immigration issue and bring about better relations between immigrant groups in the area.

“We’re all immigrants here. We came searching for a better life,” said Vianel Garcia, manager of a hair salon across the street from the school — which was adorned with posters asking the pope to “come and bless us.”

“I’d like to hear a message of unity between all Hispanics,” she added.

While at the school, the pope spoke of dreams and invoked another religious leader, the Rev. Martin Luther King Jr., whom he had also highlighted in his speech to Congress.

“Wherever there are dreams, there is joy, Jesus is always present,” he said.

But he warned that someone wanted to sow distrust, envy, evil desires and stealing dreams: the devil.

“He does not want us to be happy,” Pope Francis said.

The pope’s visit to Our Lady Queen of Angels was a reminder of the role of Catholic education and its historic mission in parish communities of stressing academics and imparting church values to generations of children, often immigrants, struggling to adjust to a new country and culture.

“What we’re seeing is a lot of lay involvement” and “social entrepreneurship,” Father Scully said.

Many of the students in Catholic schools are non-Catholics — and many come from immigrant families: 69 percent of the students at Our Lady Queen of Angels were from such backgrounds.

“The evidence is clear that the greater the disadvantage, the greater the advantage of Catholic education” in helping students to overcome it, Father Scully said. “The pope is trying to underscore the importance of this civic asset.”

Pope Francis and the students prayed the Hail Mary; students then showed him science projects highlighting environmental themes. They even showed him a touch screen, with one girl advising the pope to double-click.

He started his speech with an apology for taking the students from their studies and ended by assigning homework.

“Please don’t forget to pray for me, so that I can share with many people the joy of Jesus,” the pope said. “And let us also pray so that many other people can share the joy like yours.”