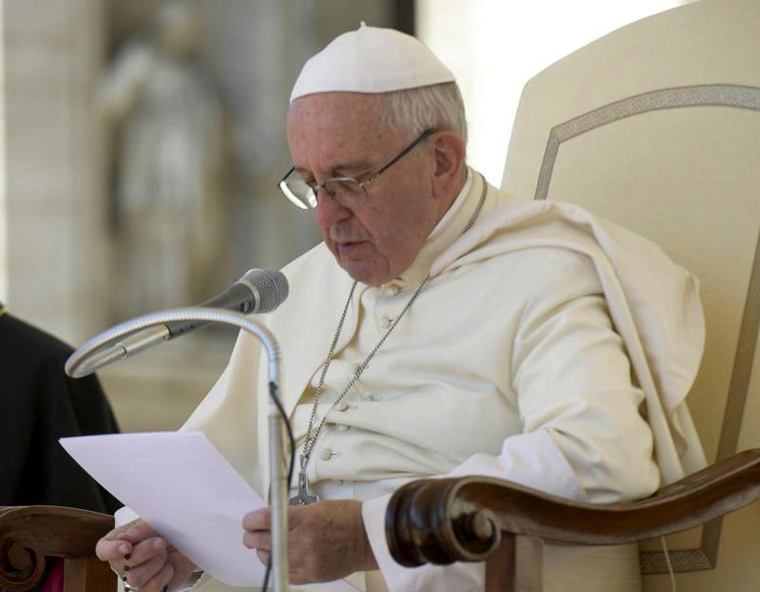 VATICAN CITY (CNS) — Hearing the mayor of Amatrice in central Italy say his town no longer exists and knowing there were children who died Aug. 24 in the earthquakes that struck the region, Pope Francis turned his weekly general audience into a prayer service.

Beginning the audience in St. Peter’s Square, Pope Francis said he had prepared a normal audience talk on how the merciful Jesus is close to people, but given the devastation in central Italy, he decided to lead the recitation of the sorrowful mysteries of the rosary.

Later in the day, the Vatican press office said that as a concrete sign of Pope Francis’ concern for the earthquake victims, six Vatican firefighters had been sent to Amatrice. They will work under the direction of the Italian government emergency services in searching for victims and offering them assistance.

Italy’s National Institute of Geophysics and Volcanology reported that the first quake, which registered a magnitude 6.0, struck at 3:36 a.m. with an epicenter about 100 miles northeast of Rome between the towns of Accumoli and Amatrice. The U.S. Geological Survey said the magnitude was 6.2 and the epicenter was closer to Norcia, the birthplace of St. Benedict.

Smaller quakes — at least two of which registered more than 5.0 — continued for several hours after the main quake. By midafternoon, the death toll had reached 73 but was expected to rise.

As emergency workers began digging people out from under the rubble of collapsed buildings and the number of verified deaths climbed, Pope Francis arrived in St. Peter’s Square for his general audience.

“Hearing the news of the earthquake that has struck central Italy and devastated entire areas, leaving many dead and wounded, I cannot fail to express my heartfelt sorrow and my closeness” to everyone in the earthquake zone, especially those who lost loved ones and “those who are still shaken by fear and terror,” the pope said.

“Having heard the mayor of Amatrice say, ‘The town no longer exists,’ and knowing that there are children among the dead, I am deeply saddened,” Pope Francis said.

The pope thanked all the volunteers and emergency workers who were trying to rescue people trapped under the rubble.

Assuring the people in the region of the prayers and “the embrace of the whole church,” the pope asked the estimated 11,000 pilgrims and tourists in St. Peter’s Square to join him in praying that “the Lord Jesus, who is always moved by human suffering, would console the brokenhearted and give them peace.”

At the Benedictine monastery in Norcia, a community growing in fame because of its prayer life and brewery, the 15 monks and five guests were already awake when the first quake hit, Benedictine Father Benedict Nivakoff told Catholic News Service. Aug. 24 is the feast of St. Bartholomew and “on feast days we get up earlier” to pray, he said.

“All of the monks and the monks’ guests are safe,” he said. But the Basilica of St. Benedict suffered “considerable structural damage,” and the monastery will need repairs as well.

Within a half hour of the first quake, Father Nivakoff said, the square outside the monastery was filled with people “because it is the safest place in town — around the statue of St. Benedict.”

While no buildings collapsed, it is obvious that many homes are no longer habitable, he said. The monks have set up a reception desk to help meet their neighbors’ needs.

The basilica, he said, is closed pending an inspection by civil engineers, who were to arrive the afternoon of Aug. 24. However, Father Nivakoff said, “the facade seems to have detached” from the rest of the building and major repairs are likely.

Assisi is just 45 miles from Norcia and, according to Franciscan Father Enzo Fortunato, the quake was felt strongly at the convent and basilica that suffered major damage from an earthquake in 1997.

Father Fortunato told the Italian news agency ANSA that the quake woke all the friars, many of whom ran to the Basilica of St. Francis. No damage was visible, he said.