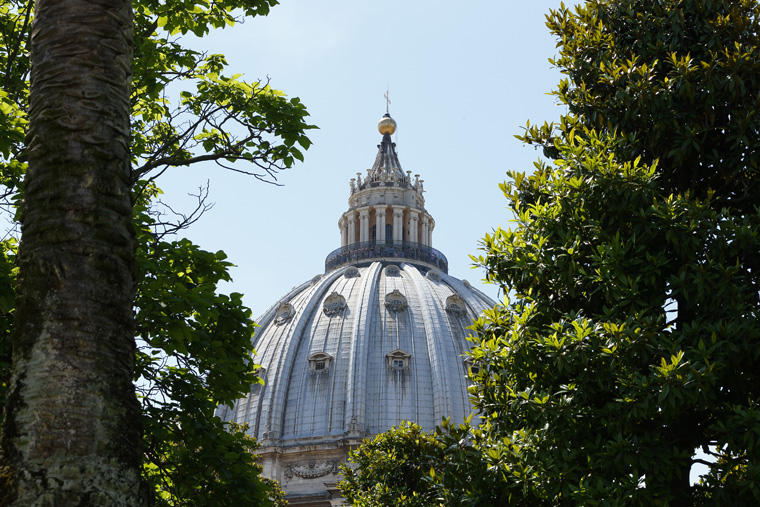 The dome of St. Peter’s Basilica at the Vatican is framed by trees June 14. Abuse accusations against U.S. Archbishop Theodore E. McCarrick will be “examined in a regular canonical trial,” the Vatican press office announced July 28. Until then the former cardinal has been ordered to pray and do penance. (CNS photo | Paul Haring)

VATICAN CITY (CNS) — Protecting human dignity and human rights must always be at the heart of any action by world leaders to confront the many humanitarian crises afflicting today’s world, Pope Francis said.

Meeting with new, non-resident ambassadors to the Vatican Dec. 13, the pope noted the 70th anniversary of the Universal Declaration of Human Rights and said governments must ensure the document continue to “guide the efforts of global diplomacy to secure peace in our world and to promote the integral development of each individual and all peoples.”

“It is essential that respect for human dignity and human rights inspire and direct every effort to address the grave situations of war and armed conflict, crushing poverty, discrimination and inequality that afflict our world and in recent years have contributed to the present crisis of mass migration,” he said.

After receiving their letters of accreditation, the pope welcomed the 10 new ambassadors who hailed from Switzerland, Malta, the Bahamas, Cape Verde, Estonia, Iceland, Turkmenistan, Grenada, Qatar and Gambia.

He also expressed hope that they may contribute to “securing a peace based on justice and charity” in their respective missions to avoid repeating the errors of the past that led to the “senseless slaughter” of the first World War.

“May the lessons learned from the two great wars of the 20th century, which led to the establishment of the United Nations Organization, continue to convince the world’s people and their leaders of the futility of armed conflict and the need to resolve conflicts through patient dialogue and negotiation,” the pope said.

All countries bear a “moral responsibility” to address the migration crisis and other humanitarian issues, Pope Francis said. He also expressed the church’s commitment to ensure that “those who knock at our doors in search of a secure future for themselves and their children” are welcomed, protected, promoted and integrated.

The church, he said, “is committed to working with every responsible partner in a constructive dialogue aimed at proposing concrete solutions to this and other urgent humanitarian problems, with the goal of preserving human lives and dignity, alleviating suffering and advancing an authentic and integral development.”