Pope says he was surprised by crowds, joy in Africa 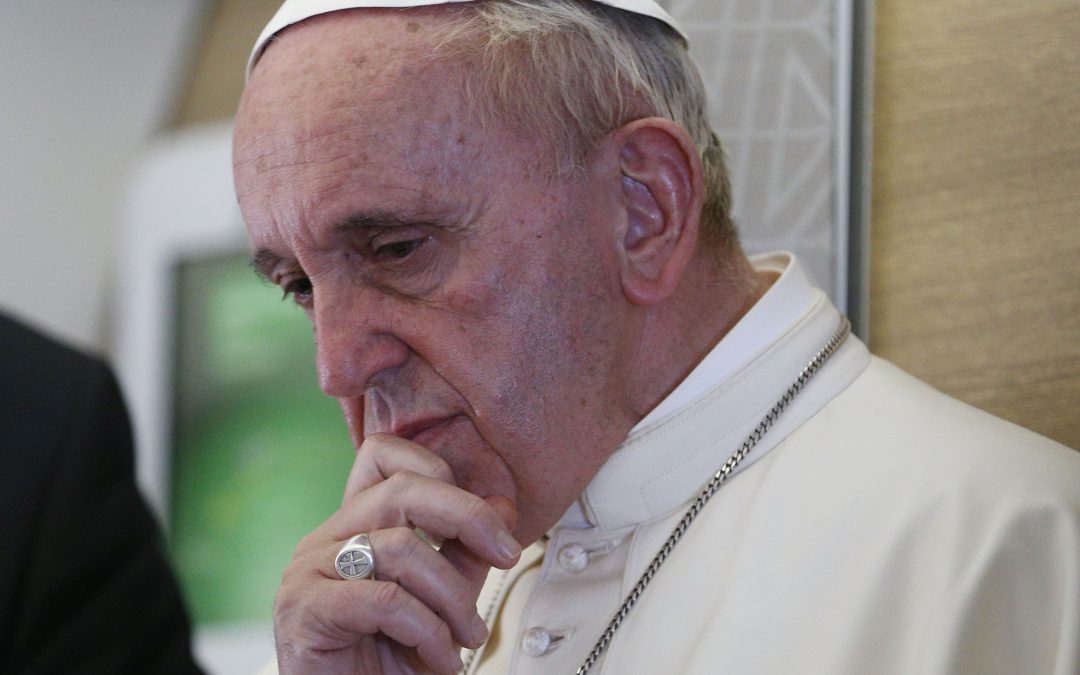 ABOARD THE PAPAL FLIGHT FROM AFRICA (CNS) — Pope Francis told reporters he is well aware that God is a god of surprises, but he had not been prepared for what a surprise his first visit to Africa would be.
Obviously tired, but equally content, Pope Francis told reporters he prayed in a mosque in Bangui, Central African Republic, and rode around a Muslim neighborhood with the imam seated with him in the popemobile. Both were spontaneous initiatives of the pope Nov. 30, his last day in Africa.

Returning to Rome from Bangui later that day, the pope spent more than 60 minutes with reporters in the back of his plane, responding to their questions.

“The crowds, the joy, the ability to celebrate even with an empty stomach” were impressions the pope said he would take home with him after his six-day trip to Kenya, Uganda and the Central African Republic.

After two years of civil war, the pope told reporters, the people of the Central African Republic want “peace, reconciliation and forgiveness.”

“For years, they lived as brothers and sisters,” the pope said, and local Catholic, Muslim and evangelical Christian leaders are doing their best to help their people return to that situation of peace, coexistence and mutual respect.

Leaders of every religion must teach values, and that is what is happening in Central African Republic, Pope Francis said.

“One of the most-rare values today is that of brotherhood,” a value essential for peace, he said.

“Fundamentalism is a disease that is found in all religions. We Catholics have some,” he said. “I can say this because it is my church.”

“Religious fundamentalism isn’t religion, it’s idolatry,” he told the press. Ideas and false certainties take the place of faith, love of God and love of others.

“You cannot cancel a whole religion because there is a group or many groups of fundamentalists at certain moments of history,” the pope said.

As the pope ended his trip, global representatives were beginning the U.N. climate conference in Paris to discuss the possibility of forging a binding international agreement to reduce climate change.

Pope Francis said he was not sure what would happen at the conference, “but I can say this, it’s now or never.” Too little has been done over the past 10-15 years, he said, and “every year the situation gets worse.”

“We are on the verge of suicide, to put it strongly,” he said.

Given his visits to Uganda and Kenya, where new HIV infections and AIDS-related deaths continue, Pope Francis was asked if he thought the church “should change its teaching” about the use of condoms.

Pope Francis responded that an ongoing question for Catholic moral theology is whether condoms in that case are an instrument to prevent death or a contraceptive — in which case they would violate church teaching on openness to life.

But, he said, the question is too narrow. People are dying because of a lack of clean water and adequate food. Once the world takes serious steps to solve those problems, then it would be “legitimate to ask whether it is licit” to use condoms to prevent the spread of HIV and AIDS.

Pope Francis said that at various moments of his trip, he visited the very poor, people who lack everything and have suffered tremendously. He said he knew that a small percentage of people — “maybe 17 percent” — of the world’s population controls the vast majority of the world’s wealth — “and I think, ‘How can these people not be aware?’ It’s such suffering.”

To say the world’s economy has put profits and not people at the center and to denounce “the idolatry of the god money,” he said, “is not communism. It’s the truth.”

The pope also was asked about the Vatican trial underway in connection with the leak and publication of confidential documents related to Vatican finances.

“I haven’t lost any sleep” over the leaks and the arrest of a monsignor, his assistant, a woman who served on a former Vatican commission and the two authors who wrote books allegedly based on the material, Pope Francis said.

However, he said, he had hoped the trial would be over before the opening Dec. 8 of the Year of Mercy, but he does not think that will be possible because the defendants’ lawyers need adequate time to defend their clients properly.

As for future trips, Pope Francis was not full of surprises. He said he plans to go to Mexico and visit cities where St. John Paul II and Pope Benedict XVI never went. The trip is expected in late February.

Pope Francis said he has to go to Mexico City, “but if it wasn’t for Our Lady I wouldn’t.” So he will visit the Shrine of Our Lady of Guadalupe in Mexico City, then go to Chiapas, Morelia and, “almost for sure, on the way back to Rome, I will spend a day or part of a day in Ciudad Juarez,” on the Mexican-U.S. border.