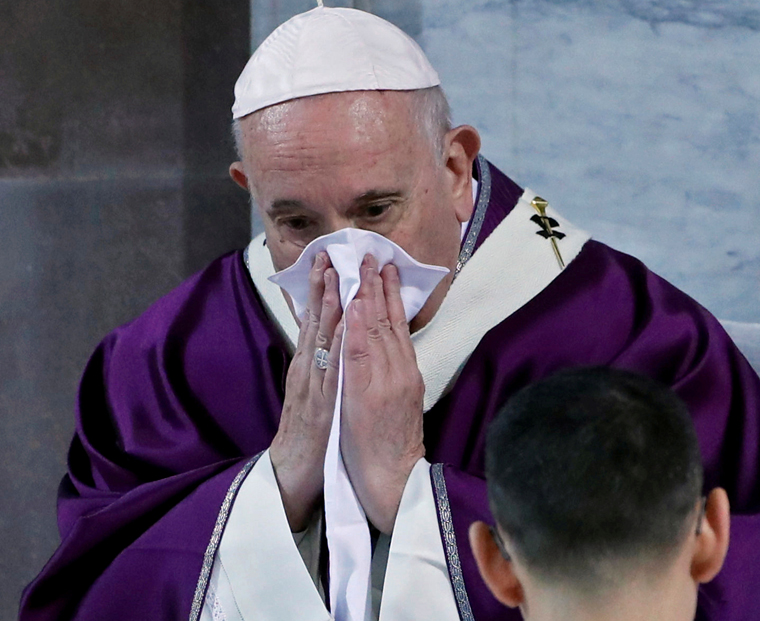 VATICAN CITY (CNS) — Pope Francis did not attend a traditional penitential service with priests of the Diocese of Rome due to a mild cold, the Vatican said.
In a statement Feb. 27, Matteo Bruni, director of the Vatican press office, said that due to “a slight indisposition,” the pope preferred to remain close to the Domus Sanctae Marthae, where he lives.

However, “other commitments will proceed normally,” Bruni said. According to the Vatican, the pope met with members of the Global Catholic Climate Movement in one of the meeting rooms of the Paul VI audience hall.

News of the pope’s cold comes as Italy has been on high alert due to the spread of the coronavirus. According to the Italian civil protection service, 528 people have been infected with the virus as of noon Feb. 27. Twelve, and perhaps, 14 people have died, the office said. The majority of people infected are located in the northern Italian regions of Lombardy and Veneto.

During his weekly general audience Feb. 26, the pope reduced his contact with people in St. Peter’s Square, shaking hands with only a few people before beginning his talk. The pope circled the square in the popemobile, waving and blessing people from afar, and the driver and the pope’s security detail did not stop to pick up any children as is customary.

At the end of his audience, the pope assured all those affected by the coronavirus of his closeness and prayers. He said his prayers were also with the health care professionals and public officials who were working hard to help patients and stop the spread of the disease.

Lazio, the region surrounding the Vatican, has had three confirmed cases of coronavirus infection, including a married couple from Wuhan, China, the epicenter of the outbreak. All three have recovered from the virus and will soon be released from the hospital, the health ministry said.