Pro soccer player attributes his strength to his faith 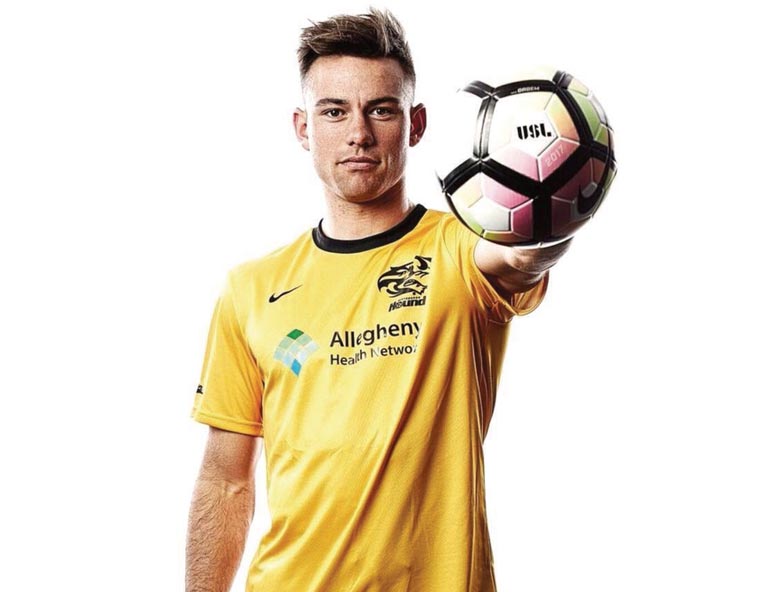 PITTSBURGH (CNS) — Taylor Washington, a defender for the Pittsburgh Riverhounds soccer team, says he keeps God at the center of his life and that even during games when he’s in a competitive mindset, he’ll often pray a Hail Mary or a Glory Be.

“Why I’m so strong is because of Christ,” he said. “Everything that he’s done for me and all the blessings I’ve received in my life are because of him. At times, it’s overwhelming. I just have to give thanks.”

Washington attends daily Mass and goes to confession. Before games he reads Scripture passages and prays a St. Jude chaplet. And before stepping onto the field, he says a prayer to St. Michael for protection.

That wasn’t always the case, though. Washington, who was raised Catholic in Somers, New York, attended Mass with his parents on Christmas and Easter and maybe a few other times during the year. He developed more of an appreciation of his faith during Catholic school but by the time he was a freshman at Boston University, where he played on the Division I soccer team, religion had little or no part in his routine.

“God wasn’t the center of my life and he might have been the last thing that I would resort to,” he told the Pittsburgh Catholic, diocesan newspaper. “Only if I was in a tough situation would I pray. I felt completely lost. I was having a lot of success on the soccer field at that time.”

But he was also struggling with a 1.7 grade-point average, suffering with mononucleosis and a diagnosis of dyslexia. He wanted to break out of this torment, but really wasn’t sure how to do so.

The sign he needed came one random afternoon as he sat in an empty classroom on campus.

“I remember sitting at a desk — I can’t make this up — and I saw a gold light. The weight of everything was just lifted off of me. I hadn’t thought about church and I hadn’t gone in forever, but I just felt compelled to go to church and I didn’t miss a Sunday Mass after that.”

After this experience, which Washington feels is still constantly evolving in his life, he transferred to George Mason University in Virginia where he continued to play soccer and earned All-Conference honors. When he graduated in 2016, he was named George Mason’s Student-Athlete of the Year.

Off the field, Washington became involved in George Mason’s Catholic campus ministry team and served as the large-events coordinator for the student ministry team.

“That was a complete blessing to be around people my age who shared the same Catholic faith,” he said. “It was a very humbling experience because they keep you in check. I had to make a lot of adjustments in my life.”

Last December Washington signed a one-year deal with a club option for 2018 with the Riverhounds.

He said he has been able to enjoy the Catholic environment of Pittsburgh and has gotten to know a few priests. On most of his off days, he spends time volunteering at Children’s Hospital of University of Pittsburgh Medical Center.

“People will tell me that what I’m doing is so great, but it’s not really what I’m doing, it’s God working through me. I’ve been given such a blessing to have the platform to do this. I feel like if I weren’t doing these things, it would be a waste. I’m not going to be a professional athlete forever, so I think God has called me to help in kids’ lives. In turn, they help my life more than I am helping them.”

Washington also has aspirations to play soccer at the highest level possible.

“The dream is to play in Europe,” he said. “I believe that through prayer and steadfastness, it can happen.”

“Tweeting about things like Christ’s love, God’s mercy and church teachings are nothing compared to all the things that he’s done for me,” Washington said, adding: “The little things I do every day don’t amount to any worthiness to him, but I try to honor him in everything I do.”

Peaslee is associate editor for the Pittsburgh Catholic, newspaper of the Diocese of Pittsburgh.