Father Mark Kaminski dedicates himself to the priesthood and learning 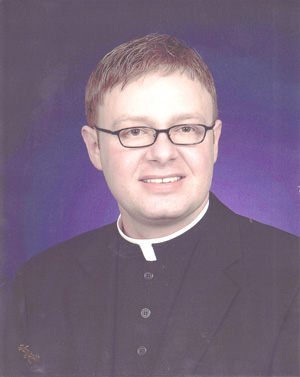 “I started out in medical school, and I decided after one semester to go into a seminary. There’s so much more to life,” he said. “I just had the desire to create something much larger than what we create in our everyday life.”

So instead, he entered the seminary and earned two doctorates in quick succession, becoming Professor Mark Kaminski in academic circles.

Father Kaminski was born in Glogow, a city of about 74,000 near the western border of Poland, but he grew up in Bonn, which was the capital city of Germany until reunification in 1990.

He was a teenager when the Berlin Wall fell, but he said he can remember the sheer elation of the time. “It was just a time of overall joy,” he said.

In 1996 he moved from Europe to Detroit, where he enrolled in Ss. Cyril and Methodius Seminary.

“That was quite a change, I guess, but I was always a city boy,” Father Kaminski said.

He was ordained on June 2, 2001 and two years later he completed a degree in theological literature from the University of Cologne in Germany. His thesis considered the work of German Jesuit Karl Rahner.

“He definitely reshaped our way of looking at the church and who we are as the community of believers,” Father Kaminski said. Rahner played an integral role in the Vatican II process. He offered new ways of thinking about issues of faith and salvation, and he opened up avenues of communication for interreligious dialogue. Rahner also put forward the theory that everyday language cannot possibly accommodate or fully express the relationship between mankind and the divine, Father Kaminski said.

“My work was looking at the correlation between literature and theology in Rahner’s works,” he said. “I was trying to prove that he came up with his own literary style.” His thesis work gave him the opportunity to interview then-Cardinal Joseph Ratzinger.

Five years later, in 2008, Father Kaminski earned another doctorate from Catholic University in Washington, DC. This time, the degree was in pastoral theology. His thesis was entitled “Canonical and Administrative Foundations of Parish Leadership” and the specific model he put forward in the work is being implemented already to help train deacons to lead parishes.

He also helps coordinate pastoral theology and pastoral field education courses for deacons. Father Kaminski said he really enjoys working with the deacons and their families. “It’s one of my key jobs that I do for the diocese and it truly gives me great joy,” he said.

Father Kaminski came to the Syracuse Diocese after ordination. When he first arrived, Father Kaminski said he was drawn to the sense of fraternity among the priests and the involvement of people in the parishes. “I absolutely loved what I saw,” he said.

Now, Father Kaminski is the pastor of St. Anthony of Padua Church, St. Mary’s School, and St. Mary Church in Cortland. He also serves as the chaplain at SUNY Cortland, where he has ministered since 2003.

As director of continuing education for the clergy for the Syracuse Diocese, he coordinates the priests’ convocation in Alexandria Bay each summer. He also helps to coordinate a workshop for new pastors and administrators in the five dioceses of upstate New York called Upstate Update.

When asked what he does in his down-time, Father Kaminski laughs.
“Going from one thing to another gives me energy,” he said.