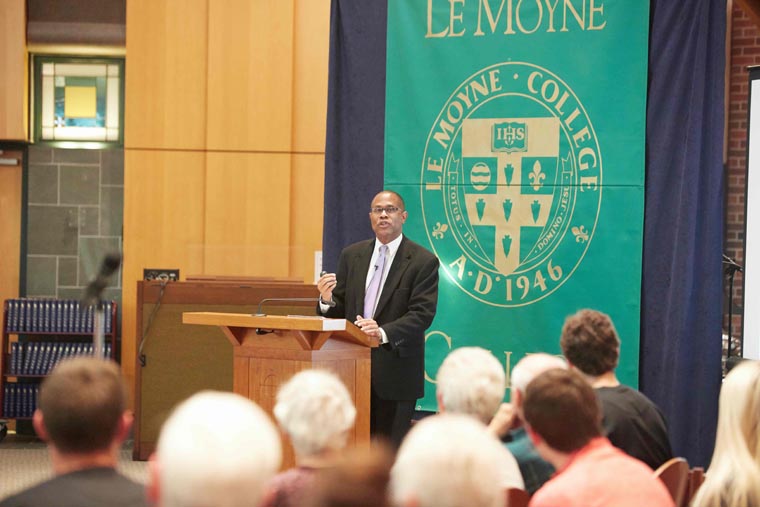 While describing the water crisis in Flint, Michigan, Father Bryan Massingale shared a detail that drew gasps from many in the Le Moyne College audience of 200 people Oct. 18: When one local mother worried about long-term effects of the polluted water on her son, a public official reportedly said, “What’s the loss of a few IQ points for someone who’s destined to be a janitor anyway?”

Almost immediately after officials in April 2014 changed the city’s water source to the untreated Flint River, residents report discoloration and chemical smells and rashes and nausea. In August 2014, the city announced a boil water advisory, and in October General Motors stopped using Flint tap water in its Flint plant because of concerns the water could corrode parts in its manufacturing process.

Despite these concerns, it was only in January 2016 that Michigan’s governor declared a state of emergency because of high lead levels in Flint’s water.

No majority white, affluent community would have experienced such delays or incompetence, according to Father Massingale. “Race and poverty play decisive roles in what’s still unfolding,” he said. “The water is still not fit for human consumption.”

Poor black people lack political clout to influence policy, he said. Too many in the Catholic Church, he added, remain silent to environmental racism, instances in which poor communities and communities of color become “sacrifice zones” of environmental degradation or disposal sites for unwanted waste.

His lecture, “Environmental Racism and the Silence of the Faith Community,” was co-sponsored by the Justice and Peace Committee of the Roman Catholic Diocese of Syracuse and the Sanzone Center for Catholic Studies and Theological Reflection. He spoke at Le Moyne’s Panasci Family Chapel.

Massingale, a priest of the Archdiocese of Milwaukee, is professor of theological and social ethics at Fordham University in New York. He previously taught at Marquette University, where in 2009 he received the highest award for excellence in teaching. His well-regarded book, Racial Justice and the Catholic Church (Orbis, 2010), won a first-place book award from the Catholic Press Association.

Flint’s water crisis was “not deliberate, conscious and intentional” racism, he said. Unconscious racism, though, occurs because Americans share “a long history which predisposes us, shapes us, informs us” about black-skinned people since 1619, when white business owners brought the first enslaved people here.

Discussions about race, he added, make Catholics uncomfortable. The American Catholic Church understands “itself as being a white institution,” favoring “those who emigrated from Europe and their descendants.”

Nature cannot be regarded as something separate from ourselves or as a mere setting in which we live. Recognizing the reasons why a given area is polluted requires a study of the workings of society, its economy, its behaviour patterns, and the ways it grasps reality. … We are faced not with two separate crises, one environmental and the other social, but rather with one complex crisis which is both social and environmental. Strategies for a solution demand an integrated approach to combating poverty, restoring dignity to the excluded, and at the same time protecting nature.

Natura Revelata: Finding Nature in All Things in the Jesuit University

The third and final presentation of Sustaining the Earth: Insights from Science and Religion features Catherine Kleier, professor of biology and environmental studies at Regis University and author of Plant Science: An Introduction to Botany for The Great Courses©.