Racing towards the cross 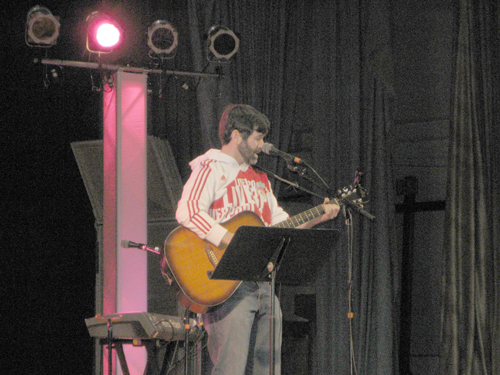 EAST SYRACUSE — When you are 15 years old, it might be a little easier to step out in faith when 10 of your buddies are right there with you.

The idea behind the youth mega events held at Bishop Grimes Jr./Sr. High School and in the Southern Tier youth the weekend of March 5 and 6 is to foster an atmosphere where teens can worship, reflect and grow closer to Jesus while understanding that they are not alone in their longing to do just that. And then there’s a little bit of fun thrown in too.

The day offered workshops on topics such as Theology of the Body, vocations, service projects, prayer, and the saints. There was pizza for lunch, a concert by the Matt Maher Band and Mass and adoration with Bishop Robert Cunningham. There was even a room for the young people to let loose of some energy via some fun and games in the cafeteria.

Bob Rice warmed up the young people with his sense of humor and musical talent. He is on the faculty at Franciscan University at Steubenville and travels extensively as a presenter. Rice promised the audience of 600-plus youth, “Today’s going to be really, really cool.”

Rice described his upbringing in Chicago as “100 percent Irish.” Rice explained to the audience that he is a runner. He even ran in the Chicago marathon with his older sister. His message was for them to keep on the course toward Jesus. “We need to throw everything off that brings us down and keep our eye on Jesus. We need to drop what we’re carrying and just sprint to Jesus,” Rice said.

When he ran the Chicago marathon it happened to be an excruciatingly hot day. Many of the runners dropped out before they finished. Rice said he kept going even when it was unbearable because going the distance was what made the race one of the best experiences of his life. “Anything worth doing is worth giving something up for,” Rice said.

Rice kept his message “all in the family” when he talked about his “Nana” moving in with his family when he was a child. He said she was so religious that her bedroom looked like a religious bookstore. Every Christmas and birthday she gave him a picture of Jesus, “What every 12 year old wants,” he laughed. Rice said he had pictures of Jesus playing soccer, Jesus by the United Nations building with his arm around it, and another one with Jesus depicted with glowing eyes.

“By the time I was in high school I had an odd image of Jesus in my mind,” Rice said.

As he grew older, the message that “Jesus came so that they will have life and have it to the fullest” resonated with him. In fact, he said, it blew him away. “I never imagined by giving my all to Jesus that I would live life to the fullest. I saw following Jesus as ‘don’t do this, don’t do that.’ Jesus is saying it’s not about the ‘no’ it’s about the ‘yes,’” Rice said.

Rice repeated the sentence, “Anything worth having is worth giving things up for” when he talked about meeting his wife and getting married.

He tried through several different stories to convey to the teens how important it is to give up all they seek and look to Jesus because in the end, it is Jesus they are truly searching for.

Rice told the Gospel story of Simon Peter and the fishing boat where Jesus asks the fishermen to cast out their nets. He explained that Simon Peter was a fisherman by trade and that he likely knew the best time to fish and whether or not the nets would be filled that time of day and at that particular place.

“Simon Peter could’ve said, ‘Hey, it’s great you know all about God, but don’t tell me how to fish,’” Rice told the young people. “But Simon Peter was willing to take a chance and to do something stupid for God. And what happened? He brought in a net full of fish.”

Rice said he had thought much about the apostles’ willingness to trust Jesus and abandoned their old ideas and ways of thinking. He said he hoped the young people at the Race 4 the Cross would seek God in their hearts and come to the realization that whatever it is they think they need — popularity, the ability to excel at sports, getting the best girlfriend — they will eventually find their happiness with Christ.

“Christ has led me places I could never have imagined,” Rice said. “He has satisfied the desires of my heart more than I could ever imagine. No one will ever love you like God loves you.”

After Rice’s presentation, the young people broke up into groups  going off to the many workshop offerings available before and again after lunch.

Andrew Prickel, youth minister at Holy Family Church in Fairmount, spoke about saints and how they relate to the lives of the youngsters.

“We’re all called to be saints,” Prickel told them. He also asked the young people who their role models were these days. “Society wants you to believe there is no truth today. I’m here to tell you that’s crap. Jesus is the truth. When nothing is at the center of your life, you insert yourself there.”

Prickel gave several examples of saints, both modern and historical, calling them all “amazing witnesses of the faith.” He told the young people they may not try to be holy because they don’t realize God is calling them to holiness. “Saints fall and fall and fall but they keep getting up,” Prickel said. “Jesus sees something in you that you don’t see in yourself. Jesus Christ is your solid ground. If you want to know who you are, look to Jesus, look to the Father.”

Matt Sugrue came to the Race 4 the Cross and said it was like a “mini-Steubenville conference.” He goes to North Syracuse Junior High School and St. Rose of Lima Church. He said he likes listening to the presenters and would like to go to Steubenville again. Matt was there with some friends from his school. Dan Barbagallo sat with Matt and was glad to spend his Saturday at Race 4 the Cross. “This makes me think about how I talk to people, how I treat people,” he said.

Making the young people think is the result Bob Walters, diocesan director of the Office of Youth & Young Adult Ministry, is looking for. By hosting large scale events, he said, it helps the diocesan youth ministers bring their groups to an annual large event where they might experience “a deep conversion of the heart.”

“In our diocese, with so few paid people given the sole task of youth ministry, we have built a programming structure that allows the volunteer or part-time youth minister the ability to bring youth to the large scale events that focus on a deep conversion of heart so they can focus their efforts on ‘relational ministry’ and ‘youth group’ instead of planning  large scale events.”

The youth ministers can concentrate on their local youth groups and then take them to well-planned larger events. Walters explained that a minimum of 50 adults work at the large scale events.

Walters said he feels the young people are looking for a deep relationship with Christ, even if they do not always realize it.

Large group youth events offer the opportunity of Eucharistic adoration and the sacrament of confession. The large group setting also helps the young people witness that there are hundreds of their peers who are sea
rching for the same thing — a relationship with Christ on a deep sacramental level.

The next large event planned for the youth of the diocese is a trip to the Summer Conference at Franciscan University at Steubenville. Call Walters at (315) 470-1419 for more information about youth and young adult ministry in the diocese.